This is match 1B of iCM Forum's Managers Cup.


Voting Rules:
- You must watch all 3 films before you vote.
- To vote, rank the 3 films from most favorite to least favorite.

The manager that ends at 1st place proceeds to the next round. The ranking of the match will be decided using these rules:
- Ranked by highest average ranking (= lowest number).
- In case of a tie between two movies, head-to-head determines the winner (how many people thought A>B and how many thought B>A).
- In case there's still a tie after the previous rule or there is a tie between three movies, most #1-votes determines the winner.
- Still a tie? Fewest #3-votes determines the winner.
- Still a tie? The match will have a 3 day extension.
- The best two #2-movies (based on average ranking) proceed to the 2nd round as well.
iCM-list of all movies in this Managers Cup

72aicm is going for the first voter award.
ICM-profile
Fergenaprido: "I find your OCD to be adorable, J"
Top

What do I win? An automatic place in the quarters?

Going for the second voter award then...

Liked neither of them but I'm a fan of other works by Rasoulof so I'll give him the edge
"Art is like a fire, it is born from the very thing it burns" - Jean-Luc Godard
Top

Three I had already seen before:

Difficult to rate round this!

Moju is far from the best Masumura has to offer, but I did not dislike it; and I love Masumura.

Goodbye is not a movie with many faults and I guess one could appreciate both the difficult working conditions for everyone involved in this clandestine production and what they are trying to say... but I found the style too heavy handed / on the nose for my taste. Maybe it was only the claustrofobic feelings of all the restrictions that the director wanted to make accesible to the viewer, but it felt more to me like I was tought a lesson (in Dutch there is a saying that translates into something like the director was "waving his finger at me"... not sure if the meaning of that translates...)... I don't like movies like that so much.

The animated short... sure is fun... and I appreaciate all the work needed to make something like it... but is it more special than either an avarage feature from a director I love or a feature I did not like much but could not fault for much and still has some special things going for it...?? no, I don't think so. All the crazy transformations where not thát crazy for me (similar transformations are to be found in the very first animated movie ever made) and besides being entertained for a few minutes there was zero impact for me, nothing to really evaluate or think about (and I am not sure if that would be even the purpose of a work like this anyway... so I can't either fault or praise it for that). So I am confident that it is in third place for me here, but for what the short sets out to do and then does a numerical rating would not be comparable to the other two ratings... so I'll abstain from giving it to avoid needlessly confusing the matter...
Top

This was a rough group for me.

So my top vote goes to Time Out which, while rough around the edges, still had some amount of fun in it.
Last edited by shugs on September 8th, 2021, 3:02 pm, edited 1 time in total.
Top

This was a rough group for me.

So my top vote goes to Time Out which, while rough around the edges, still had some amount of fun in it.

Again three films that didn't really do it for me. Kudos to OldAle1 for finding a Middle-Eastern drama that looked elevated. Môjû could've been a film that I'd liked better, but somehow I don't think the execution was entirely there. It reminded me of a lesser Teruo Ishii film. Aeg Maha, well ... let's say ICM(f) thought me that I'm really not that big of an animation fan after all.

Onderhond wrote: ↑September 8th, 2021, 10:04 pm Again three films that didn't really do it for me. Kudos to OldAle1 for finding a Middle-Eastern drama that looked elevated. Môjû could've been a film that I'd liked better, but somehow I don't think the execution was entirely there. It reminded me of a lesser Teruo Ishii film. Aeg Maha, well ... let's say ICM(f) thought me that I'm really not that big of an animation fan after all.

That's not how I understood the plot
"Art is like a fire, it is born from the very thing it burns" - Jean-Luc Godard
Top

I'm sure your version is the correct one. When the drama doesn't really engage me, but the atmosphere does, I tend to zone out, not really minding the subs anymore. Though it's quite rare for me to be this far off base. Thanks for the rectification!

Nothing that I disliked or thought was mediocre this round.

I liked all of these films, but to varying degrees. Congrats to russa03 for selecting the film that I liked the most out of this lot. I have no idea what on earth was going on plot-wise, but it was wonderfully surreal and dreamlike with nary a boring moment. Also, many thanks to OldAle1 and zzzorf for prodding me to check out a couple of films that I would not have prioritised otherwise. And zzzorf got me another check on the Asian Field Guide list. Only 259 more to go for a Bronze now!

Liked all of these to some extent. Haven't seen Moju in nearly 10 years so a little hard to compare.

Maybe time to have our first graph? I have no idea who's leading
"Art is like a fire, it is born from the very thing it burns" - Jean-Luc Godard
Top

Do I have to see how much I'm losing by, lol
Top 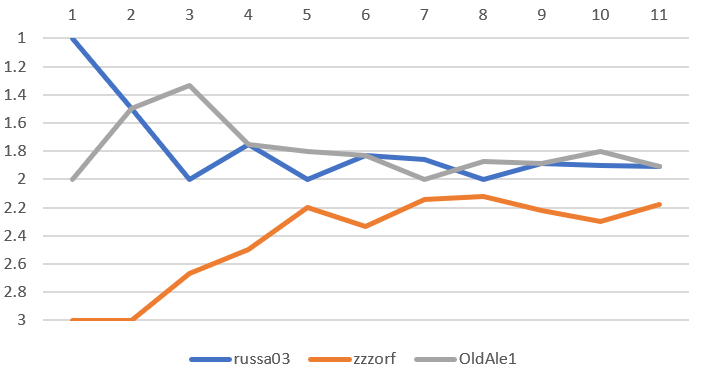 Do I have to see how much I'm losing by, lol

I don't know if it is any consolation to know, but I liked your pick more than two of the Match 1A films. Competition was tougher for me this round.

Do I have to see how much I'm losing by, lol

It's a pity Môjû was in this match as it's the third best (of the 16 i've seen) in the round for me.
Top

Don't be disheartened Zzzorf, Môjû is my highest rated film out of the first two matches so far and a great pick for the tournament. It's been a while since I have seen it but I don't need a rewatch as its the clear winner in my eyes, even though it came up against two solid contenders.

Thanks to all three managers for another close round with an intriguing mix of films, the second and third place decision was particularly tough.
Talking Images Podcast
Letterboxd Blogger ICheckMovies
Top

In the graph it seems zzzorf hasn't got a chance so far, but one vote from filmbantha already makes a lot of difference so it's getting pretty close. 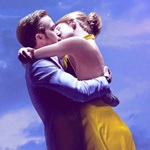 You see.... it's a three way tie now. First tiebreaker doesn't make a difference. Second tiebreaker is a lead for Moju.

Maybe I spoke to soon because with my vote I officially take the lead outright.