Some would say you’re into moms
I saved Latin, what did you ever do ?
Top

Today is Labor Day in the United States. For those of you in other countries that recognize May Day (the First of May) as their Labor Day, you might be a bit puzzled why Sept. 2 is Labor Day in the U.S. It has to do with American fears of creeping socialism associated with May Day, especially after the Second International declared that day International Workers' Day more than a century ago. The irony of course, is that International Workers' Day was chosen for May 1 partially because of a labor massacre that happened in the United States (the Haymarket Massacre). Even more ironically, the Haymarket Massacre happened on May 4, not May 1. It can all get very confusing, especially in the United States, where the hegemonic culture treats work as an almost religious ideal. The way I see it is that International Workers' Day is certainly better, but by living in the U.S. I get two labor days. (Did you know that the Veterans of Foreign Wars declared May 1 "Loyalty Day" in 1947? What a fucking bizarre country!).

Anyway, for the second labor day of the year, I decided to celebrate by watching two labor movies.

4. Cesar Chavez (2014)
In the same way that Chavez himself has become larger in death than he was in life and that his many mistakes and oddities have been forgotten because it's better to consider him a symbol of a movement than a flawed man, I'm tempted to just affirm this movie while ignoring its problems. There aren't enough labor movies. The current labor movement in the United States, along with its entire history, is fading and seems on the verge of disappearing. We need movies like this one, mainstream releases with stars, to remind people what the workers have achieved. All that being said, I thought it was only OK as a labor movie and a biopic. It tells a story of Chavez during his peak 1965-1970 and focuses a lot on him organizing and talking to people. And that's fine, but it doesn't spend as much time dedicated to his interior life or family drama to make that story thread meaningful. And it dedicates barely any attention to the actual conditions of the farm workers, which is the main motive force of this story. In many ways, it's not nearly radical enough.

5. An Injury to One (2002)
On one hand, I'm tempted to wonder where this extraordinary movie has been hidden away all my life. On the other, it's incredible that anyone actually knows about it. This was a thesis movie, made for a master's degree at CalArts. I've never seen a thesis movie before. People rarely see thesis movies. But this one was spectacular enough to get some attention beyond the university. And it's easy to see why. For one thing, it's a fascinating exercise in cinematic formalism, a video essay that features still photos, nearly somnolent film of landscapes, text, music, and a heavy narration to tell the story of Butte, Montana, and its mines and its labor wars. It's a bloody story that is familiar to anyone with any knowledge of American labor history, a story of oppression, corruption, and dashed hopes. The sympathies of the filmmaker, Travis Wilkerson, is not with the incremental trade unionism most remembered in America. He is a radical, and the story of this movie climaxes with the murder by company thugs of an organizer from the International Workers of the World (the IWW, often referred to as the "Wobblies"), who fought for "One Big Union" and nothing less than the eradication of the wage system and capitalism in the United States. The title is taken from a line in the IWW constitution: An injury to one is an injury to all.

3. Sang sattawat (Apichatpong Weerasethakul, 2006) 7/10 ... Easily the best Weerasethakul I've seen. Neither Uncle Boonmee nor Cemetery of Splendour did much for me.
4. First Man (Damien Chazelle, 2018) 6.5/10 ... The moon landing was cool, but otherwise this was unremarkable
Top

One of my favorite centuriesShow
1. Kung Fu Hustle (2004)
2. The Family: Dictators, Murders, & Thieves (2019)
3. The Family: Wolf King (2019)
4. Kathleen Madigan: Gone Madigan (2010)
5. Jim Gaffigan: Quality Time (2019)
6. Tom Papa: Freaked Out (2013)
7. Battle Royale (2000)
Word of warning: don't watch the English dub that's available on Amazon Prime (US). I'm sure that affected my interest, but while I thought was one of the better dystopian teen films (a genre I dislike) and certainly had a lot of cool violence and manipulation, the backstories of the characters just rang a little hollow to me, with too many characters for me to invest in. A solid and enjoyable watch if you want to see teenagers killing each other on an island, but not more than that.

This is the shit I normally watch with my wife. It just happens to count for this challenge. The dancing on SYTYCD is (almost) always great and really interesting to see. Eureka is just a fun silly sci-fi show about ridiculously smart people I envy.
Top 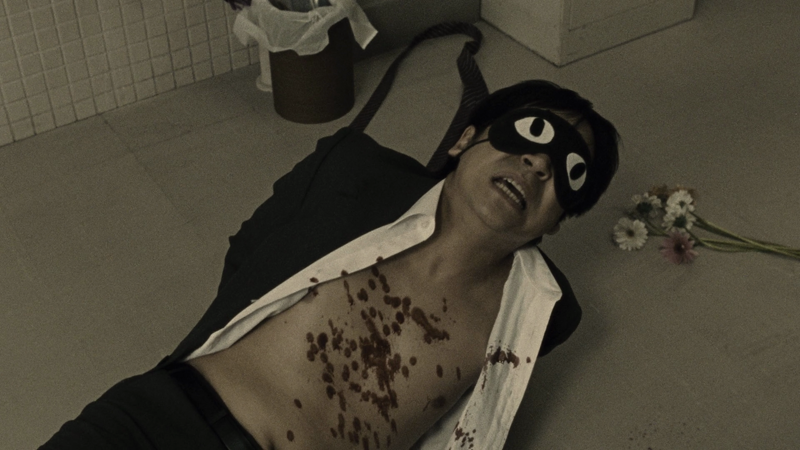 The title here is a play on the R18+ rating classification in countries like Australia and Japan, with the content apparently is so shocking that "no one under 100 will be admitted". The perversities are actually rather tame and hardly graphic. The vast majority of the movie works though with cool ripple special effects, intelligent fourth wall breaking and some commentary on the difficulties of maintaining boundaries and rules in any relationship.
Former IMDb message boards user // iCM | IMDb | Letterboxd | My top 750 films // Long live the new flesh!

6. First Man (2018)
There's something very risky in making a biopic about a famously uninteresting man, and that risk is realized in this movie, which fails to impress in any way aside from its score. The family drama, which the entire movie revolves around, is muted and withdrawn, a pallid nod in the direction of grief and awkward marital dynamics. The movie founders as a result. As for Gosling, well I'm just not sure what to write about him anymore. I saw him way back when he was mostly unknown in an excellent but forgotten drama called The Slaughter Rule, and I said that guy is gonna be a great actor and a star. He's a star now, but not a great actor, his minimalism drawing increasingly diminishing results.

7. Mission: Impossible - Fallout (2018)
I love good action movies and hate bad ones, which is another way of saying I appreciate an action movie that recognizes that decent characters and dialogue are an asset and that good action is about tension, not explosions or pointless movement. So I give credit to this movie for being real in the sense that it is based more around stunt work and wire-work than CGI. And there's an enjoyable gee-whiz sense of speed and wizardry in all the set pieces. But it certainly doesn't have interesting characters or dialogue. And I found myself growing sleepy during the endless Paris chase scene. I'm a bit mystified why this entry in the series received such rapturous acclaim. I found it indistinguishable from its three most immediate predecessors, and indeed before seeing it I had to read summaries of the most recent Mission movies because they're entirely forgettable aside from their centerpiece stunts. The Best Mission Impossible remains the first one, which had, for all its faults, some good dialogue and interesting characters. "Kittridge, you've never seen me very upset."
Top

Lars reveals himself and delves into his own tortured psyche, by using this confession from a serial killer to Virgil... Interesting and humorous, but flawed, as characters seem to only serve this narcissistic purpose...

5. Listen Up Philip (Alex Ross Perry, 2014) 7/10 - Felt like a lesser work from Noah Baumbach (i.e. not The Squid and the Whale) or maybe Wes Anderson
6. Viva (Anna Biller, 2007) 6/10 - This one was strange, and kind of a disappointment in comparison with The Love Witch
7. Jurassic World: Fallen Kingdom (Juan Antonio Bayona, 2018) 6.5/10 - Essentially a retread of the first reboot movie, but enjoyable enough for what it was
Top

10. Our Idiot Brother (2011)
This was the result of a 5-2-1 where Wife picked the 5. And it was so much better than I thought it would be. Some hilarious humor that made my wife really annoyed because I kept laughing really loudly (incidentally, we also had the conversation that I'm annoying when I'm happy and annoying when I'm angry, so apparently, I'm just annoying; and to be fair, she's totally right and I've made that clear from early on in our dating life). Anyway, the film was funny, but had wholesome content and remarkably solid character development. A pretty good movie for when you want to laugh and be happy.
Top

A female take on the buddy cop comedy with an energetic Sandra Bullock and Melissa McCarthy - though neither really flexes their acting muscles as they are typecast here. Several of the jokes go on for way too long too (particularly McCarthy's initial arresting of a pimp) and the up/down love/hate relationship between the pair tires quite quickly. Everything comes together fairly well in the final quarter though; an 'engagement ring' is a highlight.
Former IMDb message boards user // iCM | IMDb | Letterboxd | My top 750 films // Long live the new flesh!

I don't have much to say about these three. They all wavered between bad and OK.
Top

Considering that it is a scene-for-scene remake of Dirty Rotten Scroundrels with near identical dialogue, this is a surprisingly entertaining affair. The gender switching allows the filmmakers here to create a female empowerment story with their victims only being the most shallow and despicable of men. Anne Hathaway also does well channeling Michael Caine's upper class mannerisms. Rebel Wilson is less successful in the Steve Martin part though.
Former IMDb message boards user // iCM | IMDb | Letterboxd | My top 750 films // Long live the new flesh!

1. Once Upon a Time... in Hollywood (2019): 8.2
2. Riaru onigokko [Tag] (2015): 7.2 -In this movie by Sono a highs school student gets stuck in a surreal reality in which violent stuff keeps happening around her all the time. The violence is so grotesque it get a bit mind numbing unfortunately. But it's the reveal at the end that makes this more than a simple exploitation movie. Leave it to Sono turn a movie in which a classroom is gunned down violently by their teacher into a critique on violent masculine society. Although I get the criticism that Sono wants to have and eat his cake too in this movie.
Top

30. Mike Bassett: England Manager (2001) UK 307 checks
Steve Barron's career is strange. From being the ONE director to go to if you wanted a music video in the 80s, to make a streatch of completely forgettable movies. Of course, many have nostalgia with his Teenage MutantNinja Turtles, but after that nothing that shows us that this is the director behinf Take on Me, Money for Nothing, Billie Jean, Africa and Rough Boy.

I really like this movie, but almost nobody has seen it. The survival genre makes for easy drama but as a result tends towards formulaic stories. I think this movie does it right.
Top