Sounds like that can be at the bottom of my priorities for Cage completion..

Bump of this thread reminds me I still haven't seen Color Out of Space, never got a chance at the cinema, bloody pandemic

Noticed it was exactly a year since last rank update, so I've got it up to speed (please let me know if you spot any mistakes). We have officially hit 10 players

And this challenge has been running for over 5 years

The movie: Please note that this movie was originally titled Tokarev and was released as such in Europe. It's a more interesting and appropriate title, but I just assume the producers couldn't resist the opportunity to rhyme Cage with Rage in advertising copy. Anyway, it's an unremarkable revenge thriller. A successful developer with a shady past returns home one evening to learn that his teenage daughter has been kidnapped. Suspecting that someone from his criminal days is responsible, he sets out to find the perpetrator. There is some stylish camerawork, but also some lackluster editing. I have to admit that the ending surprised me and made the trite storyline a little more satisfying.

Cage: Is Cage better when he spend most of the movie in nutzoid mode or when he works up to that state? I tend to think the latter based on movies like this one and The Trust. It's more enjoyable to see the transformation. Plus, there's always the disappointing possibility that he'll spend the entire movie doing his calm thing, so when he actually erupts, it's feels more exciting to see him lose his shit. And yes, Cage definitely lost his shit in this one.

Standout Cage moment: There are two great ones, but I'll put them in spoilers in case anyone wants to see them without being forewarned.
CAGE RAGE!!! 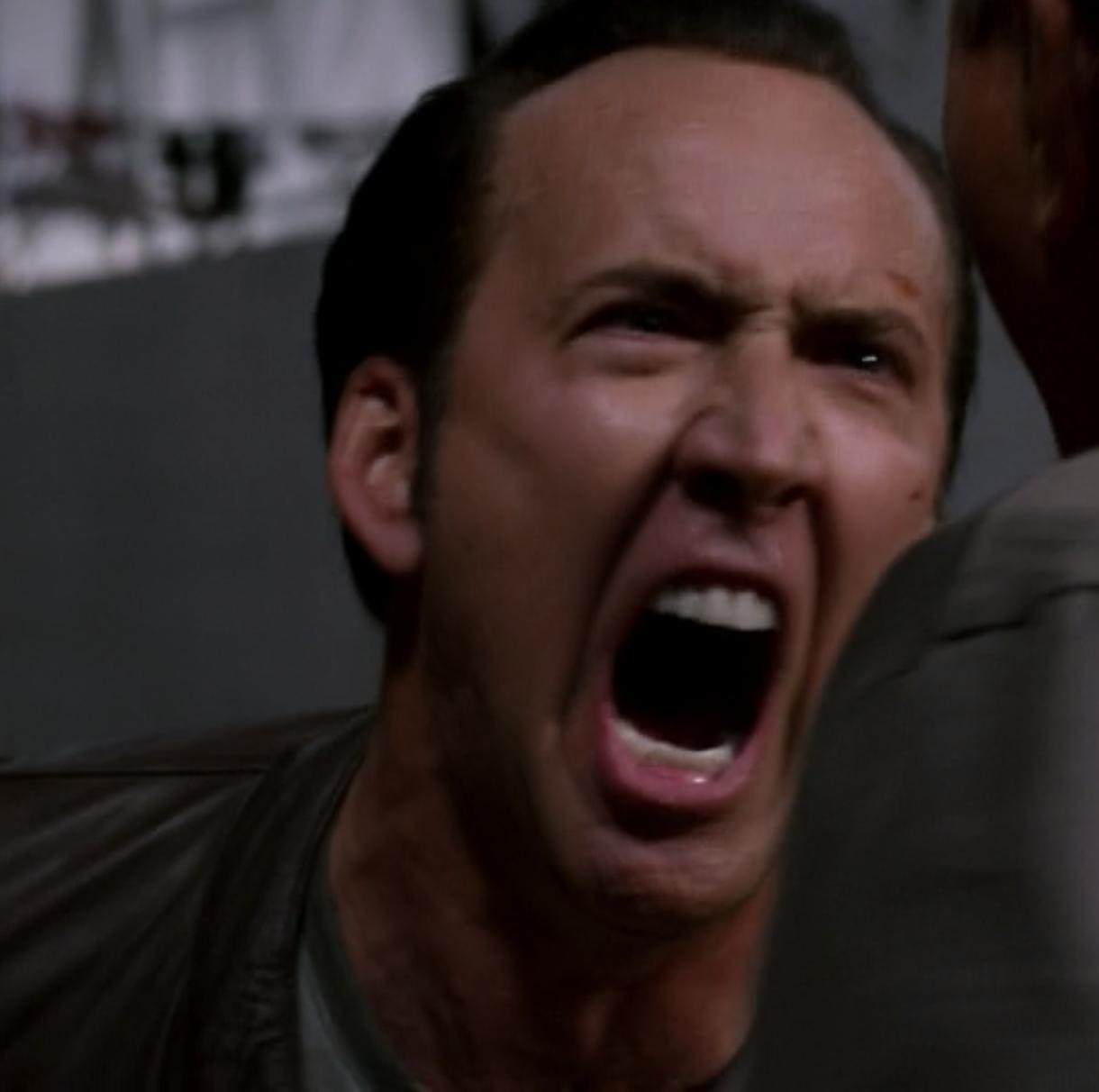 I haven't actually seen Tiger King, but I know my colleagues at work have described it as one of the most fascinating things they've ever seen. On that note, here's something to look forward to:

The movie: Two men walk into a shabby hotel in Bogota. There's a bloody woman upstairs whom they do not see. Instead, Nicolas Cage walks out to greet them as the desk clerk. It soon becomes apparent that they are there to kill him, and he's been expecting them. He willingly surrenders his weapon, but asks if they'll hear a story before they finish him off.

That's the start of Kill Chain, and it's a pretty darn good one. We all know that Nic Cage has made a stupendous number of movies over the past ten years because of his financial problems. And a lot of those movies have been action thrillers. And a lot of those action thrillers, though they may have some memorable moments, have been somewhere between terrible and mediocre. Well, this one is different. This was a genuinely good thriller.

Cage: Restrained, but not doing the typical weary everyman schtick that characterizes most of his restrained roles. Instead, he's laconic and playful. Nutzoid mode is in the overhead compartment, stowed away for the whole movie. And I'm glad. Cage's approach worked for this role.

Standout Cage moment: Not a moment, but a ten-minute scene, which arrives in the second half of the movie, once the story loops around to show us how the movie's opening scene gets resolved. The script is solid here, providing strong dialogue between Cage and the two killers. Cage makes the most of it.
Top

The Movie: An oddity. The Vietnam War is a big part of the plot, but it's not really a war movie. Much of the movie is set in an asylum, but it's not really an asylum movie. Rather, this is a teenage buddy movie, though not a comedic one. It's about a cool kid (with his own problems) who makes friends with an outsider weirdo. That's a common enough narrative trope in movies -- think of Rebel without a Cause or The Mudge Boy (in which birds are also important to the plot). But the movie doesn't begin with these two friends in high school. Rather it begins, with the two reuniting in an asylum after returning from Vietnam, where both have suffered some trauma. The story of their earlier friendship then unfolds in flashbacks. But what really separates this movie is the characteristic that defines the weirdo (played by Matthew Modine) - an interest in birds that slowly grows into obsession and then delusion. There are so many ways this movie could have gone off the rails with such a character. And to be fair, in the final five minutes it does kind of go off the rails. But until that point, Birdy offers a sensitive portrait of the title character as a young man who is simply attuned to the world differently than most people.

Cage: He is the relatively cool friend of Birdy. This is a much different Cage than the one we know from the past decade. This was his sixth movie role, and he was only 20 years old. In some ways, his character is very similar to the one he played that same year in Racing with the Moon (an underrated movie that co-starred a young Sean Penn). He brings the same cool swagger to this role that he brought to that one. The man is a natural performer, after all. What's different is that in the non-flashback scenes in Birdy, Cage's face is swathed in bandages as his character heals from wounds suffered in Vietnam. And given that Modine's character in the asylum is near catatonic, Cage has to carry this entire half of the movie by himself while using only half his face. It's one of his best performances.

Standout Cage Moment: While this is a very good movie, there are some scenes in the asylum when the script becomes leaden. In those scenes, Cage has to deliver what might be called obvious emotions -- the unadorned, overwhelming emotional outbursts that we expect to emerge from moments of great sadness. These scenes are difficult even with a good script. They're near impossible when the script is serving up wooden lines. And Cage nails them all.

Also, check out the two images below. It certainly felt like the Modine/Cage pose was copied from the famous Arlen/Rogers scene in Wings. 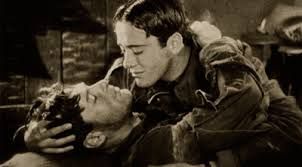 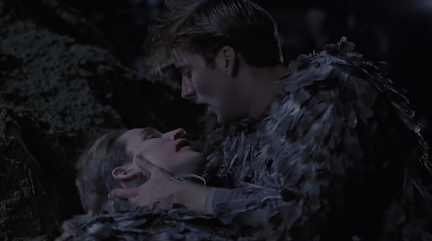 The Movie: A pretty standard thriller, distinguished only by its taboo topic -- snuff films. I have to quibble with the filmmaking: some unnecessary Dutch angles, a score that just doesn't work, and an inability to ratchet up the tension with effective editing.

Cage: Carrying a heavy load here, Cage has to keep the psychology of his character in the foreground of the movie even as its second half focuses heavily on action and confrontation. His role is to make an action thriller into an exploration of a man's descent into an underworld that batters his mind and his conscience. Cage, as usual, is game for this transformation, even if he's a bit restrained. A solid, if unspectacular performance.

Standout Cage Moment: Plenty to choose from. How about Cage screaming, "I'll never get tired of hurting you" at a bleeding James Gandolfini? But I favor the tender scene where he asks the mother of the missing girl whether she really wants to know what happened to her daughter. Cage finds true emotion in that moment.

We also get the transformation below: 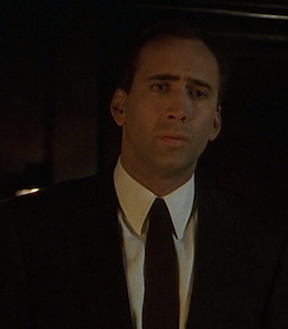 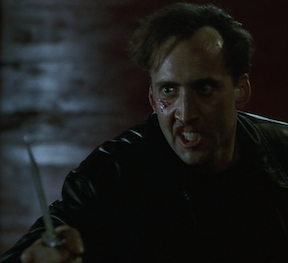 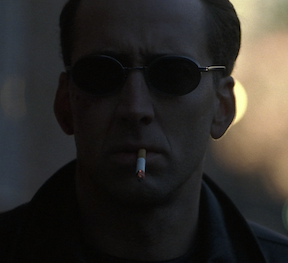 Cage is the only true deity.
Top

Oh wow. These are definitely my people. Thanks for telling me about it.

Image of Cage found in a paint can: 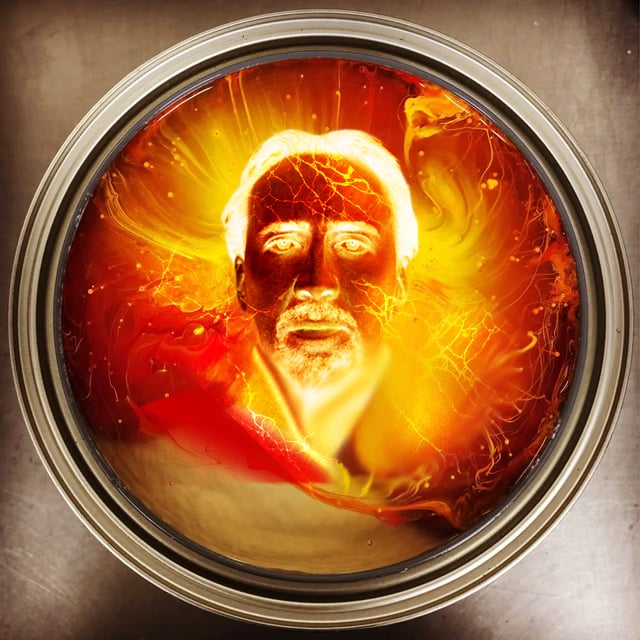 I have not really been participating in the challenge per se, but I did watch Kiss of the Vampire a week or two ago and that was great, and yesterday I watched Dark (2017) which I thought was a pretty good role for him.
Top

The Movie
An unremarkable teen romance, with a few hints of mediocre comedy thrown in. Colleen Camp and Frederic Forrest as the hippie parents simply did not work. There are also subplots that go nowhere, and narrative turns that make no sense.

Cage
"I don't want to go to the valley." That's the second line Cage says in his first starring role. A man after my own heart. Cage is doing his big-eyed sensitive hunk schtick here (see below). It's a mode he hasn't really used since the 1980s because ... well, it's hard to pull off when you're no longer very young. He's very good at it because he's not cookie-cutter. He mixes in enough gonzo energy and random weirdness to make an interesting character. 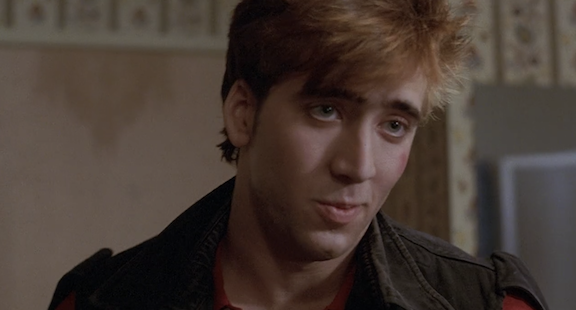 Standout Cage Moment
Cage gets dumped by his girlfriend, which leads to this great rejoinder: "Fuck off, for sure! Like, totally!" 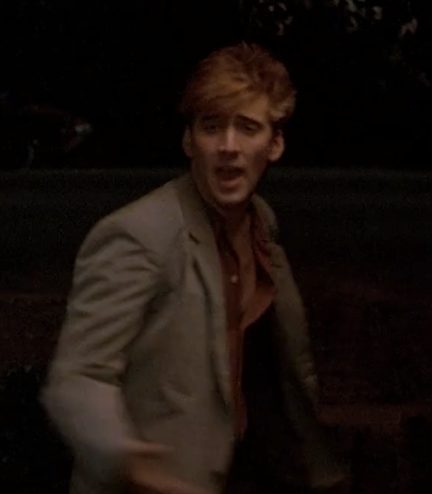 A cringy poker scene, boring Hawaii scenes with Sarah Jessica Parker and plenty of unfunny bits. The story wasn't very convincing either. Nic did okay though.

The rules of this challenge mention only movies, so I'm not counting this toward my total. But it's worth mentioning.

xx. History of Swear Words (episodes 1-2: "Fuck" and "Shit")
When I heard the premise -- Nic Cage stars in a series about cursing -- I was pretty sure I had found my new favorite thing. Unfortunately, the series is only OK. Cage makes for a charming, rascally host, but the episodes I saw focused, unsurprisingly, on the actual topic promised in the title: the history and use of curse words. We get commentary mainly from comedians and some linguists. Cage pops in occasionally. It's all OK but not good enough to keep my interest.
Top

Anything is eligible as per the usual rules for TV etc
Back when this challenge started, he had not yet deigned to dip a toe in TV.
Top
Post Reply
135 posts