Welcome to the ICM Forum. If you have an account but have trouble logging in, or have other questions, see THIS THREAD.
NOTE: Board emails should be working again. Information on forum upgrade and style issues. Podcast: Talking Images (Episode 22 released November 17th * EXCLUSIVE * We Are Mentioned in a Book!!! Interview with Mary Guillermin on Rapture, JG & More) Polls: Directors (Results), 1929 (Results), Directorial Debut Features (Mar 12th), DtC - Nominations (Mar 20th), Favourite Movies (Mar 28th)
Challenges: UK/Ireland, Directed by Women, Waves from around the World
Film of the Week: Lean on Pete, April nominations (Apr 1st)

This is match QFD of the fourth season of iCM Forum's Film World Cup.

List of all topics related to the World Cup including previous seasons
Last edited by joachimt on October 12th, 2020, 11:42 am, edited 1 time in total.
ICM-profile
Fergenaprido: "I find your OCD to be adorable, J"
Top

It's nice to see a comedy paired with a comedy and not a drama.
Actually it was more of a fantasy vs fantasy!
Last edited by Armoreska on October 9th, 2020, 11:03 pm, edited 1 time in total.
he or A. or Armo or any

Nice try, Eesti. But no minor countries are going to the semis this time.
And what a fitting match, these two movies. And also the countries seeing that one got independence from other.
he or A. or Armo or any

Both films start out fine but they dragged as time went on and became less interesting. I enjoyed the music in the Russian film.
Top

Thanks to both managers for taking a punt on comedies! Neither film really made a great impression on me though sadly and this makes me wonder if much of the humour was lost in translation or if it could even be down to a lack of cultural awareness on my part. I agree with Cocoa that the music in the Russian film was enjoyable and might even be what gives it the slight edge in this head to head.

filmbantha wrote: ↑October 2nd, 2020, 2:15 pm makes me wonder if much of the humour was lost in translation

You can be sure of that with russian movies, especially comedies. I just clicked in a random spot and immediately noticed a loss of some meaning in the sub. You can add a point for that, but I don't remember how much it affects the movie. I can understand the plot is not for everyone.
he or A. or Armo or any

Pretty weak match. Meeletu was okay. I had some mild fun with it. The Russian movie seemed like more fun at first glance, but I didn't get into the story at all and the songs annoyed me. I liked the set design though.
ICM-profile
Fergenaprido: "I find your OCD to be adorable, J"
Top

kinda agree with Joachimt, somewhat milder in my rating, but the Russian one really was annoying actually... I do love skazka, but this was just not my thing
Top

Weak round. I appreciate the managers' attempt to bring some fun, though.
Top 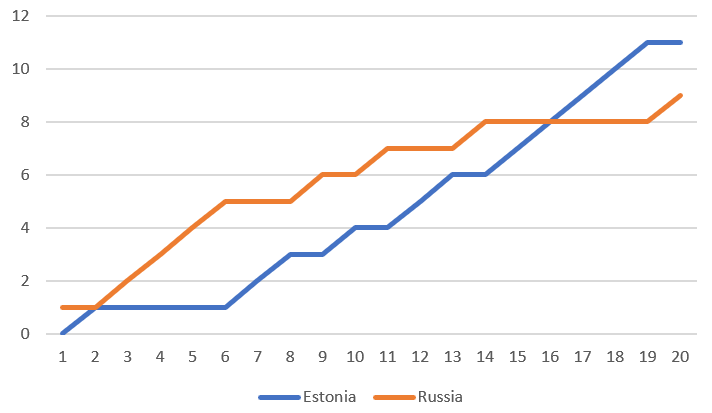 Funny to see both of them are TV Movies.
Top

I echo Angel's sentiments about the selections this round. I can't really decide which one I like better... or rather which one I don't dislike more. Neither film was bad, but neither stood out for me either. And for comedies, both films were surprisingly slow and somewhat drab.

The exposition at the start of Mindless was cringey, and I thought the film was going in a totally different direction. But things got better once he moved to the country house. It was good and mellow for a while, but then it got old with the revolving door of visitors. The film had an interesting premise, but it never really went anywhere, and the conclusion at the end was not satisfying at all.

An Ordinary Miracle is like the poster boy for Soviet films, it was just so... Soviet. It was long, even when breaking it up into two parts. Unlike other Russian comedies from that era that I've seen, this one didn't hold up as well, nor was it as funny, and I wonder how much of its high rating is due to actual enjoyment, and how much is due to nostalgia. I'm also curious how the same story was told a decade or so earlier with a much shorter running time (almost an hour less). Everyone in the ensemble did their part, and it was generally pleasant overall, but it didn't really capture my interest or constantly hold my attention. I do find it interesting in that it's a fantasy film without any fantastical things taking place on screen (the few bits of magic the magician claims to have done are all off screen). I'm not sure what to make of the songs either. The whole thing was just rather absurd.

I'll give the edge to Russia since their film was more memorable, though both are only about 6.5s

And I believe that brings it back to a tie if I've counted correctly.
Top

Deadline is over. There's a three day extension.

Extension countdown
ICM-profile
Fergenaprido: "I find your OCD to be adorable, J"
Top

Only 22 votes so far. Lowest number before was 24. All people with perfect participation have voted. Users with at least 50% participation who haven't voted this match so far:
burneyfan
sacmersault
kingink
pitchorneirda
Traveller

There are 21 users with perfect participation. Gorro is the only voter this match without 100% participation.
ICM-profile
Fergenaprido: "I find your OCD to be adorable, J"
Top

joachimt wrote: ↑October 12th, 2020, 11:45 am Only 22 votes so far. Lowest number before was 24. All people with perfect participation have voted. Users with at least 50% participation who haven't voted this match so far:
burneyfan
sacmersault
kingink
pitchorneirda
Traveller

I guess people on this forum really don't like comedy.
Top

Let's ask them, provided they read.
How come, you haven't watched the movies this round...Burneyfan, Sacmersault, Kingink, Pitchorneirda, Traveller.
he or A. or Armo or any

The obvious solution is that we do a tournament of arm wrestling matches to decide the winner between the two groups.
Top

I propose we count the number of russians and estonians, or those who speak the language, among those who voted and determine the winner that way

60% problem of availability, I couldn't download the Russian movie in time
20% the movies didn't really appeal to me that's true, at least not enough to make a huge effort to get them
20% lack of time to spare, hectic schedule at work these past few weeks
"Art is like a fire, it is born from the very thing it burns" - Jean-Luc Godard
Top

So can you make it in 2.5 days, pitch?
ICM-profile
Fergenaprido: "I find your OCD to be adorable, J"
Top
Post Reply
72 posts