This is match 2E of the fourth season of iCM Forum's Film World Cup. Close one, but I still think Corn Island is clearly the lesser of the two because of its contrived symbolic ending. Can also be a bias from me because the writer is this Dutch guy and I don't trust my fellow countrymen to be able to create a work with an authentic Eastern European heart... must be a "product" made for western festival audiences right? At least that is how I felt a bit when I saw this movie in theaters, followed by a q&a with Roelof Jan Minneboo... but like I said, I'm also aware that bias clearly plays a bit of a role there...
Top

Georgia got luck of the draw. But whoever gets Georgia next will have the luck of the QFs.

Tengiz Abuladze and Otar Iosseliani laugh at this.
Top

I rated Corn Island 9/10. Doesn't feel like luck to me. It would have won any match this round if it's up to me.
ICM-profile
Fergenaprido: "I find your OCD to be adorable, J"
Top

Tengiz Abuladze and Otar Iosseliani laugh at this.

I agree.
Georgia still has a lot to offer.
And I don't think the manager has picked the best ones.
Top

I'm interested in the cinematographer of Dorogoy tsenoy because somehow it reminds me of Parajanov's Shadows of Forgotten Ancestors.
Top

Tengiz Abuladze and Otar Iosseliani laugh at this.

Both films are bland. The Horse That Cried was a bigger mess of a film while Corn Island was more coherent, so Corn Island gets first even though I'm disappointed by the small amount of corn in the film. I was expecting more corn

I've seen more cornstalk next to the side of the road in my hometown.
Top

Both films are bland. The Horse That Cried was a bigger mess of a film while Corn Island was more coherent, so Corn Island gets first even though I'm disappointed by the small amount of corn in the film. I was expecting more corn

I've seen more cornstalk next to the side of the road in my hometown.

The Horse That Cried is a masterpiece, deep, lyrical and beautifully shot. Can't believe it's losing the match.
Top

Given all the 'eh' feedback that Georgia's entry is getting, I wonder how Landmine Goes Click would have fared in the World Cup. That's my own choice for the best Georgian film that I have seen; far more psychological thriller than outright horror if anybody is wondering.
Former IMDb message boards user // iCM | IMDb | Letterboxd | My top 750 films // Long live the new flesh!

The Horse That Cried is a masterpiece, deep, lyrical and beautifully shot. Can't believe it's losing the match.

I can't believe that Angel's team avanced to round 2.

I rated Corn Island 9/10. Doesn't feel like luck to me. It would have won any match this round if it's up to me.

I agree with this. I had seen Corn Island and rated it 9, which I rarely do. I think it's one of the best films from the 2010s. I really liked the Ukrainian entry, but it was going to be really hard to be Corn Island.

1. Simindis kundzuli 8/10
2. Dorogoy tsenoy 7/10 Too bad... Until the 50th minute of the film I loved it and thought it could take the win from Corn Island. But then it just lost me. I think it went from a folklorish fairytale with beautiful cinematography to a chaotic melodrama. My mind was starting to drift away... Was it my fault or others felt the same way? But I am really a sucker for this kind of cinematography so I gave it a 7.
Top

The Horse That Cried didn't connect with me at all. I know it's based on a book/folklore, but it came across as a story of sympathetic yet stupid people making stupid decisions with little to redeem them. And yeah, that shift in tone/focus halfway through was weird. It definitely suffers from a poor print and poor subtitles, but I'm not sure if a restoration would improve my opinion on this. 6/10, leaning toward a 5 on this.

Corn Island had an unfair advantage in that it's stunningly beautiful to look at, and it's really an unfair comparison of modern technology versus older tech. Admittedly, I have a hard time distinguishing between "pretty" cinematography and "technically competent" cinematography, but I adored the setting and the way it was filmed. The story was good too, and I consider this to be slow cinema, which I don't normally go for, but I was engaged the whole time. I'm not totally in love with the ending, but everything else leading up to it was so good, and I'm really interested now in finding out how this film was made. I'm finally coming around to Georgian cinema, and I want more. 8/10.

spoilery thoughts about Corn IslandShow
In Corn Island, what was the significance of the item the grandfather found at the beginning? Was it just confirmation that someone had been there the year before, similar to the next guy finding the doll at the end? What even was that object?

I also loved that you go into this thinking it's a Georgian film, and then there's no dialogue for 20 minutes until the first words are exchanged between the two leads, and it's in Abkhaz, throwing asunder all your previous thoughts on the film. I wonder if it it was filmed on the actual river where the current border/line of control is. The old man is actually Turkish, and the young girl is Georgian I think, which kind of explains why so little is spoken because they probably wouldn't sound like native speakers if they spoke too much. I wonder if the other Abkhaz characters in the film were played by native speakers or not (I kind of think not given the situation there).

And I liked the motif (if that's the right word?) of (un)known danger and terror being just around the corner. It gave a sinister twist to the Pocahontas song "Just around the river bend"

Deadline is over. Final score:

Georgia wins. Congratulations to zzzorf. Also thanks to Angel Glez for his pick and to the 26 people who voted this match. 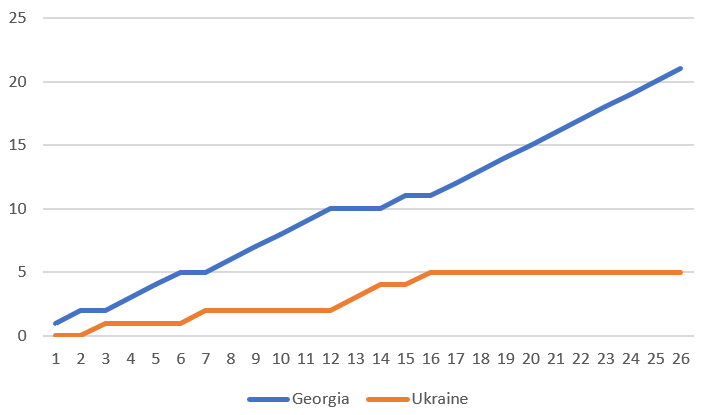 I'm the only one here to have watched it without, and my rating is still the lowest.