This is match 2C of the fourth season of iCM Forum's Film World Cup.

Already seen both movies lots of years ago.

To proxenio tis Annas: 3
ICM-profile
Fergenaprido: "I find your OCD to be adorable, J"
Top

Oh it will probably be a close call!
Top

WDYM? He voted indep-ly of you!

WDYM? He voted indep-ly of you!

Greece taking a clear lead at the moment.

Touki Bouki: 5
ICM-profile
Fergenaprido: "I find your OCD to be adorable, J"
Top

Sorry for Senegal, but the endless repetition of Josephine Baker's "Paris, Paris, Paris" really got on my nerves after some time
"Art is like a fire, it is born from the very thing it burns" - Jean-Luc Godard
Top

Very close one for me, but "Anna's Engagement" is more memorable.
Top

What is it with this season and N-H animal cruelty?
he or A. or Armo or any

You know, I'm allergic to Godard or any kind of Godardesque cinema.

Touki Bouki: 6
ICM-profile
Fergenaprido: "I find your OCD to be adorable, J"
Top

This was a close one as I didn't find either film to be particularly stimulating; that's not to say they are bad films, they just didn't do much for me

I saw Touki Bouki last year when I was contemplating films for the first round. I found it a serviceable drama that had great cinematography. Despite it touching upon some themes I wasn't expecting from 1970s Africa, overall it didn't hit me quite as hard as it could have. It could be a film that improves upon rewatch, but wasn't necessary right now.

I saw To proxenio tis Annas the other night, and I alternated between confused and bored. I read a summary of the film afterward, and my understanding of the course of events was rather different than the summary. I guess this one was just not for me. Some of the subtitles seemed odd to me (or missing, but I think it was mostly non-essential stuff like the radio and singing and group chatter), but I know how hard it is to translate so thanks to kingink and joachim for making them so that we could see this film.

A comeback for Senegal seems almost insurmountable at this point, so thanks y'all for playing, and congratulations Burneyfan

Match is over. Greece wins. 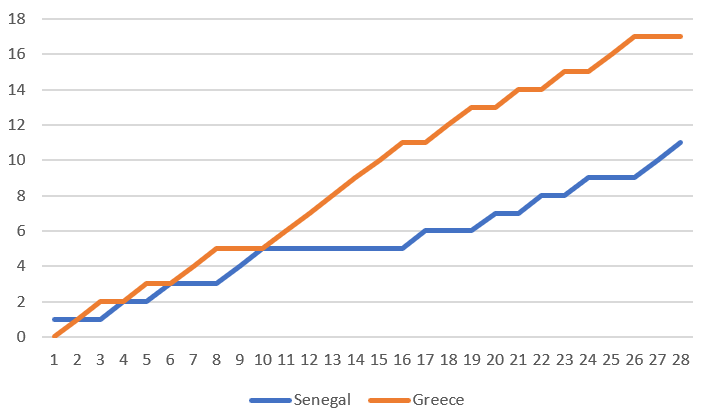 Congratulations to burneyfan. Also thanks to Fergenaprido for his pick and to the 28 people who voted this match.
ICM-profile
Fergenaprido: "I find your OCD to be adorable, J"
Top
Post Reply
38 posts • Page 1 of 1