This is match 2B of the fourth season of iCM Forum's Film World Cup.

I'm starting this match one day early, because I won't be home tomorrow.
ICM-profile
Fergenaprido: "I find your OCD to be adorable, J"
Top

Enjoyed both movies. Thanks for the picks!
My iCM
Top

Funny that both films features a more introverted character forced to commit crimes by a thug. I'm giving Bihisht the edge because I preferred how the subject was treated.
Top

1. Dogman 7-
2. Bihisht faqat baroi murdagon 5
"Art is like a fire, it is born from the very thing it burns" - Jean-Luc Godard
Top

Dogman's character was much more memorable and there was more development. Things went down in a spiral, which was much more interesting in the end than that one thing going up in the other movie.
ICM-profile
Fergenaprido: "I find your OCD to be adorable, J"
Top

Another meh match for me

I feel like Bihisht faqat baroi murdagon ends too early and could have been better if they'd just added another event at the end, but Dogman is boring so I'll rank Dogman last.
Top

I found myself unable to connect with Bihisht. There were many reactions from the characters in the film that made no sence to me at all. Dogman on the other hand had a more solid story and characters that were built in a more coherent way.
Top

That's correct, but I have to be online for the match to start. I just posted it.
ICM-profile
Fergenaprido: "I find your OCD to be adorable, J"
Top

Thank you for both films!
Top

Well at least it is easy to copy paste my vote...

close one, both not entirely my thing but well made, with Dogman being slightly more ambitious, so winning this for me
Top

I enjoyed both of these films, thanks to the managers for their picks.

I had access to both of these films, but I unexpectedly had plans today, so I didn't get around to either of them. I apologize. I'll participate in the next round for sure.

I feel similar to beavis on these two; both good films, but I didn't particularly enjoy either one. Both 7-7.5ish/10 for me.

Dogman bothered me because of the violence (I don't think I'll ever be acclimatized to it), but it was solid overall and mostly believable. I had some trouble believing some of the actions of the main character, but perhaps that's because he is so foreign to me and I have a hard time ever seeing myself in a similar situation, so I can't really say what I would do. I've been intrigued by the director's Gomorrah for years, but now I'm thinking it might not be the film for me if it's anything like this film.

Bihisht bothered me because of the creepy way the lead followed around women (and no, the irony of this is not lost on me considering this film competes against Italy). It seems like the director tried to paint him as naive and sincere, in that he doesn't just lurk around but approaches the women and states point blank what he's looking for, but it didn't make it any less creepy and it went on for far too long. I was also surprised that the film opened with some full frontal male nudity; was not expecting this from a Central Asian film, considering how conservative that region is. And I thought it covered the interplay/switching between Tajik & Russian quite well, which added another dimension to the film.

Bihisht was easier to watch, but I think Dogman held my interest more (between the parts I had to pause/cover the screen when it got too violent for me).

It's fairly even for me, but I think my vote goes to Italy this time. Ask me again tomorrow and maybe I'll change my mind.

Thanks to both managers.
Top

Ten votes in a row for Dogman.
ICM-profile
Fergenaprido: "I find your OCD to be adorable, J"
Top

Deadline is over. Final score:

Italy wins. Congratulations to hurluberlu. Also thanks to clemmetarey for his pick and to the 26 people who voted this match. 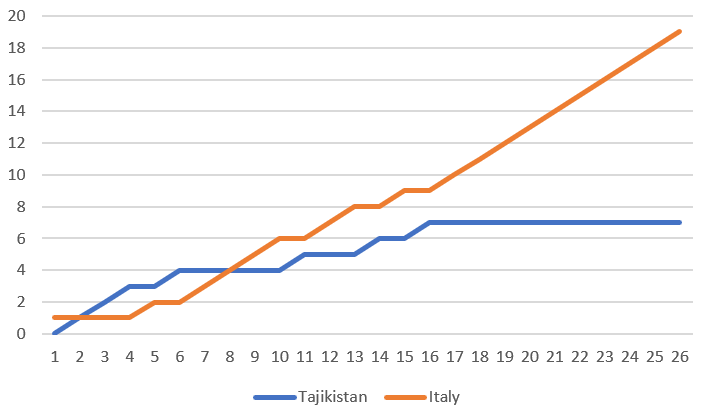 This surge is one in a lifetime
he or A. or Armo or any

Yeah I had hope at first but the ending was devastating at look at.

At least it seems like no one strongly disliked my pick.

I had fun exploring this country, I might do something similar for next edition.
Top
Post Reply
38 posts • Page 1 of 1