Welcome to the ICM Forum. If you have an account but have trouble logging in, or have other questions, see THIS THREAD. Podcast: Talking Images (Episode 3 released May 19th) Polls: South Asia (Results), Doubling the Canon (Results), 1950s (May 24th), 1966 awards (May 28th), 1935 (May 29th)
Challenges: Comedy, Western, Iberian Peninsula
Film of the Week: Unter den Brücken, June nominations (May 29th)
World Cup S4: Round 2 schedule, Match 2A (Jun 4th)

I liked the Swedish and Chinese entries, and in another group they'd have probably gone higher, but they were pitted against one of my very top favorites and another solid favorite. Thanks to wasabi, Ritesh, Peaceful, and Lilarcor!
Top

1. Mahanagar - This was an outstanding film. I have only had one taste of Satyajit Ray's work before, that being Charaluta, and that was early on in my start of adventure into cinemas vast history so it didn't necessarily work that well for me. This one was well constructed and the story flowed perfectly and kept me interested all the way to the end. I look forward to venturing more into Ray's work, including going back to give Charaluta a second chance. 8/10

2. Mi tío Jacinto - This was a pretty enjoyable little film. The relationship between uncle and nephew was well established and you could really get a feel for what they had to do to survive each day. While a lot of this film was done well, including the score and cinematography, it was the young actor playing Pepote that stole the movie. 7/10

3. Midvinterblot - This short was really well done, a great piece of cinematography but unfortunately it wasn't really that great for me as a movie as such. I had no problem with the story but for such a short run time I need to be really captivated for it to work well for me. 5/10

4. Tian shu qi tan - Yeah this movie was just not for me. I am not really a fan of the animation style and I just couldn't get into the story at all. 2/10
Top

I won't bother posting the graph until the end. It's a boring graph.
ICM-profile
Fergenaprido: "I find your OCD to be adorable, J"
Top

And no Joachim... I am not copying you

And no Joachim... I am not copying you

It's nice to know our tastes are still alike after all those years.

I enjoyed all four of these films but Mahanagar is a firm favourite of mine and I don't think there are many films that would have stood a chance against it. Thanks to all 4 managers for their picks

Unfortunately, I don't think I'm going to make the cutoff this time, but I'll try. I waited too long.

Edit: Yeah, I had a long day, so I'm going to go ahead and call it a night. Damn chronic fatigue. I did get to see two of the films, the Chinese and Swedish entries, and unfortunately, I didn't like either of them. I don't want to make the person who picked the Chinese film feel bad, and I'm very glad that plenty of other people liked it, but I found absolutely nothing to enjoy. It was a painful experience. The Swedish short was at least pretty to look at, but I didn't respond to it. It's too late to get in a vote, but I'll watch the other two films tomorrow. I have high hopes for my first Satyajit Ray film.

1. Mahanagar - 8.0 - Great film, one of Ray's better films of the ones I've seen so far.
2. Mi tío Jacinto - 7ish - I started out disliking the film, then liking it, then disliking it again. I kept bouncing back and forth. Similarly, the story was all over the place, but the kid actor was adorable and did quite well for one so young. Side note: Does anyone know why the English title is "Uncle Hyacynth" instead of "Uncle Hyacinth"? Is it a transcription error on imdb/wikipedia? tmdb lists it correctly as Hyacinth (which is the proper spelling of both the name and the flower in English). I cannot locate any English-language poster of the film, and even the Berlinale listing has the Spanish title. Is it subtlely suggesting that Jacinto is gay (and perhaps why he lost his job)? https://www.urbandictionary.com/define. ... m=Hyacynth
3. Midvinterblot - 7.2 - decent short, but nothing outstanding. I might actually rate it slightly higher than Jacinto, but it's discounted by being a short and connecting with me less than Jacinto.
4. Tian shu qi tan - 3-6ish? - I have no idea how I feel about this film, whether it's a dislike or not, but it's definitely the lowest of the bunch. I liked the animation, and the source story/legend sounds interesting, but it was just all so.... stupid? I can't tell if the dialogue was that stilted, or if the English translation was just a truly horrible mess, but it was easily the worst part of the film and seemed like it was dumbed down for little kids even more than most American cartoons. Second worst was the fool. Unrelated, I didn't realize the black fox was a woman until halfway through when one of the characters mentioned it. I think this is truly a cultural phenomenon that doesn't really work outside of that culture.
Top

That's a lot!! Considering there are 24 ways to order 4 movies, this amount of agreement is astonishing.
ICM-profile
Fergenaprido: "I find your OCD to be adorable, J"
Top

The match is over.

India and Spain proceed to the next round. Congratulations to Ritesh and PeacefulAnarchy. Also thanks to wasabi and Lilarcor for their picks and to the 28 participants who voted in the match.
Top

I've updated the all-time tables, but I need "participation by user" data from Joachim to complete it all.
Top

The match is over.

India and Spain proceed to the next round. Congratulations to Ritesh and PeacefulAnarchy. Also thanks to wasabi and Lilarcor for their picks and to the 28 participants who voted in the match. 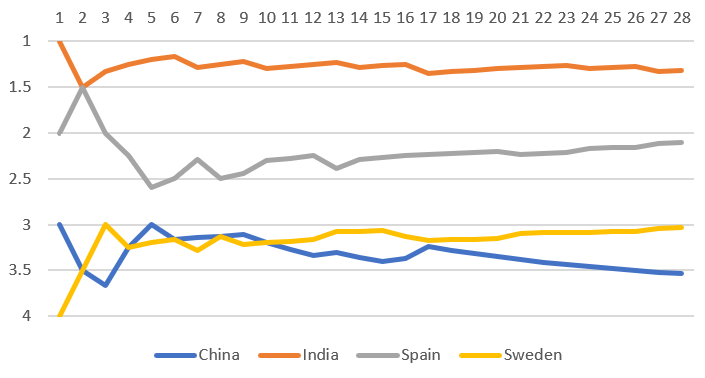 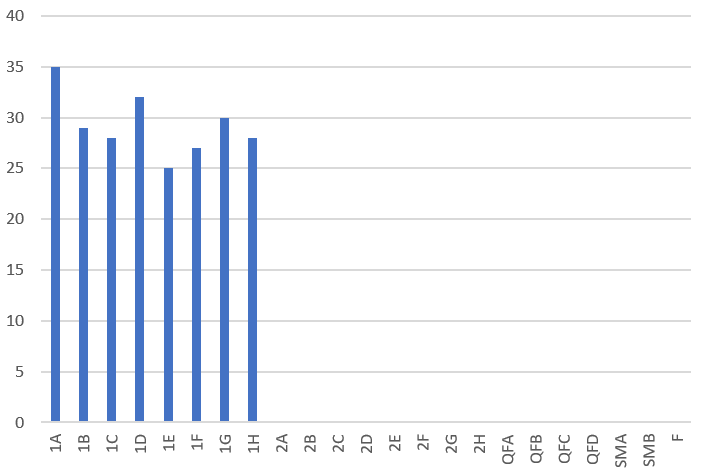 Thanks J. Boring graph, but fascinating in its boringness. And participation stayed pretty consistent this round, which is nice.

And didn't kongs_speech make it for a couple of matches? I don't see him in your list of pariticipants.
Top

234 votes judging by that graph

By searching the posts, I've found these:

I found the flaw. The ones with 8/8 were correct.