Unfortunately this was a very bad round for me, not really enjoying anything. The winner for me though is easily the better with the other 3 exchangeable.

Indeed. It's not a question anymore which countries proceed, just a question which will end up first. 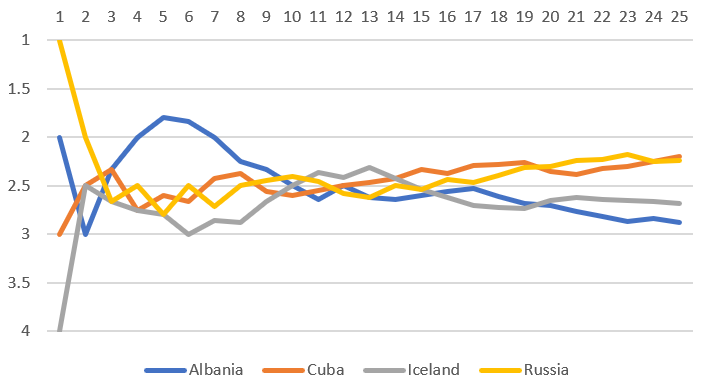 1. Days of eclipse - Second Soukurov film after kamen that I had to watch it twice before I understand what was fgoing on. this was teh firs tfilm I watched rom this group. Didnt think it would end up as winner.
2. Madagascar - Nice little film but too little that I couldnt get conencted to the mother or daughter. One of the scene reminded me of Inception.
3. Angels of the Universe - Fine.
4. Composition - Nothing wrong but Forgettable short.
Top

Not a particularly enjoyable round, I'm sorry to say. But, for the msot part these were bold choices, so I commend the managers for taking risks.

I started off with the short, which was inoffensive yet forgettable and felt like a throwaway selection, to be honest, even thought it (surprisingly) made my top two. Albania's not a big film country by any means, but it's had some interesting stories over the years and I was looking forward to discovering one of them this round.

Next up was the sepia film; this was my third Sokurov film, and probably my third dislike... I'll find a Sokurov film I'll enjoy one day. It might have been better if it hadn't been so long, as it did have some enjoyable moments, and I think positioning it as a scifi film gives people the wrong expectations. The book it's based on may be scifi, but nothing about the film really felt it. Weird and disconcerting at times, and confusing? Absolutely. But not really scifi-ish. The eye candy of the "casual athleticism" of the lead wasn't enough to keep me interested, though I find it strange that the director has downplayed/criticized the idea of homoeroticism in another one of his films when it's so clearly on display here. Still, it's the best Sokurov I've seen so far.

Angels started off so confusing that I had to pause it to go read a synopsis... then I discovered it was that Icelandic film (and probably the only one of this round I would have sought out myself). It got a bit better over time, but the rapid time jumps didn't allow any of the issues to carry any weight. Despite a few good scenes/lines, it felt overly maudlin. The opening scene with the mother of the girl was cringeworthy. And how old was the lead supposed to be? I have hard time believing that the two kids were his siblings when the actor was 36 and the character was at least 21 (says he was born when Iceland joined NATO, which was 1949, and at one point they mention the Beatles were no longer together, which happened in 1970, though it's unclear for how long that was, and I don't remember when in the movie they said that... plus I couldn't figure out which era the film was supposed to be set in).

Madagascar was mercifully short. No depth, no story, no explanation of why they're moving every five minutes, no character development, no... anything. Inspired by a book it seems, and kind of felt like a bad poem. Also, the lead actress definitely went to the Ross Matthews School of Overacting. No subtlely there.

Sadly, the subtitles for the three features were all shoddy; I even paused the Icelandic one to see if I could find better ones out there, to no avail. And the Cuban one failed to translate a number of lines, so those that don't understand Spanish were possibly confused, though I suppose most of the dialgue was unimportant anyway.
Top 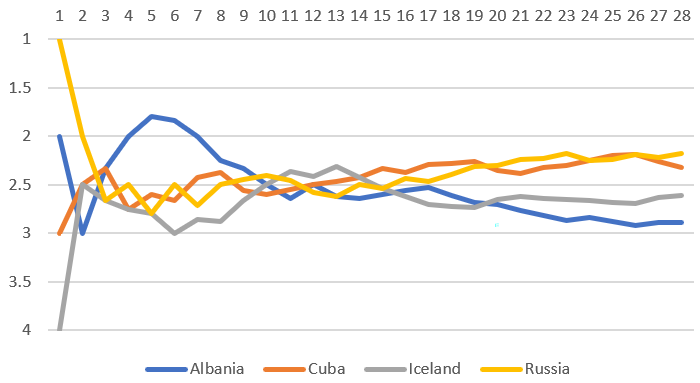 Half a day left. I won't be online at the deadline and probably won't be for the rest of the day tomorrow. But Mario will certainly post the final results.
ICM-profile
Fergenaprido: "I find your OCD to be adorable, J"
Top

Russia and Cuba proceed to the next round. Congratulations to Gorro and sacmersault. Also thanks to Asberg and RogerTheMovieManiac88 for their picks and to the 28 people who voted this match.
Top