I'm delighted to see that you're finally working on my list of favorite unofficial movies. I watched this movie almost five years ago, but remember it well enough to leave a comment.

My home page hasn’t been — or barely been — loading for a week or two now. And my ranking hasn’t been updated in the meantime either.

My ranking has, correctly, improved twice during the last week. Although I remember times were nothing was updated.
Top

It's currently impossible to a check a film. Current version, Beta, from director lists or on the actual film page, it's all dead. Can somebody ping me when it is fixed?
Former IMDb message boards user // iCM | IMDb | Letterboxd | My top 750 films // Long live the new flesh!

Ah, the west coast NA 8 o'clock curse! Although I managed to get a check in during the first five minutes and even a dislike to boot!

I know I didn't have trouble at this time a couple nights ago, so I'm thinking some sort of process is set to run at this time, but not every day. 8 days and not response on the official forum either.
Top

Yeah, I just saw your post on the other forum. At least it's not just me. 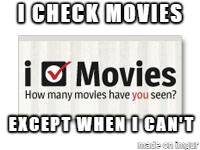 OK, it's working again now. Says that my last check was 26 minutes ago, which means that one of the twelve or thirteen times I clicked the button it must have gone through.

Weird stat: I just looked at my checking history, and ICM is wrongly saying EXACTLY 1,200 of my checks are on zero lists. I don't know what the proper tally should be.

Glitch still not fixed. Unofficial lists not being tallied for many, many films.
Top

sol wrote: ↑February 20th, 2021, 4:51 am OK, it's working again now. Says that my last check was 26 minutes ago, which means that one of the twelve or thirteen times I clicked the button it must have gone through.

yeah - that's what happened the last time for me as well

still no response on the official forum

Nothing seems to be going through at the moment for me. Checking is running forever. Tried to update a list, but it keeps thinking...
ICM-profile
Fergenaprido: "I find your OCD to be adorable, J"
Top

So I've had the Hour of Molasses two nights in a row - still at the same time. Last night I just let the little reel spin round and round and did something else. When I came back, the check had taken. I've probably been waiting for close to two minutes now, but no luck yet. My guess is it will eventually process. No luck, finally timed out or something to that effect. More than kind of annoying.

edit: I got busy with something else. Seems the check took 22 minutes ago but the check didn't return on the page - had to go to checked movies to find out.
Top

Progress page hasn't been updated in ages either (again).