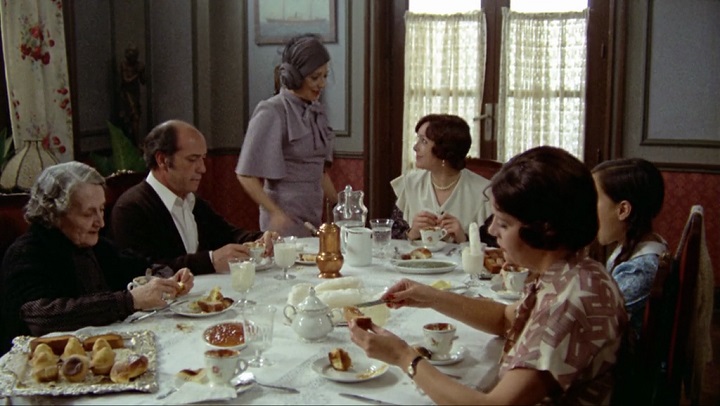 Summary:
When the single middle-aged Luis travels from Barcelona to bury the remains of his mother in the vault of his family in Segovia, he is lodged by his aunt Pilar in her old house where he spent his summer of 1936 with her. He meets his cousin Angelica, who was his first love, living on the first floor with her husband and daughter, and he recalls his childhood in times of the Spanish Civil War entwined with the present.

Finally watched last night. Overall, like most of Saura's work, a good, interesting film. It takes a few minutes to get one's footing as to what's going on re: the main character, but once I was up-to-speed I found it interesting and thoughtful.
Design works well, pacing flagged a bit midway (where's this going?), but then wrapped up in good order. Mostly the acting was decent though there were times when both López Vázquez and Canalejas just didn't seem to get it quite right (when they were representing their other selves) - it just felt overdone.
I rounded up to an 8/10 since the overall concept was good, interesting, and thought-provoking but can also see why some might not be moved by the way the story is told. It was different, and that's good in my book. Also, since it was made in the waning days of the caudillaje, it was clear Saura had to be careful what he said about the war.
Top
Post Reply
3 posts • Page 1 of 1