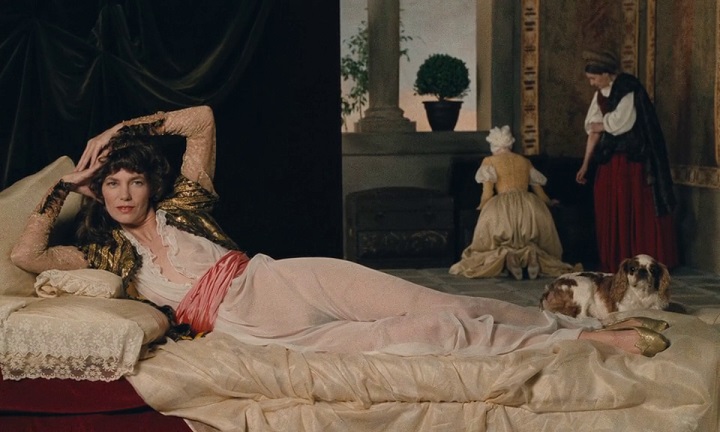 Summary:
"I'll look at you, but not at the camera. It could be a trap," whispers Jane Birkin shyly into Agnès Varda's ear at the start of JANE B. PAR AGNES V. The director of CLEO FROM 5 TO 7 and VAGABOND once again paints a portrait of a woman, this time in a marvelously Expressionistic way. "It's like an imaginary bio-pic," says Varda. Jane, of course, is the famed singer ("Je t'aime ... Moi non plus"), actress (BLOW UP), fashion icon (the Hermes Birkin bag) and longtime muse to Serge Gainsbourg. As Varda implies, JANE B. PAR AGNÈS V. abandons the traditional bio-pic format, favoring instead a freewheeling mix of gorgeous and unexpected fantasy sequences. In each, Jane inhabits a new character, playing a cat & mouse game with Varda as they explore the role of the Muse and the Artist, all the while showcasing the multifaceted nature of Birkin's talent. "I'd like to be filmed as if I were transparent, anonymous, like everyone else," says Birkin. But her wish to be a "famous nobody" is impossible to achieve; Birkin is simply too magnificent, too mesmerizing. Here, Varda's signature mix of aesthetic innovation and generosity of emotion results in a surreal and captivating essay on Art, Fame, Love, Children and Staircases.


This movie fits the current Directed by Women Challenge.

One of my favorite Vardas. I believe I nom'd it for dtc last year or year previous. Like most of Varda's best docs it somehow feels very grounded and almost lo-fi in approach, yet still radiates an above-the-clouds ethereal, fantastical quality.
Top

I enjoyed this film. I always love Agnès Varda appearing in front of the camera

The Laurel and Hardy sketch

I loved the loading room being viewed from above in an effort to portray it as a maze.
Top

Just watch it a bit too late for the week. Anyway, I don't really know what to do with this one. 6/10
ICM-profile
Fergenaprido: "I find your OCD to be adorable, J"
Top

I watched this in a French archive in 2012 before it was available in the USA. Then by 2015, English subs were made and it was shown at a theater in Los Angeles with Agnes Varda in attendance. Really, loving both Varda and Jane Birkin, this movie is imaginative and fun. I hope everyone enjoyed. If people haven't seen it yet, it will still count for the remaining two weeks of the Directed by Women challenge, so why not check it out?
Top

Nice film.
But it had its share of animal corpses.
I like the part where she said something about animals not being captive when dead.
And then Leaud said that he won't stand dead chicken on the table because he was a jailbird.
But in French, he doesn't say anything of the sort.
he or A. or Armo or any