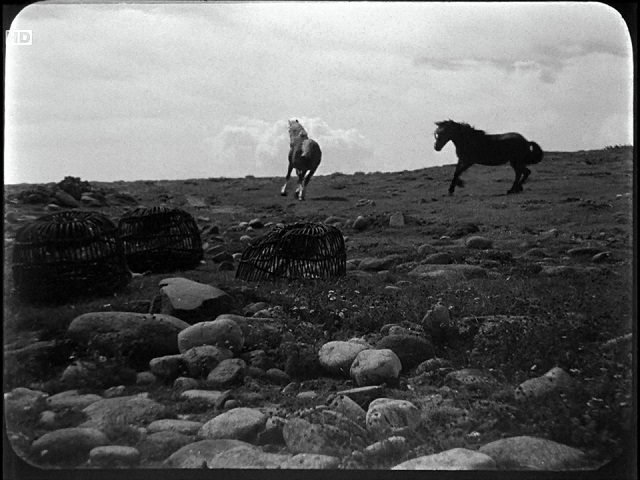 Summary:
On an island off the coast of Brittany four isolated men collect seaweed. Two young best friends have a quarrel and when one's thumb becomes infected his friend must risk his life on the ocean to bring him to the doctor.


This movie fits the current They Shoot Pictures, Don't They? (+21st Century) Challenge.

Been years since I saw it, but it is likely my favourite Epstein. The way the camera moves is absolutely incredible, and gives the story a simultaneously naturalistic and epic/magical atmosphere. An extraordinary experience.
Top

Interesting watch though I'm a bit bewildered what camera moves so impressed St. G. Not saying they're not there; just that's not what impressed me about the camerawork. So let me start with that. There are occasional beautiful shots - a good mix of scenery and composition - but most of the time the camera is serving the story, not giving us lots of picture postcards of the view. What struck me almost instantly though was a sense that the cinematography was moving away from the silent era and towards a more modern concept of cinematography. Okay, let's be frank, there are plenty of shots where the subject is bang in the center of frame and pretty much fills the space, but there are also plenty of shots where someone (there are four cinematographers credited on the film, in addition to Epstein as director) is putting effort into composition. That was quite pleasing.

Another thing that will probably strike one is the movie doesn't have those horrible silent era actors who use such exaggerated gestures that the blind can see their emotions. There may have been one or two instances that were a bit exaggerated, but most of the time, the characters simply were. And were any of these non-professional actors even in makeup? I certainly didn't notice and it's one of the big creeps I have with silents - those black lips! Anyway, I thought the acting worked really well in telling the story. And it's probable the actors wore their own clothes as well. So there's a serious feeling of authenticity in the work.

As for the story, it mostly works though there are No deal breakers, but they did pull me away from the story.

On this being included on a list of documentaries, I find myself wondering what gives. It's clearly narrative in structure though I understand based on real events. Are the actors the actual people recreating their own story? Or were the voters pointing to this film as influential to the genre? Anyway, don't go in expecting a documentary or even docu-drama: this was pretty straight-up drama.

All in all, an enjoyable watch even if I tend to over think things a bit. It certainly is 'better than average' for the silent era, but when taken as a whole and rating against my system, I'd judge it just better than average: a strong 7, but not strong enough to make 8 stars.
Top

While I wasn't swept away by the combo of the acting/storytelling/plot (and I don't think it deserves a spot on the Sight and Sound -The Greatest Documentaries of All Time list because it definitely feels like a narrative and nothing about the film makes it appear to be a documentary), a lot of scenes in the film were beautifully shot. I loved the coastal landscape shots (although I wasn't a fan of some of the closeups on people and foggy boat scenes). I'm not surprised to learn that there were four cinematographers working on the film because there is a difference in cinematography quality between certain kinds of scenes. Overall, I liked the film but I don't love it enough to put on my own list.
Top
Post Reply
4 posts • Page 1 of 1