Call them what you will, comics are a huge influence on culture today, so it's surprising that we don't have a thread dedicated to them, so here it is. Discuss comics you love or hate, argue for or against comics as "art" or "great art", talk about the history and future of the medium, the differences between American, French, Japanese, etc examples. Discuss collecting and buying and selling - a huge part of the comics culture in America for sure. Discuss comics adaptations of other works, and adaptations of comics (but please don't make this whole thread all about anime, there are other places for that). Etc, etc. And make lists of course, that's what we do.
Last edited by OldAle1 on December 29th, 2020, 7:44 pm, edited 1 time in total.
Top

So like a lot of American kids of my generation, I got occasional comics throughout childhood - my grandfather used to give my brother and I western comics when we were elementary school age - early 70s. Later on in that decade I started to buy them myself and of course gravitated to superheroes - one's choices at that time were the dudes in tights, horror comics, Archie, and a few funny animal hangers-on; superheroes already dominated the market heavily but not as much as today I think. Marvel and DC were the only publishers most comic book geeks cared about, at least ones like me who didn't have access to the more "sophisticated" underground comix that had emerged a decade earlier.

By the time I got to college in the early 80s I had discovered some of the alternative and underground scene and by the end of the decade I'd pretty much left superheroes behind, at least in terms of actual reading; I still collected, but that was in part due to the mania developing over investing in collectibles, something that has stuck with me to this day, though I've done far more collecting than selling up to this point. Superhero stuff that had the most appeal to me included the various titles starring Thor, Green Lantern, Doctor Strange and Batman, and to some extent the X-Men; the indie stuff I got into first that stands out were Love and Rockets, Journey (very obscure frontier/wilderness/existential philosophy comic set in Michigan in 1812) Acme Novelty Library, and American Splendor. I also accumulated a lot of stuff that, going over my collection as I have been lately, I wonder at - why did I get all that Ninja Turtles shit? Not that I'm complaining, those are some of the few comics I have that I could sell instantly if I needed the dough - but I never read any of them and thought they were stupid generally. Weird. I do like the fact that superhero comics did grow up to some extent in the 80s, in particular with the work of Frank Miller (Daredevil, The Dark Knight Returns) and Alan Moore (V for Vendetta, Swamp Thing, Marvelman/Miracleman, Watchmen), but I kind of feel like a lot of such efforts are diluted within the realm of the big corporate-owned companies; Miller can do something different with Batman, but at the end of the day Warner Brothers, sorry AT&T, isn't going to let the main title stray too much from whatever it takes to keep the mainstream audience interested. And a lot of the best creators, like Moore, have largely stayed away from the big companies over the years for this reason and others; for my money, most of what is at all interesting in American comics has been in the smaller independent companies for a couple of generations now, though you do get good individual stories or runs even in the most mainstream titles occasionally.

I certainly liked a fair number of newspaper comics - Peanuts, Alley Oop, The Far Side, Doonesbury among them. Never a big Calvin and Hobbes reader for some reason. Would love to collect some of them but they can be massive undertakings and expensive; I do have the complete Little Nemo (just a bit before my time) but I've only sampled a bit of it.

Have read very little in the way of non American/Canadian/British work, unfortunately. A bit of Asterix when learning German - it was and probably still is common to use Asterix and/or Tintin in language classes in the US. Not much manga either - some Lone Wolf and Cub, that might be it.

As I've gotten a little back into the medium I've wondered where to start again in reading; my local library thankfully has a fair amount of stuff, and that's an easy and painless way to explore some of this (comics are fucking expensive in the USA, with prices rising at several multiples over inflation since the 70s). Right now I have out Lady Killer by Joëlle Jones, one of two 5-issue mini-series from the last few years about a young, pretty housewife ca 1960 in Florida who moonlights as a paid assassin; it's fun and I like Jones' art an awful lot - it's clear that apart from her interest in midcentury modern style she also has an affinity for a slightly later period in comics illustration, particularly the work of 70s Batman artists Neal Adams and Marshall Rogers, so it's no surprise that she's gone on to write and draw Catwoman and draw Batman in the last couple of years. I'll have to check those out too if this story holds up.
Top

Here's maybe the best cover from Lady Killer, to give you an idea of the style. Tupperware, sexy maid outfit, sunflowers and bloody murder. 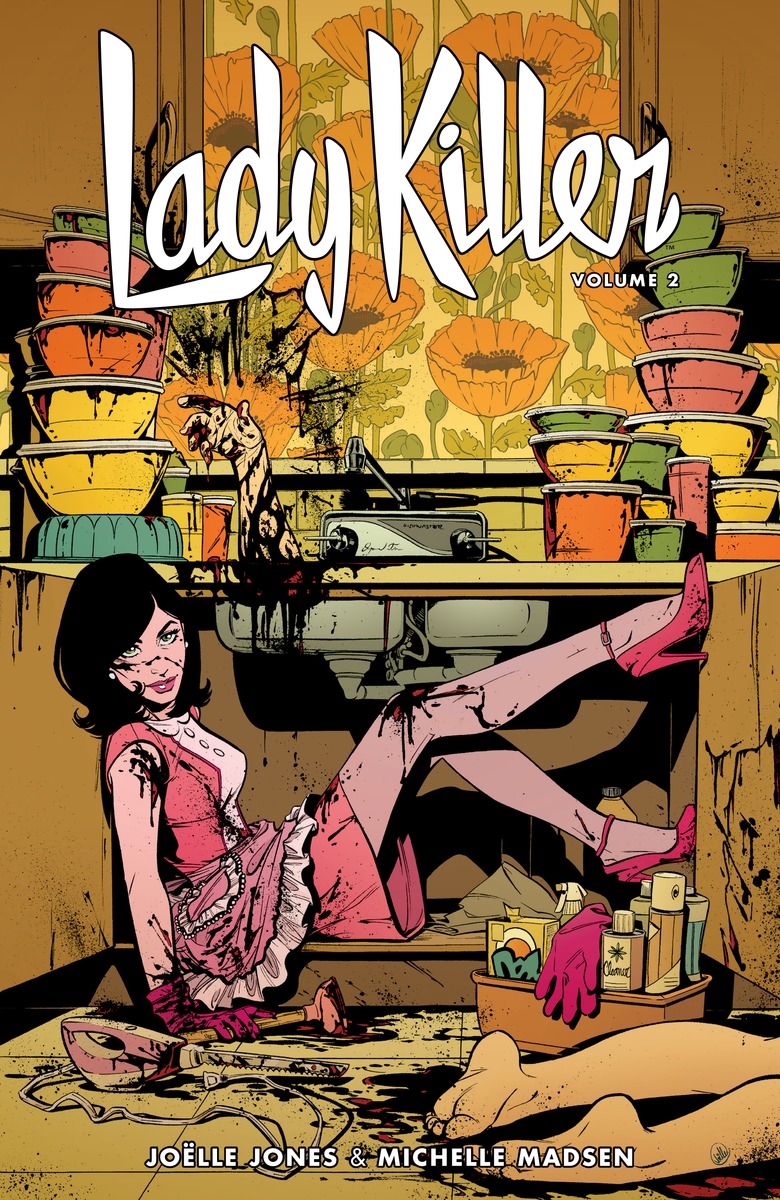 I grew up with the European style comics, so mostly the Belgians (Franquin et al.) and Herge. I still enjoy those and have started buying them for my kids, so they know a little about European non-superhero comics. You know, Lucky Luke, Asterix, Tintin, Fantasio & Spirou, the Smurfs, Yakari and so on...

In my teens I discovered Enki Bilal and Moebius (Jean Girard) and their works, which led me to Alejandro Jodorowski (so I knew Jodorowski as a writer long before encountering him as a film maker) and the likes of Alan Moore. I just bought my oldest daughter the first volume in the Complete Valerian series.

Like OldAle I'm not at all in touch with what's going on in the world of comics, so I hope someone will be able to chime in with more current stuff, but I recommend all the ones I've mentioned above in case anyone's curious. Bilal, Moebius, Jodorowski and Moore are all in the European "art house" vein, so don't expect their work to be suitable for kids.

Though I'm quite taken with Japanese culture/media, I've never really gotten into manga. Like Knaldskalle I was brought up on Belgian strips (as a Belgian, that's not too weird), though I lost interest in those when I was about 15-16 I think.

The one comic that does stand out for me is a manga though, written/illustrated by Tsutomu Nihei (a former architect). Blame! is probably the most cyberpunk thing I've ever seen/read, a completely chaotic mess of biotech madness set in an ever-expanding city (spanning planets). There is an feature film anime adaptation, but while great it obviously doesn't approximate the insanity of the manga. There's also a more experimental 6-episode short series (5 minutes each), but that one suffers from lack of funding.

The dream would be Netflix giving a big lump sum of money to Shinya Tsukamoto to adapt the manga into a live-action film, but that'll never happen

I also grew up with French and Belgian bandes dessinées (BD) and have continued to collect hundreds over the years, building a fairly eclectic taste. European production is so rich that it is hard to keep up nowadays although I must say I am probably old school when it comes to drawing and stay away from the industrial, computer-based stuff. I have also a lot of one-shot graphic novels that are a good way to prolong thematic experience from other art forms
I am not really into US comics, never had real interest for super heroes or ultra-violence/horror: the few that I have and like are Moore's Watchmen, Fables, Fatale, Maus and Burns' Toxic series.

I will try to post what I am reading here. 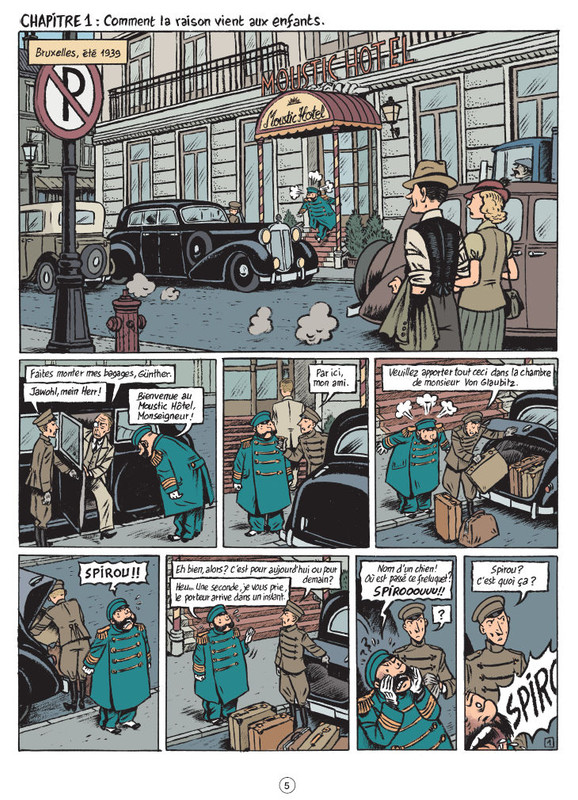 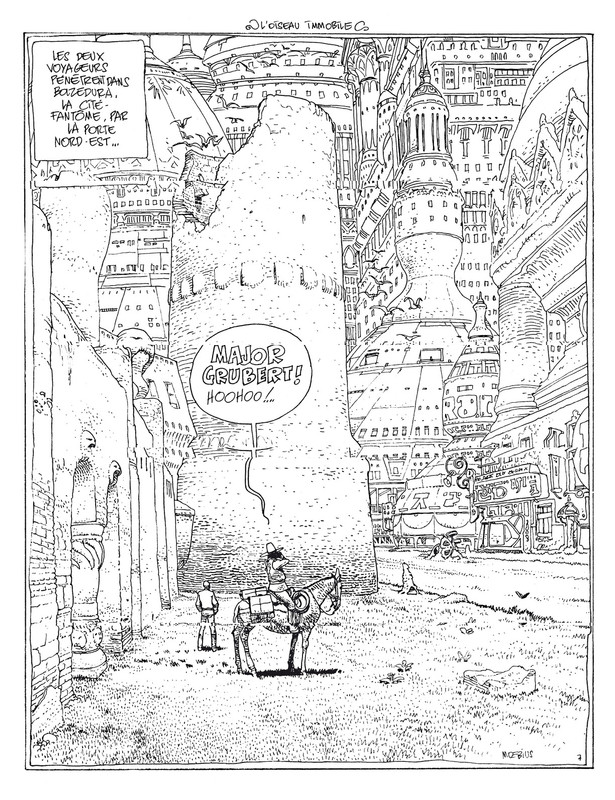 I discovered Sunday newspaper comic strips in WW II -- 1942, to be precise. (Dick Tracy, Little Orphan Annie, etc.) My cousin and I would decide what our favorite comic strip was only to see it discontinued because the artist/author had been drafted. Every Sunday we'd discuss the latest casualties by phone. That's when Brenda Starr, who I think for a long time was the only syndicated strip written by a woman, got a start.

As for comic books (which cost 10 cents), I was only allowed stuff like Loonie Tunes, Disney, Little Lulu and the like.

I was a devoted reader of newspaper comics into maybe the 1980s or so. All time favorites: Pogo (Walt Kelly, 50s & 60s, very political) and the short-lived King Aroo (Jack Kent, 50s).

A year or two ago I got some Asterix & Obelix books in English - would love to see what the French do with all those punning names, like the Roman commandant Crismus Bonus.

Dunno how many of you have heard of any of these, but oh well. I also read my son's Tintin books. (A few years back when he was trying to learn some Indonesian, his teacher gave him Indonesian Tintin book -- I guess so he could say "Thundering typhoons!" in the vernacular.)