I watched the first 1.5 of the earlier lectures. So far I don't like it very much. I'm not sure if I'll finish it.
Top

the newer one has fancy graphics and charts.

have you checked out great courses plus? that might be exactly what you're looking for. personally, there's one on language families that looks pretty interesting. for me at least.
Top

have you checked out great courses plus? that might be exactly what you're looking for. personally, there's one on language families that looks pretty interesting. for me at least.

I'd prefer a free course (and not just a free trial because it might take me more than a month to finish). I might watch the ancient greek history lectures next.
Top

Just finished Death Note. Shortly after I finally started enjoying it, it got a bit dull for a while after
SpoilerShow
Light loses his memory, jesus did that drag on
and the pursuit for Kira was way less interesting than watching Light get more and more evil, and the way things had to change in the latter half of the series was a bit disappointing, though still enjoyable. Didn't really like any characters except for Light, and hated Misa; though she had her moments. One thing I liked about the show is that it's pretty unpredictable. All lot of the time it feels stupid, overly contrived and unrealistic - L is actually a total idiot with his crazy assumptions, that just happen to be right - but it allows the show to go in crazy directions. Overall it was a pretty fun series.
"I do not always know what I want, but I do know what I don't want." - Stanley Kubrick

I don't remember Death Note well enough to talk about it in detail, but I remember that I liked the animation style. The story seems cool and smart if you don't think too much, but if you start thinking, some parts are stupid and unrealistic. Light does a lot of stupid things, but I guess if he didn't do them, the plot wouldn't have been able to move forward.
Top 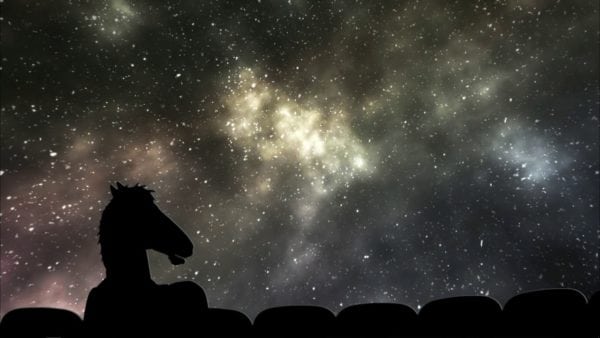 Binged the final 8 episodes today. Actually binged most of the show this month. Stomach dropped a bunch watching it. Just so many incarnations of pain finely distilled into 26-minute segments. But hey, also funny enough to take the edge off.
Top

Of the final eight episodes, I think the penultimate one was the best one and I would have liked it as the series finale. Overall one of the three or four good shows that came out of Netflix.
ICM
February Challenge:

Traveller wrote: ↑
February 1st, 2020, 6:48 pm
Of the final eight episodes, I think the penultimate one was the best one and I would have liked it as the series finale. Overall one of the three or four good shows that came out of Netflix.

Ironically, though:
SpoilerShow
I see the last episode as more depressing. Everyone around Bojack went through terrible struggles of their own and achieved real progress. Bojack is still stuck in a point of realizing how destructive his actions are, wanting to improve and also face consequences for what he's done, but not yet being able to do more than the two steps forward, two steps back thing. That final convo with Diane was absolutely piercing. She, who he thought of as a kindred spirit, literally screamed out "I want to die" earlier in the season, but unlike Bojack did the work she needed to do in earnest. Kept on with the anti-depressants -- not even giving a single fuck about the associated weight gain -- uprooted her life several times, and finally made a real commitment to another person. Essentially leaving Bojack in the dust, not willing or able to be pulled down into his spiral any longer. Her not even being angry, just accepting it and thanking him for the experience he gave her was pretty heart-wrenching.
I also do want to give the show credit for making ostensibly annoying secondary and tertiary characters feel both important and loveable by the end. The "Ruthie" episode finally made me empathize with Princess Carolyn and was probably the biggest gut-punch of the entire show (other than maybe the Hollyhock letter). And with Mr. PB, originally my most hated character, you have this undying loyalty to his friend that finally hits a tipping point from a bothersome Hollywood bullshit friendship to something touching. I know it's partly the whole "loyal dog/man's best friend" thing, but man, it's easy enough to relate. We all seem to have one person like that in our life. Bojack is a complicated person that does horrible things, but Mr. PB is always there.

I didn't want to be another dude spilling words on the profundity of this show, but yet here I am essentially doing just that. I feel like it will become The Wire of animated TV as the years go on. Acknowledged as being painfully true to life, a masterwork that was under consumed in its time and subsequently will be pushed almost too hard by nerds on forums and in internet articles and on podcasts as a work of genius long after its end.
Top

SpoilerShow
True. For what he did Bojack didn’t deserve a good ending anyway. „Sometimes life’s a bitch and then you keep living“ captures it pretty well; that’s, for him, way worse than death. He has to live the (many) things he has done in his life. Everybody moved on (from him), and he knows why: the Hollyhock situation was handled perfectly; Diane could speak her peace too. Even Todd matured a lot (when he took Bojack to the beach).
Plus, there is also the fact that Sarah Lynn’s mother still profits from her death - Sarah Lynn’s story might be the most tragic of the series, which they too captured so well in episode 15.
So yeah, agreed, it was not entirely uplifting.
ICM
February Challenge:

This stuff makes me curious. I'll try Bojack Horsemen out.

I wanna find more lists for tv shows as I am curious, but I find that they are too riddled with imdb, reddit, and netflix fans who have garbage taste. I did discover Get a Life a few months ago and although some of the jokes didn't age well, it was a hilarious surreal deconstruction of the late 80s/early 90s sitcoms.

Any recommended shows like that? Or arthouse-friendly stuff.
Top

Bojack's great. Sad it's come to an end, but also glad it's going out on high (I've got 4 eps to go but I'm confident they won't mess it up from here). If you do start, bear with it for the first few episodes, it took a bit to click
Top

I actually really started enjoying it starting the 2nd episode. Felt surface-level and standard to me, but I clicked with its style of humour. 6 episodes in now.
Top

I haven't seen the show that you mentioned, but I can give you a few arthouse anime recommendations. All of these are surreal and have unusual art styles.

I’ve started rewatching season 1 of Westworld for the 4th/5th time. God, I love it so much. Feels so nice to back in its world. So many characters I’d forgotten I missed. And quotes like Man in Black’s ‘good to be back’ and the stuff about guests returning ‘for the little details’ pretty much sum up my return to the show so far.
"I do not always know what I want, but I do know what I don't want." - Stanley Kubrick

Exciting news--Paranoia Agent is coming to Blu-Ray and streaming (via Funimation)! (it only took, uh...15 years)

Finished season 1 of Westworld the other day. It's impressive that it still blows me away no matter how many times I see it. The episode where
SpoilerShow
Bernard is revealed to be a host
is just so fecking amazing, it doesn't matter that I know it's coming it still gives me chills. That whole scene is just so good, actors all on point. Made me cry a little this time too.

I wasn't going to rewatch season 2, but since I can't resist, I'm now 3 eps in. This is only my second viewing of the second season but I'm enjoying it a lot more. I felt like nothing really came together until the last few episodes but I actually really like the new direction it goes in. Although it has nothing on season 1 (I loved the trauma aspect, and especially the editing/weaving narrative mimicking trauma), it manages to continue the story, keep it fresh, go to a whole new level and still feel like the same show. It felt a bit messy and involving, but light 'binge watching' it instead of weekly eps is much nicer. I've also changed my mind on Tessa Thompson, who I really disliked the first time and just thought was an awful actor but I appreciate the character and her performance much more (particularly after seeing her in a few other things since, and she's really hit and miss).

A week ago or so I also watched the first episode of Sword Art Online, another show my bf suggested when we were talking about anime (he's only seen this, Death Note and Attack on Titan). I haven't watched more yet, but I really like the concept and am interested in where it goes. He said it's the weakest of the three, but he thinks it has the best world building.

One of my nan's also recommended The Fall and Dirty John. Neither are my type of thing, but I watched the first ep of The Fall and it was ok. Gillian Anderson looks amazing for her age, though. I'm going to try and watch a bit of both just so I have something to discuss next time I see her, instead of past lives and auras.
"I do not always know what I want, but I do know what I don't want." - Stanley Kubrick