Welcome to the ICM Forum. If you have an account but have trouble logging in, or have other questions, see THIS THREAD. Podcast: Talking Images (Episode 4 released May 26th) Polls: 1950s (Results), 1966 awards (May 28th), 1935 (May 29th)
Challenges: Comedy, Western, Iberian Peninsula
Film of the Week: Unter den Brücken, June nominations (May 29th)
World Cup S4: Round 2 schedule, Match 2A: Poland vs Mexico (Jun 4th), Match 2B: Tajikistan vs Italy (Jun 14th)

Aaaaaaand hello, they have somewhat similar faces, don't they?

Because she's a fucking terrorist. She jumps on the bed and meows LOUDLY at you. At 4-5am. We've discovered the only way to not desire to kill her is to lock her out of the bedroom at night.

And holy hell - did we adopt siblings?!?

We called her Neko. She was found 6 weeks - 2 months old, alone in a forest. Hence she misses some social skills and she's very much a scaredy-cat. She's 6 now and even though she has some quirks (what cat doesn't), she has adapted quite well to us. She's not a fan of strangers though.
Last edited by Onderhond on March 30th, 2018, 9:58 am, edited 1 time in total.
My film review archive

i also have a tortie. baby picture of her 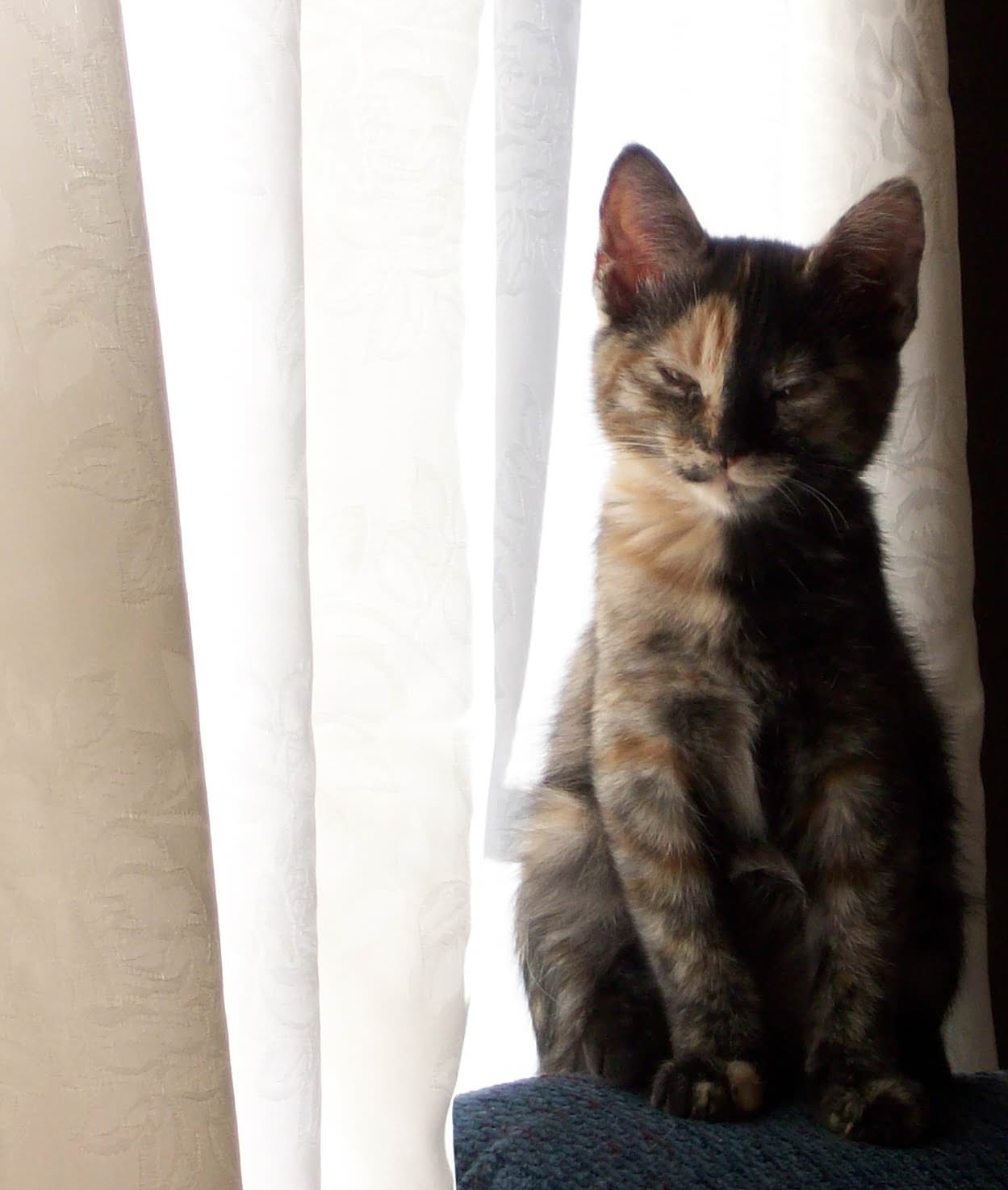 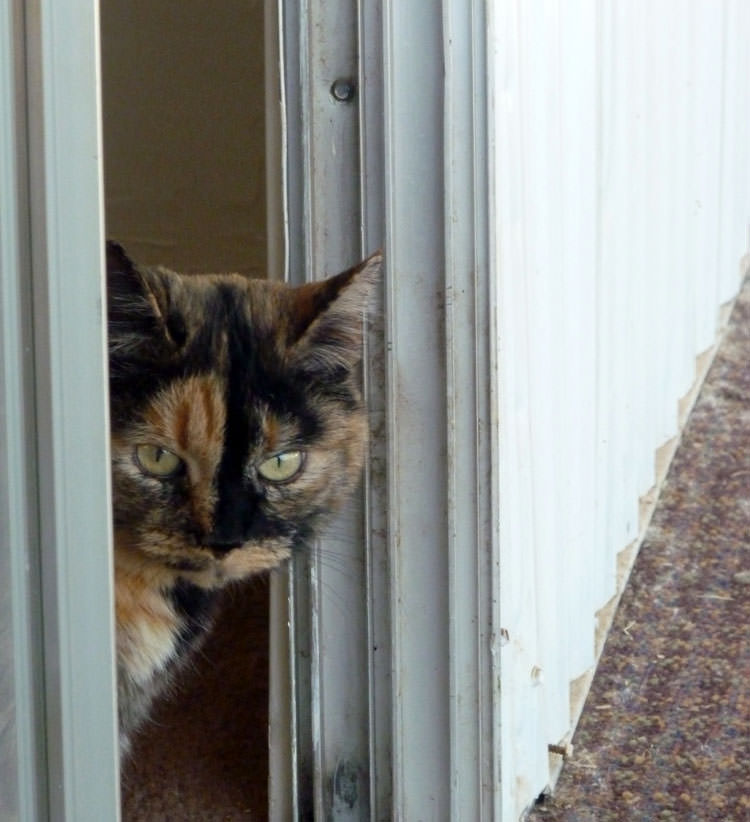 Hah, that first pic is just too cute. They're supposed to be quite a handful, though yours looks pretty sweet. Then again, most cats do ... until they want/don't want something.
My film review archive

oh she's mostly evil; hates people (sometimes including me), hates to be picked up, sleeps with me only when it's cold, loves to hide and randomly attack when i walk by, sometimes gives a look like she'd like to kill me (cats don't play, they practice). but mostly we get along as long as i feed her and don't throw away her favorite boxes. if i died and they didn't find my body she'd totally eat my face 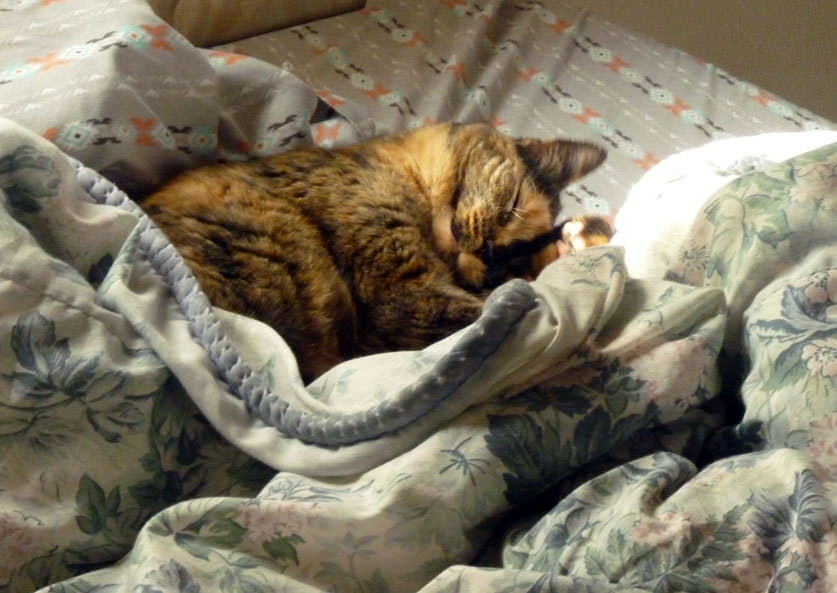 Yea, that sounds about right

RBG on Mar 31 2018, 11:42:24 AM wrote:oh she's mostly evil; hates people (sometimes including me), hates to be picked up, sleeps with me only when it's cold, loves to hide and randomly attack when i walk by, sometimes gives a look like she'd like to kill me (cats don't play, they practice). but mostly we get along as long as i feed her and don't throw away her favorite boxes. if i died and they didn't find my body she'd totally eat my face

Sounds like my cat, too, up until ~a year ago. We'd had her for about 4 years at that point, and somehow almost overnight, she turned into MY kitty. Still doesn't like being held all that much, but sometimes she'll demand that I hold her. And will sit on my lap on the rare occasions the mood strikes her.
Top

My adorable little furball is finicky about her litterbox and won't use it if it's been used. Which isn't a problem during the day, but becomes problematic at night when my wife and I neglect her and have the audacity to sleep. She's pretty much the reason we have a steam cleaner for our carpets.

Anyway, one night she (of course) pooped on the carpet. By the DVD shelf. Then knocked over some of the DVDs and tried to "bury" her poop with DVDs.

The one she chose? Teen Wolf 2
Top 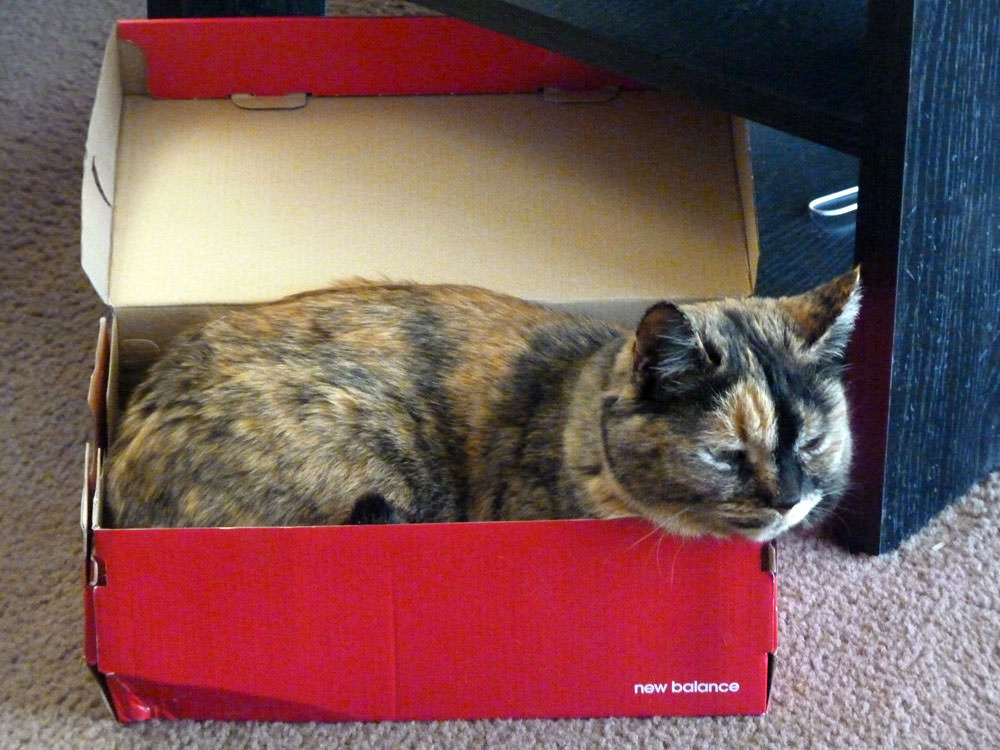 How cute! Mine's the same.

(found on the internet) 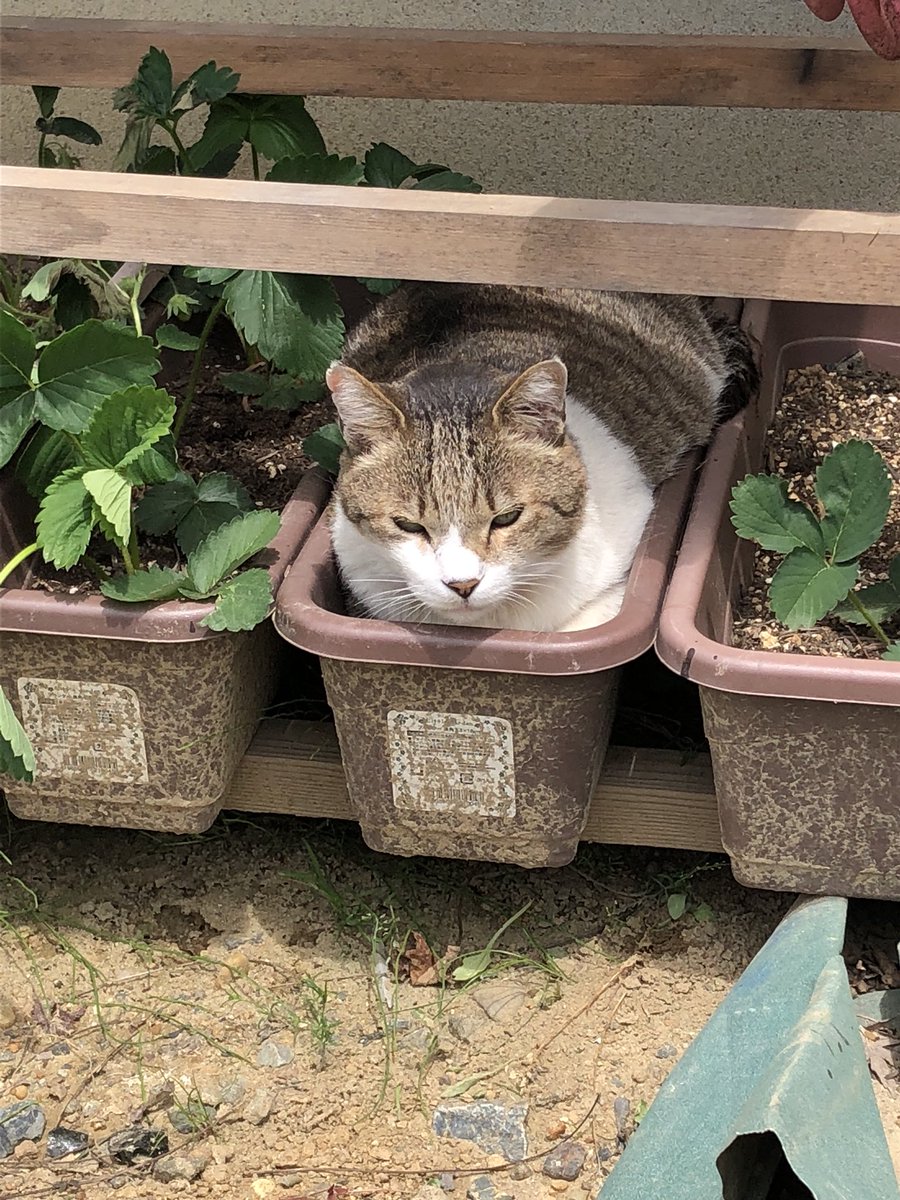 mario you should start a cat circus
icm + ltbxd

bringin back the cat lounge

i just read of the 'acoustic kitty' project! the CIA tried to use cats as spies but they were impossible to train

I rewatched BBC's Panet Earth recently. I was reminded that kodkod cats are the cutest animals all over the world. Just look at them.

Anyone seen this one? Looks cheesy but who cares when there's cats involved.
Top 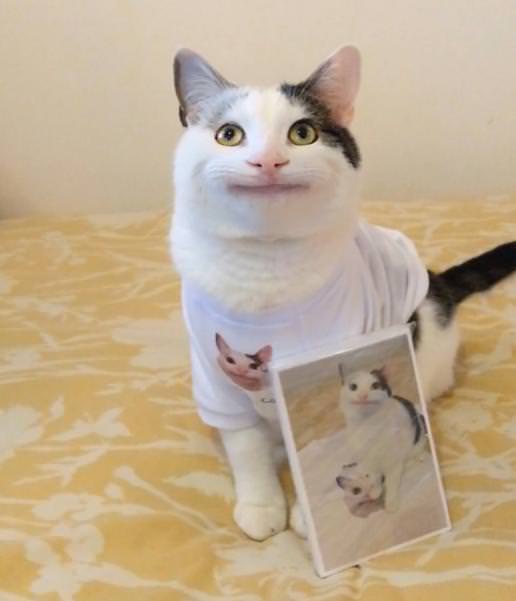 WHOA does that cat have enough toys?? fyi they're just as happy with a ball of paper and cardboard box lol. very sweet. good luck tato.

here's something for you jvv

ok it's not strictly cat related

I'm sure the lady that runs that rescue is aware of that.

Happy Friday from Gus the cat... looking forward to Caturday!! 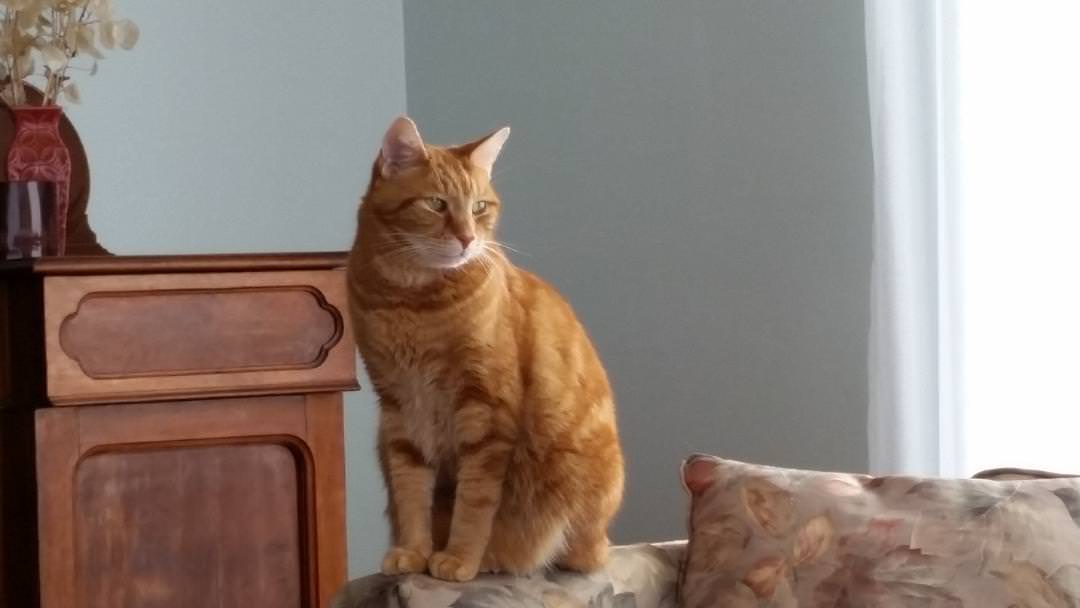 Last edited by GruesomeTwosome on November 5th, 2019, 8:36 pm, edited 2 times in total.
I’m to remember every man I've seen fall into a plate of spaghetti???

Oh that poor cat...lol. and those guys were doing all the wrong stuff to try to capture him...
Top

For Christmas last year, my wife got me the book Cinemaps - it's a book with short essays and an artistic map of every setting in the film. The map has an interpretation of every setting in the film, but also includes a path of where every character went. You can literally follow the movie and see who everyone was with by following the map. The essays are meh (mostly plot rehashes with a tiny bit of analysis), but the maps are legit awesome. The first movie I watched from the book (IJ Last Crusade) had such a cool map that I spent 1+ hours looking at the map.

Anyway, I suggested we watch a movie from the book tonight. Wife picked it up, glanced at the ToC, and said "We're watching Clueless - I haven't seen that since I was a teenager." Aside from the major weirdly icky plot point, it's fun. I loved the fashion and it was cool to reminisce.

So why am I posting this here? Because about 5 minutes after I finished looking at the book, this happened: 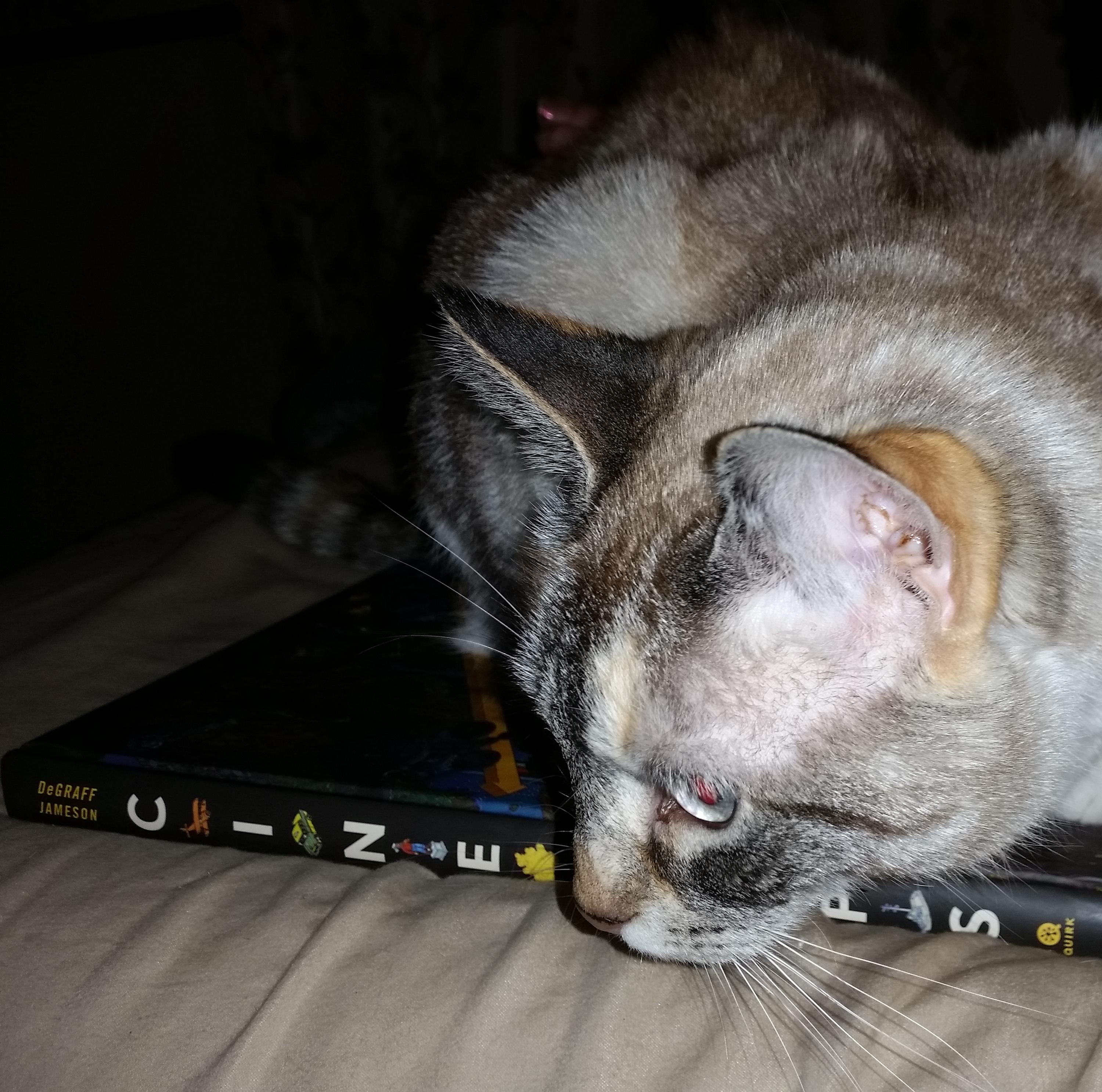