Welcome to the 1960s challenge! 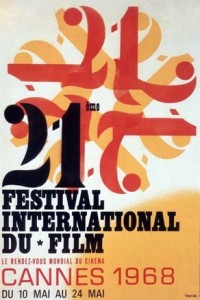 The 1960s had more than a fair share of wars, coups, nuclear threats, fights for independence and other events rocking the world as it had been established after the two World Wars - including new social and political movements that found its footing and fought old systems that did not work for one reason or another. The May 68 events in France directly affected the business of art cinema, as the Cannes that year was cancelled, and no awards were given. The bonus challenge for this month's 60s challenge is to watch films of the 1968 Cannes official competition. Which films would you have awarded the Palme d'Or and Grand Prix?

My main focus for next month. I made watchlist that ended up being of quite excessive length but it's simply the most exciting decade. If anyone has recommendations (including prioritization of movies not in the top 25 of this list), feel free to share

Thanks for the lists Melvelet!

The 1960s is indeed very exciting, I have a lot of films on the canon yet to watch from this decade and look forward to delving a bit deeper. As for your watchlist Melvelet there's so much good stuff there already that it is hard to pick recommendations. I could watch I compagni any day of the week though, delightful and funny film with masterful cinematography.


Any stats you would like to see for this challenge? I'll definitely steal previous ideas of keeping track of most popular years.
Top

Yay on a public holiday allowing me to be the first to contribute this month.

This boasts some excellent stunts and choreography, especially as two swordsmen drink from teapots while fending off various attackers. There are some neat special effects too, such as a slowing down of frames that creates an illusion of multiple swords. As a narrative though, this is tepid. The central mystery is always less engaging than the action, especially as the characters take to talking aloud to themselves in order to convey their ideas.
Former IMDb message boards user // iCM | IMDb | Letterboxd | My top 750 films // Long live the new flesh!

Kirk Douglas and Kim Novak turn in surprisingly down-to-earth performances here considering that the film that they are in feels like an overlong soap opera episode; the movie is also lusciously shot by Charles Lang with rich colours and lots of shadows (see above). Still, it is hard to get on the same wavelength as the characters since their romance results from sheer boredom and seemingly little more; Brief Encounter this is not. Annoying son too.
Former IMDb message boards user // iCM | IMDb | Letterboxd | My top 750 films // Long live the new flesh!

An inevitable double feature - if you don't mind. 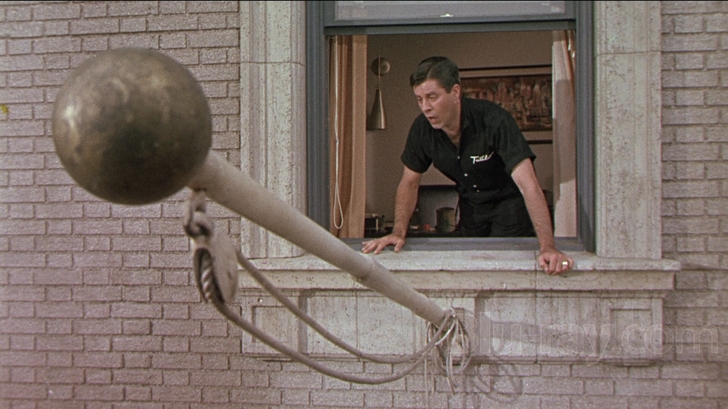 This is highly episodic as we go from one comedic mishap to another, with quite a few extended gags - especially trying on shoes - lasting too long. The gradually bonding between Jerry Lewis and John McGiver is excellent though and Lewis shows some real ingenuity in completing some of the hard tasks. The film's funniest sequence though, involving an out-of-control vacuum cleaner, feels like a pale imitation of the hose gag Rock-a-bye Baby. 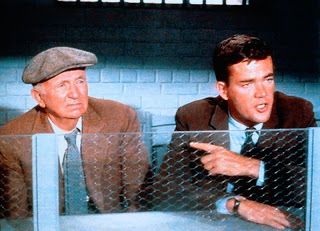 This is slow to warm up with half the duration spent on getting recruits, all of which predictably have their own problems, which leads to more and more recruits being roped in. The actual heist, when it finally starts, is both suspenseful and hilarious though with some zany moments as they slide and crawl about the floors of the mint at night to the complete oblivion of all the security guards and cleaners on duty. There is funny loudspeaker here too.
Former IMDb message boards user // iCM | IMDb | Letterboxd | My top 750 films // Long live the new flesh!

I'll be in. Got some horror and cult movies from the '60s lined up to watch as well as some that overlap with other challenges this month.
Top

Has such an interesting impulsive character, the film too seemed to be acting on impulsive until it turns out it wasn't. Thrilling watch and great start to the month!
Last edited by Lilarcor on June 1st, 2020, 9:54 pm, edited 1 time in total.
Top

Year of release stats after 5 watches: 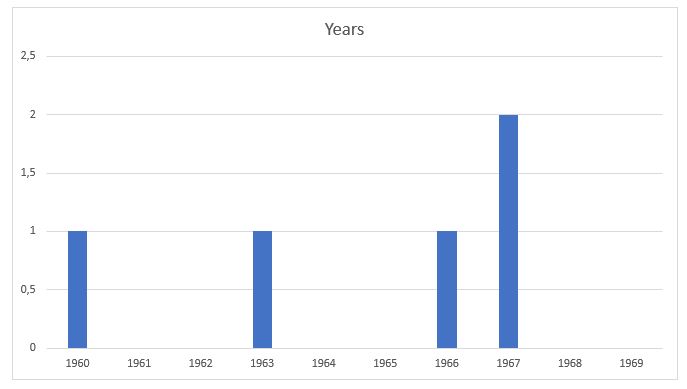 1. Masculin féminin 1966 — a.k.a. Masculine-Feminine 6/10
I will read more about this alter today but I have a feeling this will blend in with a couple of other Godard movies in my memory, without any specific characters or statement remaining.

Love the daily stats idea, though don't feel obligated to post them that regularly if it is a lot of work.

Initially this feels unfocused as it begins to hone in on a courtship between a young woman and the protagonist's partner, but her role in the plot ends up driving things more than anything else; the film actually ends up more about the treatment of women without agency in the times of the Old West. Yet while this focus makes this decidedly different from most westerns of its era, and while Mariette Hartley tries her best, I still found this a bit 'eh'.
Former IMDb message boards user // iCM | IMDb | Letterboxd | My top 750 films // Long live the new flesh!

1. The Italian Job (1969)
Cars were neat, heistiness was fun, and the scenery/setting was awesome. Everything else was "meh", but the film was fun enough overall.

2. The Party (1968)
I'm not a fan of slapstick, so this was a bit of a drag to get through. Really enjoyable color palette and some cool sets/stunts, but it was more of a chore to get through than it was enjoyable.
Top

Great old-school poster though, would not be too out of place in the 1920s! 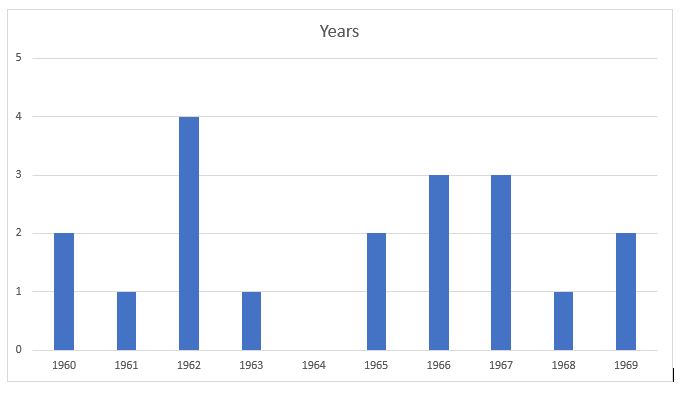 Semi-fun fact about today/tomorrow in 1964: On June 3, 1964 James Purefoy (Mark Anthony in the tv-series Rome) was born!

(counting The Italian Job as a UK film)

As for updates like this I'll try to do it regularly, usually around this time of the day (after my daily evening movie

Well, I mean it all depends on whether you prescribe to the concept of Eternalism and more specifically in the block time model and how it relates to the theory of quantum gravity by which time is postulated to be an independent variable that is not relative to a given observer but is static in nature and exists all at once. This would mean that within the state which we exist we just happened to witness 1926 happen before 1962, but it reality there are alternate objective states which may have indeed observed them in the opposite order assuming the state is in a non-linear timeline. I mean, I could be wrong though. I'm just a systems architect. Dunno jack about quantum physics stuffz.

A family gets lost on the road and stumbles upon a hidden, underground, devil-worshiping cult led by the fearsome Master and his servant Torgo.

3. Charulata 1964 — a.k.a. The Lonely Wife 8-/10
Might have enjoyed it more if I had watched it in a more quiet environment and without a gf that got impatient because of the pacing. The swing sequence and the "Charulata writing inspiration" sequence were especially great.

Not the best moment for me to embark on a challenge but I just can't resist my favourite decade, so here I go:

1. TINTIN ET LE MYSTÈRE DE LA TOISON D'OR (Vierne, 1961) — A dynamic adventure in the Eastern Mediterranean (Turkey and Greece), filmed after Tintin in Tibet, it summarises many of the elements seen in previous titles (journey to exotic places, ciphered message, hidden treasure, car chase, Calculus' invention, international gang mixed with state affairs, etc.), the live-action depiction of both characters and locations looks quite good (cars and ships, in particular), although (over-bearded) Haddock's role is often more prominent than Tintin's, due in part to the performance of an actor whose startling resemblance bears not enough charisma; it could have been easily one of the best books in the Tintin series and, as a lifelong fan of Hergé's masterwork, I quite enjoyed it. 7/10
Last edited by sortile9io on June 5th, 2020, 8:00 am, edited 2 times in total.
iCM
Top

This offers a decent wraparound story with a neat (if a tad predictable) ending that ties everything together well; as per horror anthology norm though, the individual segments vary in effectiveness. The fourth tale with an increasingly unhinged Christopher Lee is easily the spookiest and best acted, but the second tale is decent too with a more original idea (a killer intelligent houseplant) than the other three tales, which all tread familiar territory.
Former IMDb message boards user // iCM | IMDb | Letterboxd | My top 750 films // Long live the new flesh!

Rewatch with the wife for NO PARTICULAR REASON WHATSOEVER. This actually rose in estimation for me - the whole atmosphere of the film was spot on, and Poitier and Steiger nailed the subtleties of acting those roles. Amazing performances by both. I was also interested to learn that despite being set in Mississippi, they didn't film it there because Poitier was terrified he'd be under constant threat. The one location scene they had to shoot there was cut short because of exactly that.
Top 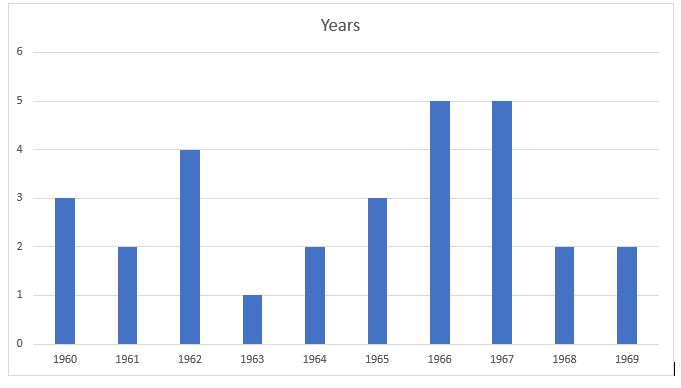 Thanks to Melvelet and peeptoad for getting 1964 up and running. 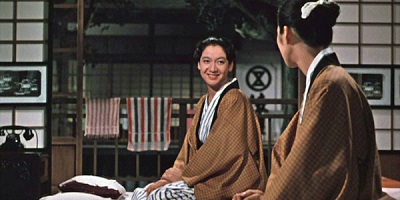 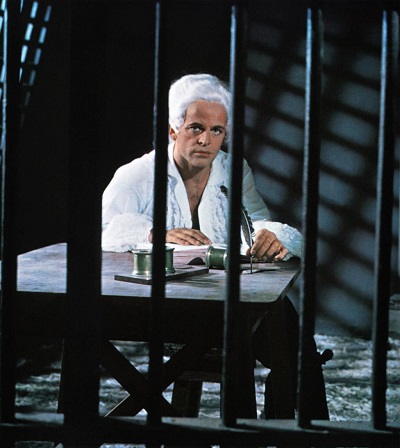 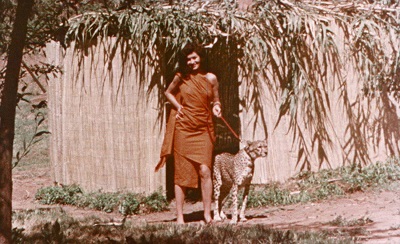 The behind the scenes of a national drag queen contest in New York City, including the rehearsals leading up to the contest, the conversations in the dressing room and the jealousies that emerge before and after the competition.

John is a shipmaster on a very small transportation boat which regularly attends a very small harbour to buy food, actually from Anna's father. She is a waitress and has a young daughter.