Welcome to the ICM Forum. If you have an account but have trouble logging in, or have other questions, see THIS THREAD.
NOTE: Board emails should be working again. Information on forum upgrade and style issues. Podcast: Talking Images (Episode 22 released November 17th * EXCLUSIVE * We Are Mentioned in a Book!!! Interview with Mary Guillermin on Rapture, JG & More) Polls: Directors (Results), 1929 (Results), Directorial Debut Features (Mar 12th), DtC - Nominations (Mar 20th), Favourite Movies (Mar 28th)
Challenges: UK/Ireland, Directed by Women, Waves from around the World
Film of the Week: Lean on Pete, April nominations (Apr 1st)

A great production, with a few brilliant ideas of shots and camera movement...

Co-written by co-star Sidney Poitier, this film is not quite as racially insensitive at it might at first seem with the two potential lovers taking things in their own direction after the awkward first date set-up. It still all feels a little in poor taste, what with everyone conspiring to prevent Ivy from bettering her career prospects, but the performances are very decent when one gets over the ickiness of it all - and the theme song is beautiful.
Former IMDb message boards user // iCM | IMDb | Letterboxd | My top 750 films // Long live the new flesh!

maxwelldeux wrote: ↑February 16th, 2020, 6:59 pm But the music, especially in that opening scene (which I'd heard, but didn't know the source of), was pretty awesome.

A jazz trio cover of that music from a group I really like. Definitely not for everyone.


The Bad Plus is pretty cool. I think their covers can be a little hit or miss though. Their version of Smells Like Teen Spirit didn't really do it for me. But that Chariots of Fire cover is a really good one.
Top

13. Big Fish (2003) - Best Original Score [nom]
This is my favorite Burton - just a very sweet story about a man getting to know his father. Wife hadn't seen it, so we watched it. And it was just as joyous as it was the first time.
Top

4. The Lighthouse (Eggers, 2019) Nominated for Best Cinematography
It didn't hit me as hard as The VVitch, but this is an excellent follow-up, with the cinematography and antiquated aspect ratio perfectly suited to convey the bleak location that drives the protagonists mad. Amazing performance from Defoe as well. The gradual descent into madness and deliberate repetitiveness is offset by the script's intriguing mix of Melville, Coleridge and Greek myth.
7/10 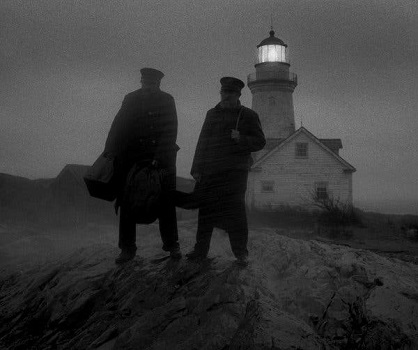 5. Gisaengchung / Parasite (Bong, 2019) Won Best Picture, Best Director, Best Original Screenplay and Best Foreign Film. Nominated for Best Production Design and Best Editing
Bong reaches new heights with this. His directorial skill is superb, and the way that the story flits between genres makes it unpredictable and compelling. It also feels like a new phase for him. The social commentary that informs his films is present, but is more subtle and non-judgemental than previously, making it feel like a more organic film.
8/10 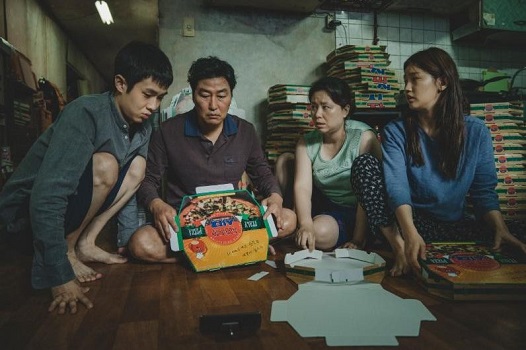 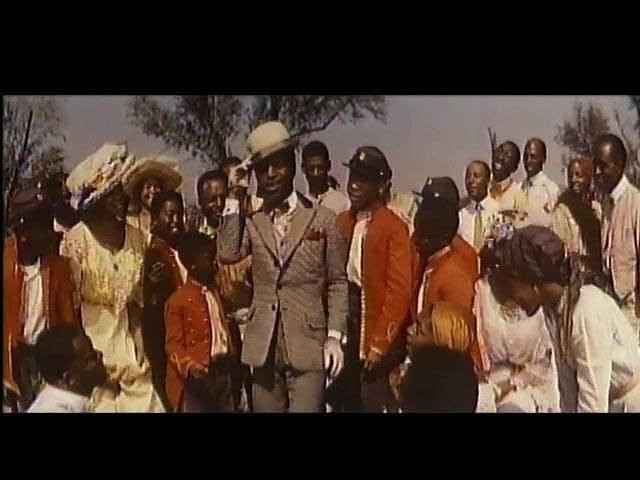 Some of the songs are catchy here, but the history of this film is more interesting than the movie itself, from the lack of an official home video release due to disagreements between estates to Samuel Goldwyn's insistence in shooting on soundstage, to director Otto Preminger's filming everything in long shot. The result is an incredibly distanced, with the noticeably fake sets, few close-ups and nearly entirely sung dialogue making immersion difficult.
Former IMDb message boards user // iCM | IMDb | Letterboxd | My top 750 films // Long live the new flesh!

This film has a decent premise but goes off on tangents too often. The initial friction between Bing Crosby and Barry Fitzgerald is wonderfully handled with Crosby having no idea how to tell to Fitzgerald that he has been sent to replace him rather than work under him. Fitzgerald's "ability to see the inevitable" speech is heartfelt too. The tension between the pair resolves too quickly though and all subsequent plot strands are underwhelming.
Former IMDb message boards user // iCM | IMDb | Letterboxd | My top 750 films // Long live the new flesh! 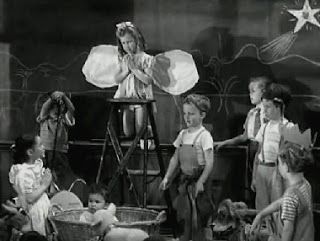 With more comedy (a yawning dog and mischievous cat-in-the-hat) this time round and a couple of great supporting turns from Henry Travers and Joan Carroll, this is often regarded as superior to Going My Way. It is not a massive improvement though, with the film once again tending to get lost in its subplots; there are also some iffy messages in the mix, but this is fairly likeable and the first grade Christmas play (see above) is simply charming.
Former IMDb message boards user // iCM | IMDb | Letterboxd | My top 750 films // Long live the new flesh!

TCM. Third viewing, maybe fourth. I love these light and comedic crime films from this period, though truth be told few of them are good enough to watch over and over or make my favorites list or anything. Part of the problem with the ones from the earliest period of sound is, in fact, the primitive technology, which typically makes for broad and loud acting and not very interesting camerawork (hard to move the cameras around and catch dialogue at the same time). Of course that's a problem for every kind of film, but these types of pictures rely on lots of dialogue and typically weren't big budget and so often - the Philo Vance films are good examples - seem very creaky indeed, even compared to other films of, say, 1929-32. This film beats most of the others in the era pretty handily and maybe it's no surprise given that the photography was handled by an old pro from the silent era, George Barnes, and an up-and-coming young guy named Gregg Toland. William Cameron Menzies, one of the greatest of all Hollywood production designers, worked on the sets and future directors Stuart Heisler and H. Bruce Humberstone were also present in editing and second-unit capacities so this had a wealth of talent behind the camera, ensuring a better-sounding and better-looking take on this kind of popular genre piece than most. And it's not a bad story either, with Ronald Colman as the title character, a gentleman thief who is on the verge of retiring when his gambling-addict buddy suddenly needs a thousand pounds (an enormous sum at the time) and the possibility of an easy jewel robbery presents itself. This has some creaky moments for sure but I love Colman, and David Torrence as the initially snotty Scottish inspector on the case is just as good. And the camerawork and lighting are top-notch, with a long tracking shot that goes down a hallway, into a room full of people, zooming in close and then panning a highlight, and a pretty impressive feat for a sound film in 1930.

TCM. Also third or fourth viewing, but first in quite a while. I've always liked this film about a brief but potent romance, mostly taking place in a railway station cafe and it's environs, but it took until this viewing to really lodge it into the strong favorite category. I think I used to have something of an issue with Celia Johnson - her upper-class delivery and general quick, almost shrill delivery takes some getting used to - and with the comedic elements involving Joyce Carey's shop owner and the flirtatious ticket inspector Stanley Holloway. I guess the latter bothers me less now and I suspect it exists to lighten the mood a little - it's a pretty gloomy film in many ways otherwise - and also to show perhaps an alternate kind of romantic experience, a casual and conversational bit of fun that Johnson's married, middle-class, rather neurotic Laura and Trevor Howard's also-married and needy doctor Alec probably can't even imagine in their intensity and fevered obsession. The way the flashback - the whole film really - is set up, and the slow reveal of the sad short relationship-to-be are brilliant evocations of the suddenness and pain that love at the wrong time and place can bring, and the feeling that this could be the most important even in either person's life, a life-changing experience, are palpable throughout. If it has a flaw of any significance, it's that we don't really get to know Howard's character as well as we might want to - it's clear just through Laura's thoughts and actions what he gives to her that her husband can't provide, but we get no sense of the same in Alec. It's also more clear from this viewing just how much Clint Eastwood and his screenwriter Richard LaGravenese were influenced by this film - the bridge sequences, and much of Celia's inner dialogue in particular, in making The Bridges of Madison County, the only other romance of this particular type that IMO can stand with this masterpiece. Probably deserving of it's nominations in a great year for Oscar nominations, though I haven't seen everything in the categories it received nods for.

TCM. This won it's cinematography award and at the outset I will say that it stands up pretty well against the now much more famous Psycho, Inherit the Wind and The Apartment, the other nominees I've seen. It's in b/w 'scope, a format I just love when done properly and it certainly is here, though given the amount of time we spend in cramped living quarters it might seem an odd choice. Still the hilly coal-country landscapes are beautiful and it's consistently enjoyable to watch from a pure visual standpoint, and the vastness of the scenery does seem to reflect the desires of many of the younger characters to get out, away, into the wild, wide world. Alas I wish I could say I liked the rest of this dreary D.H. Lawrence adaptation as much, though to be fair a huge part of the problem lies in the miscasting of Dean Stockwell as Paul Morel, the youngest (? it wasn't clear) and most rebellious and independent son of coal miner Trevor Howard and long-suffering wife Wendy Hiller, living in squalor in the English coal country early in the last century. Apparently Stockwell was pushed into the mostly British production to help the film's box office chances in the USA - which probably worked, it did fairly well and obviously got a lot of Oscar attention - but unfortunately his accent seems to vary scene to scene and sometimes word-to-word and he just comes off all wrong, more an angry young man of the 60s than of the 10s. And the film as a whole just doesn't to my mind feel very much like a work of the time the novel was written/set, and much more like the typical British contemporary films of the period starring people like RIchard Burton or Oliver Reed, and is just a mess ultimately. Wendy Hiller is really good though, and Oscar-nominated Mary Ure and Trevor Howard are fine, so it's not all a loss but a very mixed bag at best.
Top 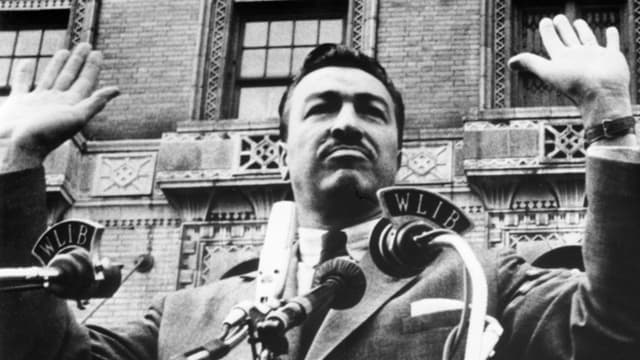 Not a household name like MLK, it is curious to hear civil rights leader Powell's tale here, and as the documentary starts by praising his achievements, it initially seems strange how forgotten he now is. As the film progresses though, mounting controversies are revealed, from Powell pledging bad cheques to a campaign to slander MLK's name, who he saw as a rival rather than a comrade. Was he an egotist or someone genuinely interested in civil rights?
Former IMDb message boards user // iCM | IMDb | Letterboxd | My top 750 films // Long live the new flesh!

Rankings updates coming later in the night. Sorry for the delays, I've had a craaaaazy busy month.