Welcome to the Travel the World Challenge. Formerly known as Conquer the World, it has been renamed because we've had our fill of imperialism as a species, haven't we?

Goal
Watch one movie/short/episode/miniseries from as many different countries/territories as possible.

Nationality -- PLEASE READ THIS SECTION
I want to spend as little time as possible this month writing about matters of territoriality, sovereignty, and federalism. While these issues are very important, I think this challenge is not the ideal place to go back and forth regarding our thoughts on the autonomy of Western Sahara or whether any particular co-production is more French or more British. As such, please use the following rules:
- We will be using imdb as the sole source for determining nationality. This is not a perfect method, but it is relatively simple, and imdb is a fairly comprehensive resource. If you see something that does not have an imdb page, then you choose which country it should count for, but please be reasonable in your determination.
- To determine a movie's nationality, look at its imdb page. You will find a country listing under the section titled "Details." If more than one country is listed there, then you can choose ONE of those countries. For example, the 2000 biopic Lumumba has four countries listed: France, Belgium, Germany, and Haiti. If I saw Lumumba for this challenge, I could post it for any of those four countries. Once you indicate which country a movie counts for, you can't go back and change it later. Again, it's not a perfect method, but it gets the job done.
- Here is a list with every imdb country code. The countries/territories in this list are the only eligible ones for this challenge. As such, the maximum score in this challenge is 246.
- For movies that are listed on imdb as being made in a country that no longer exists, please list the current-day country that is analogous. This should be pretty easy to figure out if you see a West German movie -- obviously, you list it as a German movie. It's a little harder if you see a Soviet or Yugoslav movie. If you do so, please list whichever current-day country you feel it properly belongs to. So, if you see a Soviet movie, you could list it as a Russian or Ukrainian or Uzbek movie. Please be reasonable in these cases. Don't list a movie like Nevestka as a Latvian movie when it's clearly a Turkmen movie.

Stats & Formatting
- Title (Country/Territory, Year) is the preferred format. Submissions that do not mention the country/territory will not be counted.
- New posts are preferred over edited posts.
- Since this is a community project, participants are encouraged to post their reactions, thoughts, and ratings. The challenge is more fun and interesting when discussion is ample and it's possible to pick up recommendations.

Lists
Well, every movie, short film, TV show, and miniseries ever made is eligible for this challenge. So, feel free to look at any list. But if you want a purposefully global list, I suppose the following could help:
The 100 Best Films of World Cinema
UNESCO's Memory of the World: National Cinematic Heritage
There's also this submission from Max

Doubles and Triples
Every documentary ever made is a potential double. There is only one triple possible--the Italian documentary of your choice.

Thanks for hosting, blocho! I very much enjoyed reading your thoughtful introduction.

I like this part a lot and think it is a very wise and fair system to adopt:

- For movies that are listed on imdb as being made in a country that no longer exists, please list the current-day country that is analogous. This should be pretty easy to figure out if you see a West German movie -- obviously, you list it as a German movie. It's a little harder if you see a Soviet or Yugoslav movie. If you do so, please list whichever current-day country you feel it properly belongs to. So, if you see a Soviet movie, you could list it as a Russian or Ukrainian or Uzbek movie. Please be reasonable in these cases. Don't list a movie like Nevestka as a Latvian movie when it's clearly a Turkmen movie.

Looking forward to this challenge!
That's all, folks!
Top

I'm in! Actually for more than the docu challenge I'm hosting. Will have to change my watchlist a bit because of the imdb rule but no problem at all.
I saved Latin, what did you ever do ?
Top

This is my favourite challenge this year so yeah, I'm in.
Top

Wanted this challenge in March when I already do it on Letterboxd but I'm still in anyway, been saving up quite a few movies that I have to watch due to personal challenges so I can't wait for december
Top

In! I'm probably going to see how far I can get by focusing on Documentaries from around the world.

One suggestion for the OP: jvv's list of countries from the unofficial version of this challenge: viewtopic.php?p=611497#p611497
Top

In. I'll probably be a bit all over the place (pardon the pun).

How about we get this show on the road with a classic.

After an intriguing opening in which a wealthy man tortures and murders a prostitute who reminds him of his deceased wife, this luridly titled giallo becomes a dialogue-heavy affair with little of note happening until halfway in. The stuff that happens halfway in is enthralling though with suggestions of something supernatural afoot and things become especially twisted in the final quarter of the movie with many memorably macabre moments. 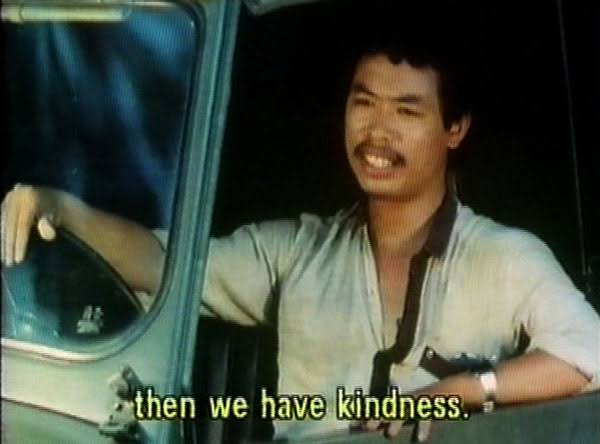 Rambling and unfocused but fascinating, this documentary springboards from a group of filmmakers deciding to record one of their colleagues who is dying of a terminal illness. As they interview different citizens about what kindness means to them, the documentarians also reflect on their existence, how their job involves something that is not needed, as well as the benefit of narrative cinema when there are so many real life stories that go untold. 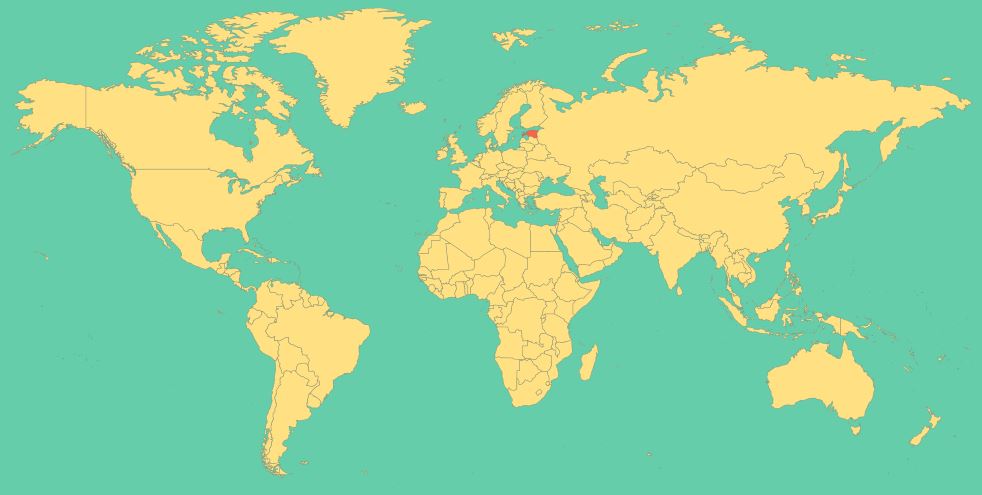 Morgan Spurlock is a fun personality, and much like his Super Size Me and Greatest Movie Ever Sold, this is an entertaining watch from start to finish and there some imaginative animated sequences and original songs in the mix. Spurlock does not, however, succeed in linking his search for Osama to his parenthood anxieties and spends far more time asking locals what they think of America rather than what they think of Osama and where he is.


Also love the maps you guys are using, pity I'm not that knowledgeable to do it myself.
Last edited by zzzorf on December 1st, 2019, 9:08 pm, edited 1 time in total.
Top

https://traveltip.org/countries_visited.php
and you get a link you can use
ICM Profile - ICM: latest checks
IMDb Profile - IMDb page - Criterion

I’m in. Thanks for hosting Blocho.
My iCM
Top

1. Why Shoot the Teacher? (Canada, 1977) - 6/10
A comedic depiction of the bleak life during the Great Depression in the Canadian prairie. A little too slow for my taste, but I liked the atmosphere and setting.

2. Kajaki (UK, 2014) - 7/10
A tense film about a team of soldiers stuck in a minefield. Wonderfully shot, there's no way to predict who will end up unharmed.

Not sure why this isn't tagged as a doc on IMDB, but oh well. It's a look at an Italian prison's performance of Shakespeare's Julius Caesar. Nice cinematography, shooting prison scenes in black and white, with the live performance in color. Lots of rehearsals with a few breaks in action so you get to see the prisoners themselves a bit. Interesting blend of documentary and drama and comes across relatively innovative to me.
Top

Earlier this morning, I randomly picked this film, and as I was watching it, I thought, "Gee, it would be fun to join the Travel the World Challenge and just see how many countries I'd hit in a month with my normal viewing habits -- this would give me Bulgaria." I paused the film about ten minutes before the end, and then I see on the forum that it's just been listed as Film of the Week, with a note that it would work for the TtW Challenge! So weird.

Anyway, I'm in. I won't be trying to seek out countries for the challenge; I'm just going to see how many I'd hit in a month with my usual viewing habits. I do use some lists (both official and unofficial), but I also watch a lot at random.

Edit: I'm still so weirded out that I forgot to comment on the film: very powerful, with great b&w cinematography.
Top

Yeah I realised I hadn't when I went to bed, I will fix it now.
Top

Great performance from Barbara Hoss as a concentration camp survivor; the ending is particularly good.
Top

Rough watch. I'm sure it's inevitably compared to Hotel Rwanda (2004), as both films focus on historical events during the Rwandan Genocide of 1994, but they're both distinct, and Shooting Dogs goes to places even darker than the other film. If this seems odd for a UK entry, but that's its Country entry for IMDb -- it has a British director and mostly British stars, even if virtually all of it was filmed onsite in Kigali and had real-life survivors of the Rwandan Genocide among the cast and crew.
Top

Thanks! I'm in. MUBI is currently streaming a film from Bhutan if anyone's interested: Honeygiver Among the Dogs. I plan to watch it relatively soon.
Top

allisoncm wrote: ↑December 2nd, 2019, 12:52 am Thanks! I'm in. MUBI is currently streaming a film from Bhutan if anyone's interested: Honeygiver Among the Dogs. I plan to watch it relatively soon.

I'm gonna save my remarks for the icmff pages, but these were all somewhere between OK and very good.

A very dark story about family feuding over oil money in 1970s Iran after they've been resettled. Not a bad film, but (deliberately) very unpleasant.
Top

This is a doc from the new Chile list, and well worth watching. The titular character is a member of the Chilean resistance who was broken under torture and informed on others. The film talks about why she survived, why others didn't, and the scope of disappearances. I knew just enough from school to get a LOT out of this doc, and I'd recommend at least the Wikipedia page for this if you're not familiar.