Goal:
Watch as many films from the Great White North as possible from December 1st, 2018 until December 31st, 2018.


Rules:
- A feature film (Anything 40 minutes or over) counts as one entry.
- A total of 60 minutes of short films count as one entry.
- For TV Series and Mini-Series (40 minute episodes or longer) each episode counts as an entry.
- For TV Series and Mini-Series with shorter episodes, the 60 minute rule applies.
- Rewatches allowed and are good for the soul.
- Try to use your own common sense regarding eligibility and/or ask when in doubt. If it's on any of the lists linked in this post, then it's eligible. If it was nominated for or won a Genie/Gemini/Canadian Screen Award/Etrog, then it's eligible. If it's simply an American movie filmed in Canada, or a Canadian director making an American film, then it's not eligible (unless it meets one of the other criteria).

Stuck for ideas of what to watch? Look no further:

Other lists:
All of the Oscar-nominated NFB films (shorts & features) available online at the NFB site
Top Canadian Films (TIFF 2015)[Runners Up]

You can watch a lot of films online for free at the National Film Board of Canada website. They even have a documentary section to make it easier for those of you chasing doubles this month.

Also Participating in the Documentary Challenge this month? Canada is known for its documentary films. And a number of them are also in the Forum's Top 150 Canadian Films list, thus making for some potential triples.

Bonus Challenge
We already have documentaries on display this month, so the bonus/side challenge for this is to watch a movie from every decade from the 1910s to 2010s. While Canadian cinema started to blossom in the 60s and 70s, really took off internationally in the late 80s and early 90s, and started to receive more critical acclaim in the 00s and 10s, its history goes back over a century. There may not be films from Canada's first 50 years, but the last 100 have given us some gems. I encourage you to seek them out.


I'll update the totals as often as I can, but it may take up to a week between updates due to work, travelling home, and vacation time over the holidays. I'll pull together some stats in January, probably around the 4th or 5th. - Last updated Jan 6th, 7:05 PM GMT+8

Bonus one point for the side challenge to everyone who can identify which film the image is a production still from AND also watches the film for this challenge.

In! Aiming for bronze on the official list.
And if you’re looking for a great Canadian documentary, may I recommend https://www.icheckmovies.com/movies/memorandum/

Thanks for hosting Fergenaprido.
My iCM
Top

albajos wrote: ↑November 28th, 2018, 4:46 pm So are there many canadian doumentaries on forum lists?

Many fascinating themes and ideas come to light here, most notably how it is impossible to ever really "get at the truth" when truth only exists as conflicting memories and testimonies rather than recorded events. There is also an acute bit in which a relative asks Polley what she thinks that her film is going to be about before apologising for "breaking the fourth wall". With everything conveyed through verbal recounts (as opposed to intimate interviews), the film is a little emotionally distanced, but this was a pretty cool first film to watch this month.
Former IMDb message boards user // iCM | IMDb | Letterboxd | My top 750 films // Long live the new flesh!

Nice! I have that disk borrowed from the library.
Top

A triple feature of some Canadian Docs to kick me off:

A competitive bunch we have here, it seems.

I don't know if I will be able to sustain and defend my honour as champion of the True North! 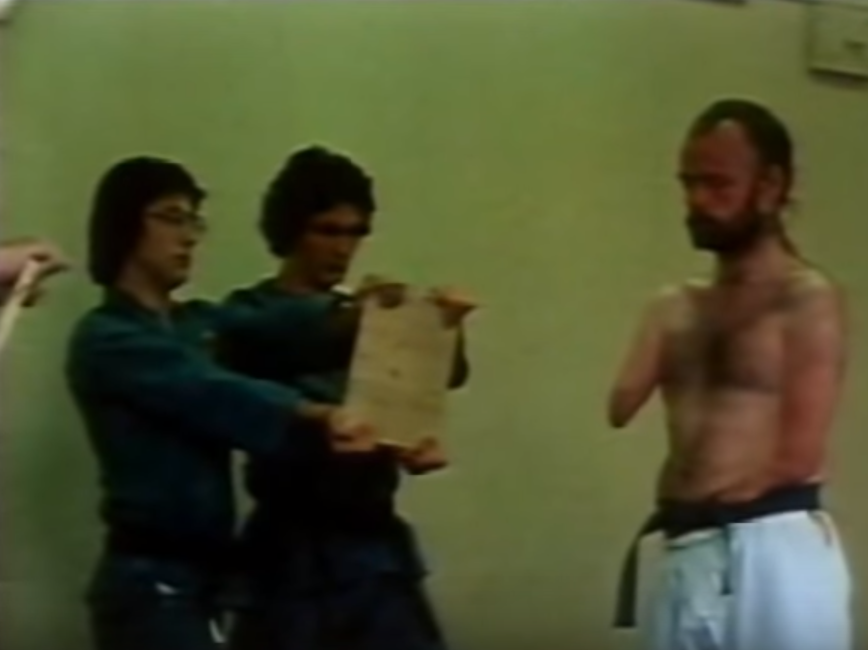 The documentary on physically deformed men and women begins well with distorted video footage of narrator Christopher Plummer who asks us to consider what it would be like to always look like that. His narration is occasionally condescending though as he wows at the film's subjects being people too. The film has some weird theme songs for some subjects too. The interviews themselves though are fascinating, especially with kickboxing man without hands (see above) and it is great to see these individuals in action, one giving a haircut with her feet.
Former IMDb message boards user // iCM | IMDb | Letterboxd | My top 750 films // Long live the new flesh! 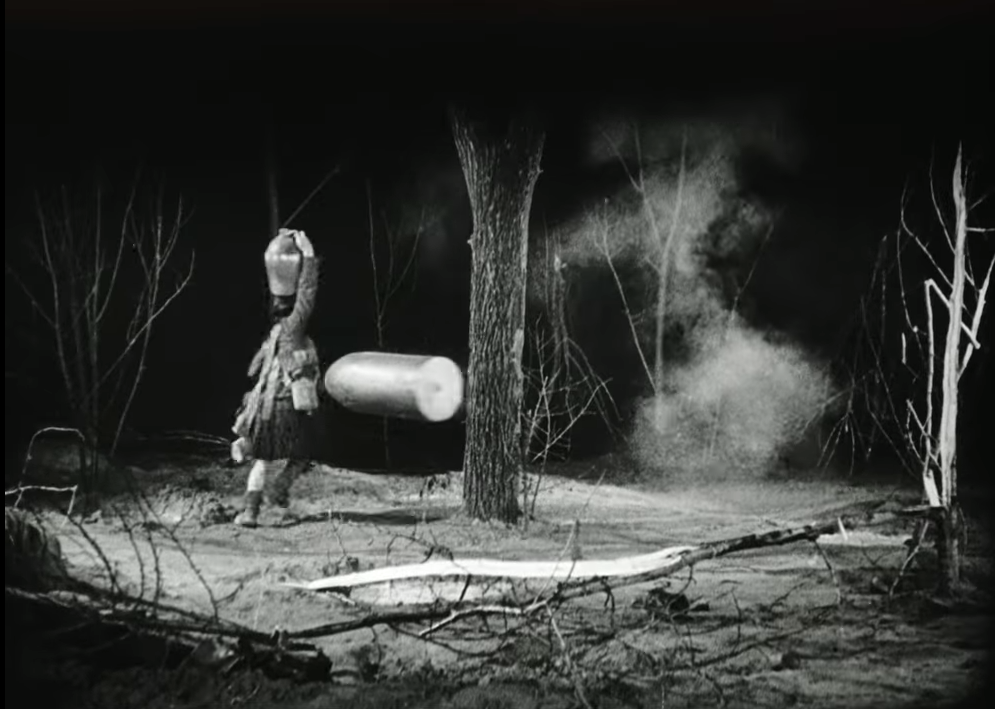 The silent film provides an insight into Canada's role in World War I by focusing on an honorable and hardworking firefighter who enlists out of patriotism and is constantly promoted due to his excellent leadership and intelligence gathering. Sounds okay, but the tone of the film is all over the place. He has a lazy best friend who joins him in service with some wacky comical moments as he falls asleep and imagines giant bullets chasing him (see above) and as he is blown out of a chimney. Some of the dissolve editing and tracking camerawork is quite innovative here though.
Former IMDb message boards user // iCM | IMDb | Letterboxd | My top 750 films // Long live the new flesh!

Twenty dollars says I can drive to Canada faster than you can...

Twenty dollars says I can drive to Canada faster than you can...

You have no idea how fast my underwater car is. Plus, there's no getting stuck at red lights when you travel by sea.

The dialogue in this Canadian heist movie is full of wit with many funny moments of banter throughout. The characters divulge some amusing tales too, like the legend of how the Mona Lisa was stolen. Unfortunately, the ultimate direction of the film is obvious from the get-go as protagonist keeps going on about being angry at his brother, and the film loses much of its zest once it becomes clear what is going on. It is still reasonably amusing fluff though and Jay Baruchel's musical version of Witness would be amazing to actually see.

Opening with a stuffy couple frantically fleeing from unrevealed horrors in the titular tourist attraction, Magaret's Museum gets off to a strong start. Just what could she display that is so sickening and repulsive? The subsequent film flashes back in time and slowly answers that question. With the emphasis on 'slowly'. The film certainly looks nice, shot on-location in picturesque Novia Scotia, and a young Helena Bonham Carter is great, but what is in the museum is simply much more interesting than the over 90 minutes building up to it.
Former IMDb message boards user // iCM | IMDb | Letterboxd | My top 750 films // Long live the new flesh! 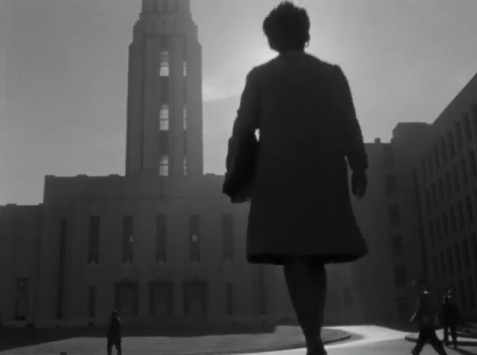 How was that? It's often been almost on my wathclist, but just haven't ever pulled the trigger...
Top

How was that? It's often been almost on my wathclist, but just haven't ever pulled the trigger...

It's not a cinematic masterpiece by any standards but I laughed out loud a lot. I'd recommend this if you don't mind spending an hour and a half on a very funny comedy that doesn't pretend to be anything else.

@jeroeno: Thanks for the info on Goon! I'll try and get to that this month, as it'll be a nice diversion.
Top

In, obviously. Posting my first watch then I'll do the first update right after.

My goals for this challenge are...
- to see at least 12 films (to hit level 12 of the xx/xx award)
- to see at least one film from each decade 1920s-2010s (I've already seen the 1910s one on UNESCO, and haven't been able to find any others online)
- see all available remaining UNESCO films from Canada (Carry On Sergeant, Lest We Forget, and Les dernières fiançailles)
- see at least 10 films from the Top 100 Canadian Films list (and get a silver medal and back into the top 10 in the process; gold and top 5 if I'm really ambitious)
- see at least 1 film from all of the other Canadian lists I follow (22 lists in total)

1. <---> [Back and Forth] (1969) - 2.4 - who knew Michael Snow could make a worse film than Wavelength. I really see very little merit in this (thankfully) short experimental doc. I zoned out after a minute or so, and the last 10 minutes were essentially a static blur for me. {also counts for iCM Forums challenge and documentary challenge}
Top 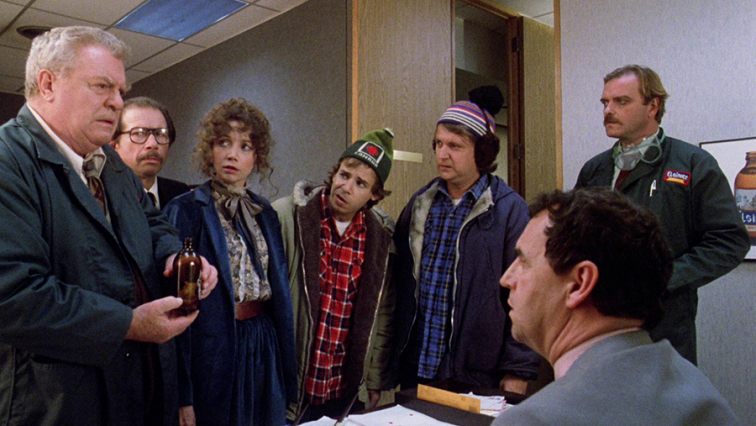 An amusing uncredited adaptation of Shakespeare's Hamlet. The opening seven minutes are a particular stroke of genius with meta elements that bring to mind Hellzapoppin' as the brothers talk about film versus TV as the resolution and aspect ratios change on them, while also subverting the MGM logo and throwing stuff at an audience from a screen that they - Purple Rose style - crawl out of! The film also works equally well as a madcap conspiracy movie spoof with Max von Sydow absolutely relishing his Bond villain type antagonist.
Former IMDb message boards user // iCM | IMDb | Letterboxd | My top 750 films // Long live the new flesh! 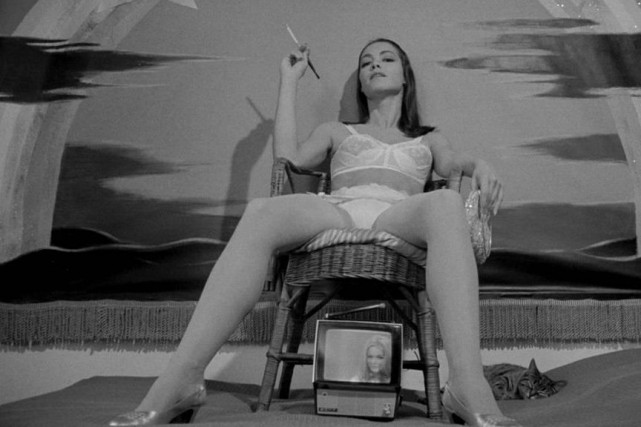