A funny and intense samurai story... Nakadai is great, as always...
Top

That completes my personal Criterion Collection. But I probably should rewatch some of them as many of them are closing in on a 20 year interval.

A couple of Martha Graham filmed ballets. I vastly preferred Night Journey as it was less subtle and with a more enjoyable story to go along with the dancing. I do prefer bigger choreography, and her "A Dancer's World" short was pretty awesome for that.

Technically amazing film with a straightforward and suspenseful plot. And a great slice of 1960s Paris.

A Les Blank doc about Leon Russell and his music. Very underwhelming - I didn't know who Leon Russell was before watching the doc, and I still don't. And as I don't really care about the music aspect, this did nothing for me.
Top 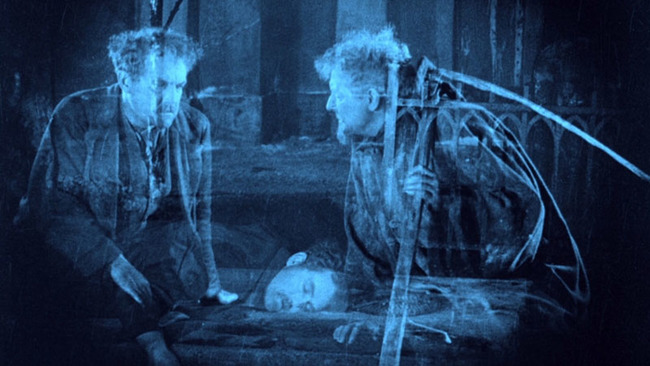 There is much spectacular imagery here for a movie of its vintage with dissolve editing effects used very well to make the titular vehicle ghostly and eerie. There is also a neat bit that prefigures the door chopping scene from The Shining. As a narrative though, The Phantom Carriage never really takes off. The heavy reliance on flashbacks prevents tension from building and this is little more than a Scrooge variant with a bitter man reflecting on his life. It also takes more than a quarter of an hour for anything fantastical to occur.
Former IMDb message boards user // iCM | IMDb | Letterboxd | My top 750 films // Long live the new flesh!

i thought this was hilarious.

After enjoying Shame earlier this month and looking at all the Bergman films I have favourited, I decided to give Wild Strawberries a fresh look. It was probably my first Bergman back in 2003-2004 so I was curious to see if a rewatch would increase my opinion of the film considering it is regarded as one of the best he made. Enjoyed the rewatch, but the ending left me a bit cold. Bit too chipper and positive. No change on rating.

As many others have commented, this is a film that feels well ahead of its time with head-on tackling of racial prejudice. Some strong performances aside though, this is not quite so fresh seven decades later. The only character who with dimension is Linda Darnell as the deceased's wife who slowly changes her own racist views. Richard Widmark is always great at oozing evil, but he has a very one note role - and the same can be said about the righteous Sidney Poitier. The film is atmospherically shot in black and white though and its intent is quite noble.
Former IMDb message boards user // iCM | IMDb | Letterboxd | My top 750 films // Long live the new flesh!

Both the Criterion and Eclipse lists are now completed. Now to check out a few more MoC until the end of the month.
Top

A question about O Sport, ty - mir!: At 1:37, during one of the gymnast routines, anyone else think that sounds like Lalo Schifrin's Danube Incident? It's not quite but it's pretty similar. regardless, it gets the funkybusiness Funktastic Seal of ApprovalTM.
Top

When Les Blank deals with subjects other than music, I tend to like his stuff. But my ratings of his films tend to be inversely related to amount of music in them.
Top

Setsuko Hara is likely my favorite actor of any gender, and has been for some time, but I've still seen only a dozen or so of her many films - in part because there are only a little over 20 that are currently readily attainable with subs. So I parcel them out for when they coincide with a challenge or poll, and here we have a characteristic performance and film made in collaboration with Ozu that is typically excellent though perhaps not on the very highest level. It does seem a bit long at 140 minutes for the fairly simple and, again, typical storyline it presents - unhappily married (with a small child) and separated older daughter Takako (Hara) and younger daughter Akiko (Ineko Arima) help to take care of their father (Chishû Ryû, who else did you think it would be?), with Takako also trying to guide her headstrong sister who is making a lot of mistakes in life - including getting into gambling debt trouble with a local mahjong parlor run by Kisako (Isuzu Yamada) who seems very, very familiar - and in fact might be the women's mother who abandoned the family. The overall direction the film goes in, and the tragic conclusion, are hardly surprising to an Ozu fan, but as usual there are amazing, wonderful moments, like Takako's final scene with Kisako, that give it enormous emotional power. And as great as Hara is, as always, for once she doesn't dominate the film, and I'd have to say that all four actors give roughly equal quality performances, with the standout perhaps being Ineko Arima.

Pretty sure I first saw this around 2006-7 when I was first getting really seriously into noir, and it was time for another go as my memory wasn't that strong, apart from the exciting chase/shootout climax at the end. It's a police procedural with Barry Fitzgerald as the wizened old detective in charge of investigating a young woman's suicide that quickly turns out to be murder instead. Howard Duff is the principal suspect and he's rarely been better, just a weak sleazy lying asshole of a guy who you never really feel could pull the trigger, but could easily be behind the job, but the real star here is the terrific NYC location work: just about every scene and every space in the film is a real location, so we have one of our best views of New York from that era, when such intensive location shooting was still quite uncommon. This does lead to some unfortunately poor sound recording at times and I rather wish I'd watched a copy with subs for some of the sequences in cramped small spaces with too much ambient noise or distortions in the sound mix, and Barry Fitzgerald isn't that easy to understand either for the non-Irish. Producer Mark Hellinger's narration can be kind of droning and dull on occasion, but thankfully as the plot ramps up we hear him less and less.

Probably saw this first 20 years ago or so, and didn't remember it too well - this is true for a great many Wilder films and I really ought to just go through his whole filmography some day. I liked it originally, sure, but I think I had some problems with it - probably wasn't crazy about Jan Sterling, whose hardness is difficult to warm to for sure, and probably found Kirk Douglas' Chuck Tatum too nasty even for my cynical self at the time. No such problems this time, this is one of the great misanthropic films of the 50s, maybe of all time, and Tatum one of the screen's greatest negative protagonists. The last shot is up there among the best and it still packs a jolt even when you know it''s coming. Really nothing to fault here, and I'm not sure I'd put any Wilder film above it except maybe Sunset Blvd.

Swedish cop Stellan Skarsgård is brought in to help on a murder case in a remote northern Norwegian city during the summer, when the sun never sets. He can't sleep (duh! where'd you think the title came from?) and this contributes to an apparent bungling of running down the apparent murderer, which results in his partner getting killed. The setting is certainly interesting, it's nicely shot and compelling enough overall, but I didn't connect that strongly to it either, and this is one of those cases where the moodiness and isolation of the main character probably needed to be dealt with or explained at least a little bit. I saw the Nolan remake of this when it came out and barely remember that, and I suspect in 15-16 years I'll have little or no memory of this either.

Hawks is one of those directors who has about half a dozen films that I love about equally, and while I don't think this one is the most "perfect" (I'd give that to Only Angels Have Wings) it could just be my favorite, and it's probably the one I've watched the most, despite the generally very poor video and tv copies that have been what were available until this recent Criterion release. I saw it in the cinema once also in a Hawks retrospective and I think that was a good copy, and seeing it with an audience was certainly a huge pleasure. But this is a good film to watch at home as well, to better be able to take in all the dialogue which goes by so very fast, and it's good to re-watch also to better appreciate the many small jewels of character parts - I was especially taken this time with Billy Gilbert as Pettibone and I'm getting to like quintessential New Yorker Roscoe Karns (actually from California) more with every film I'm seeing him in. Maybe I'll do a quest. But of course it's the trio of Grant, Russell, and the best rube ever in classic Hollywood, Ralph Bellamy, that provide most of the laughs. Probably one of my 10 favorite classic-era Hollywood comedies.
Top

Even later to this party. 3d or 4th viewing for this - first saw it in a theater when I was in college. I remembered the bare outlines of the plot but hardly any of the surrounding details.

75 - Eureka (Nicolas Roeg, 1983) 6/10
Theresa Russell goes all out to deliver one of the most cringeworthy acting performances in history. I would not force my worst enemy to watch her speech in the last half hour.