Wait - that's really your first time seeing it? What'd you think? I have too many feelings of comfort and nostalgia wrapped up in that film to ever watch it objectively again...

I found it to be much more funny than I expected, although I went into it largely without any expectations. I watched a lot of movies from 1980 to 1986 when I was in school, then watched few from 1987 to 1999, before the DVD player, so I have seen a lot of relatively obscure films, and haven't seen quite a few movies that would cause people to say, "You must have seen it." I'm trying to slowly catch up on that sort of movie-this month Jaws and The Princess Bride, so far.

I'm glad you liked it. It's one of those movies that I rewatch for some reason at least once a year, and often when I'm sick and miserable in bed and want anything that will make me happy even for a few minutes.
Top

I showed my wife the picture on the DVD booklet and asked her who it was. She thought it was Charlie Sheen (holy hell he looks like his dad). I thought this movie was good, but not great. I don't quite see why it's on 20 lists. Martin Sheen was charming, but not quite enough for me. The scenery was fine, but they're flyover states for a reason (I used to make a drive through that country on a regular basis, and always tried to do that section in the dark). I did really enjoy watching this, as I definitely saw a lot of influence on Tarantino, which was a cool connection to make. While I enjoyed this immensely the first time round as merely a series of loosely connected skits and set pieces, this time round I found the distinct sense of a tightly woven narrative. All of Harold's early experiences, after all, paint him as a less than honorable man; one who cheats and pretends to be something he is not, whether it be through buying more expensive jewellery than he can afford or actually pretending to be a store manager. His eventual scaling of the building wall is a true test of his character; there, he still tries to cheat his way out, but as he has to keep climbing higher and higher, he eventually learns to be true to his word. And of course, outside of this, Safety Last! is simply a very funny film.
Former IMDb message boards user // iCM | IMDb | Letterboxd | My top 750 films // Long live the new flesh!

Intense and engrossing crime drama about a man hoping to pull one last bank heist to last a lifetime. Greed gets the better of him though when he demands the bank manager to hand over an extra bag in addition to what is in the vault; unbeknownst to him, the bag contains mafia money and he finds himself in a quite a sticky situation with the mafia after him too. Alongside The Laughing Policeman, this is one of two more 'serious' movies that Walter Matthau made in 1973 and he does a great job here, and it is a quite a versatile performance too as he gets dressed up much like his character in Kotch to rob the bank in disguise early on.

P.S.: Might be time to update the leader board, funky.

I watched my remaining unseen TSPDT movie today. I did not like it too much. I was not particularly surprised, given my previous experience with the director.

If We Shoot All the Pictures What Will We Watch?Show

First of all, major points for the title - I'd have seen it just for that (well, maybe not - I still can't bring myself to watch Jesus Christ Serial Rapist). This is basically a 100-minute harangue of the audience, of the culture, of the 20th century, of capitalism, by the World's Most Arrogant Man, way over the top in it's absolutist Marxist-Anarchist philosophy, ludicrously utopianist while being deeply pessimistic, and perhaps the most overtly anti-cinema work of cinema in existence (unless any of Debord's other films takes the prize). When I read what I've just written I think, how could anybody enjoy this - unless they subscribe fully to Debord's philosophy (which hopefully few do, because it's utterly unworkable and probably would depend on extreme violence). And yet I was engaged throughout and found much of it - entertaining, I guess. "Fun", even. Hilarious, at moments, just because Debord is so full of himself, claiming at multiple points that he is quite literally the only person in the world who understands what needs to be done, who has the right views. And all of this set to images (found footage, documentary film, bits of older mainstream French films, etc) that often - deliberately - have little if anything to do directly with what's being said, though just as often they function as ironic counterpoints. Maybe. In the end I'm not entirely sure what to make of it but it certainly is radically different from anything else I've seen. This comment dedicated to FedRev, wherever he may be.

If you don't actually know this 39-minute short than saying much about it is gonna spoil it so
Spoiler: click to toggleShow
it's basically just a series of shots of killings in a nameless place, of nameless people, by nameless people. Well, they're all men and all white, and if we read a little about the film - or know the town it takes place in from signs and buildings and such (I didn't) then we know it's Belfast, we know it's the time of the Troubles, and we know that this was made precisely so that people watching it would scream ENOUGH! It works.
Puissance de la parole / The Power of Speech (Jean-Luc Godard, 1988) 25 m (1001-2000 list)

Hard to evaluate any Godard - especially video-essay Godard - after just one viewing, but random thoughts are perhaps appropriate for a work filled with chunks of all kinds of music (Dylan, Leonard Cohen and Beethoven stand out), a pair of couples, one trying to share intimate thoughts long distance in today's world and the other given Greek names that aren't really names interacting more physically closely and seeming to exist in the 1930s, both speaking texts from American writers (Poe and James M. Cain). That's the surface but as with all Godard we have to dig a lot deeper and he doesn't help us much. Clearly much of what he's getting at is how words actually do have power outside of their mere utterances, that the language we use to describe the world has a large part in actually creating that world...but beyond that, I'm going to need another viewing. Or ten.
Here's to the fools who dream.
Top

Spoiler: click to toggleShow
1. The Thin Blue Line
2. His Girl Friday
3. A Separation
4a. The House is Black—Iran—Farroukhzad—20 min.
4b. A Diary for Timothy—dir. By Humphrey Jennings—40 min.

I've come to the conclusion that I just don't particularly like Ryan O'Neal. But if we can talk about the cinematography in this, I'm going to make the profound statement that it was pretty good. Above average. Decent. Would receive a passing grade in film school. And thought I was not particularly engaged by the story, that drew me in like few other films did. 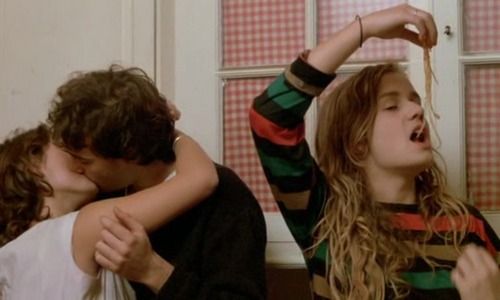 Decent drama about a teenager who turns promiscuous upon coming home from summer camp, how her attitude drives her father insane, how she regrets it when he walks out on them, and the tension that exists as a result between herself and her brother and mother. Sandrine Bonnaire from Vagabond was solid in the lead role, but the actor who impressed me the most here was the guy who played her father. Little did I realise until afterwards that it was Maurice Pialat himself. Bravo.
Former IMDb message boards user // iCM | IMDb | Letterboxd | My top 750 films // Long live the new flesh!

2. Imitation of Life (Sirk, 1959). About as far from West of the Tracks as you can get. Lovely artifice, exquisite direction. I enjoyed it a lot, though I might prefer the original 1934 version.

I'm not usually a big fan of experimental movies, but I liked this one a lot. I suppose the themes and ideas simply appeal to me a lot as a teacher. The whole film is about phoneme / grapheme relationships, how we have come to accept certain letters to stand for certain sounds and how it is also possible to find a random image (unrelated to the sound a letter makes) and, through repetition, make that random image associate with a sound. Whenever the fire popped up, I said X in my head, etc. Pretty cool.
Former IMDb message boards user // iCM | IMDb | Letterboxd | My top 750 films // Long live the new flesh!

Gorgeously photographed with plenty of mobile shots and breathtaking long distance shots. Michel Legrand's music varies sublimely between enchanting and thrilling too. Great as the film looks and sounds, I personally found the protagonist to be a nuisance and could not buy for a second his naivety towards sex. I also felt nothing for the affair between Bates and Christie. There are some glances, but nothing that made me feel like they really loved each other, plus Edward Fox is always so charming. I couldn't see why she would prefer Bates to him. I really wanted to like the film more, not the least because I have a friend who is a big fan of the film (though he seems to have dropped off the planet recently, so I probably have some time to break the news to him) but my personal inability sympathise with any of three main chracters rendered the film inaccessible to me. Sorry.
Former IMDb message boards user // iCM | IMDb | Letterboxd | My top 750 films // Long live the new flesh!

Regarding E.T., I had the chance to rewatch this film while the symphony orchestra played the live John Williams score. It was an amazing experience!
Top