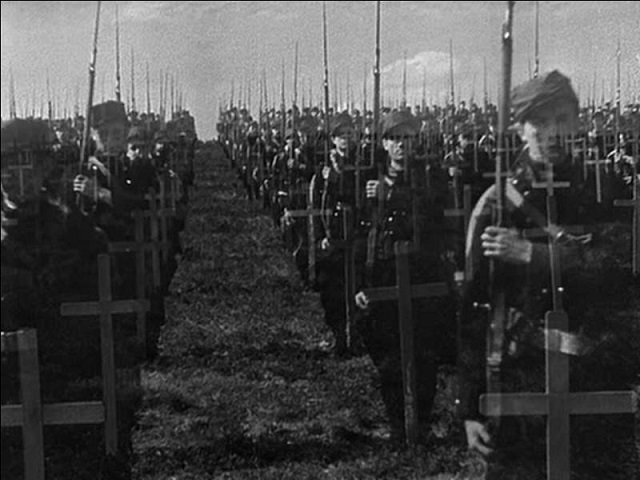 Summary:
The young and patriotic student Demachy joins the French army in 1914 to defend his country. But he and his comrades soon experience the terrifying, endless trench war in Champagne, where more and more wooden crosses have to be erected for this cannon fodder.


Here is a schedule of all the FotWs.
ICM-profile
Fergenaprido: "I find your OCD to be adorable, J"
Top

Great movie. Mostly remember the great cinematography and directing, like in the superimposition posed above and humanistic characters. This is what I wrote after seeing it:
"Although this one is made two decades before it, this reminded my very much of Fuller's Fixed Bayonets in how they both portray how a group of soldiers experience the war in a humane realistic way without going into the ideologies behind their wars."
Top

Don't know if it is only me but I cant see the picture and any of the previous FotW OP pictures anymore.
#JeSuisCharlie Liberté, Liberté chérie !

I can. That's probably the problem discussed a while ago with a simple solution, but I can't remember where it was discussed and what the solution is.

PA knows.
ICM-profile
Fergenaprido: "I find your OCD to be adorable, J"
Top

ICM
March Challenge: None
But at the bottom, the immanent philosopher sees in the entire universe only the deepest longing for absolute annihilation, and it is as if he clearly hears the call that permeates all spheres of heaven: Redemption! Redemption! Death to our life! and the comforting answer: you will all find annihilation and be redeemed!
Top

Not at all like the American remake I saw eight years ago. This is the simplest of war stories. Reinforcements join a French company in the early days of the WWI. They go to the front. After a while, they are relieved and fall back. The pattern repeats several times. That's the whole story. Within that narrative are smaller dramas (the company can hear German miners tunneling beneath their dugout, a poilu tries to get water resupplied while the company is pinned down in a cemetery). The battle scenes themselves are sometimes a bit staged but at other times feel shockingly realistic, to the point where I wondered whether genuine historical footage had been included. Who, after all, was using a handheld camera in 1932? What shines through were the small moments of grace and sadness: The company attends a church service where someone sings Ave Maria while amputees are tended in a nearby ward, a lookout stoically listens to a wounded man trapped in no man's land crying out for help.
Top

hurluberlu wrote: ↑January 26th, 2021, 6:36 pm Don't know if it is only me but I cant see the picture and any of the previous FotW OP pictures anymore.

I commented on that once in WC, it's the same since then

This glorious movie only gets me progress on 1 war list other than the forum list. Unacceptable.
he or A. or Armo or any