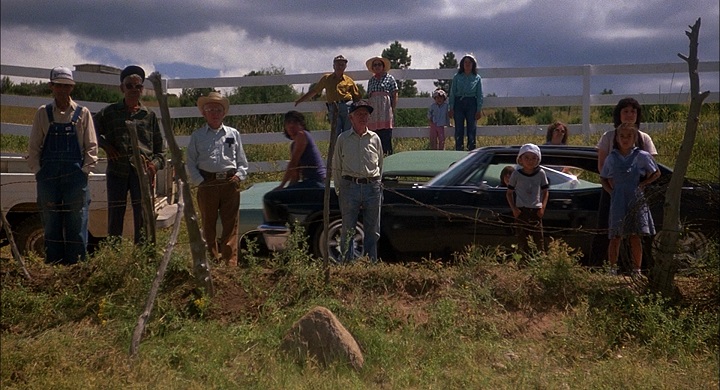 Summary:
An accidental breakdown of a valve on the irrigation ditch launches a hot confrontation between local farmers and corrupt authorities.


Here is a schedule of all the FotWs.

This movie fits the current 1000<400 Challenge.
ICM-profile
Fergenaprido: "I find your OCD to be adorable, J"
Top

Milagro, New Mexico. A poor village located amongst picturesque mountains, few job prospects and laidback locals. Bigshot land developers want to build a golf resort and lots of condos for rich people to move in, but one poor farmer kicks a water valve which diverts privately-owned water onto his beanfield. The authorities are reluctant to get involved with the land dispute, not wanting to stir up a hornet's nest that could jeopardise the golf resort, but the warnings and threats escalate until they're forced to take action.

Quite a slow-moving film with lots of time spent on the quirky residents and their individual stories: old man Amarante talks to an imaginary angel; Joe Mondragon is the married farmer with 3 kids desperate for work, not wanting to move "up north for $2 a day" like his dad; Marv from "Home Alone" turns up as a sociology student to help out Joe, John Heard (also from "Home Alone") plays an ex-lawyer/writer who explains to the rest of the town what'll happen if the golf resort goes ahead. Despite the overarching "evil rich vs good poor" narrative, some of the small-town politics are adequately explored, but the seriousness of irrigating the beanfield isn't felt until the 2nd half of the film, by that point the sense of emergency has vanished. Some of the fantasy elements didn't feel like magical realism to me, the main actors are uneven compared to the supporting cast (Christopher Walken is the best actor in the whole thing). More of a quirky comedy than a social commentary that shows off the beauty of New Mexico but the storyline doesn't create the necessary urgency for the land dispute plot. More of a Milagro Beanfield Dispute than a War.
Top

This was pretty good. A classic western with the ol’ good vs evil, rich vs poor story. With amazing scenery. New Mexico is so beautiful.

A drama about a land dispute, simmering with class and ethnic tensions, set in a small town, featuring an ensemble cast. This isn't a Redford movie; it's a John Sayles movie. Only about half as good.
Top

Surprising btw how a movie by Robert Redford with lots of well known faces is so underseen.
ICM-profile
Fergenaprido: "I find your OCD to be adorable, J"
Top
Post Reply
5 posts • Page 1 of 1