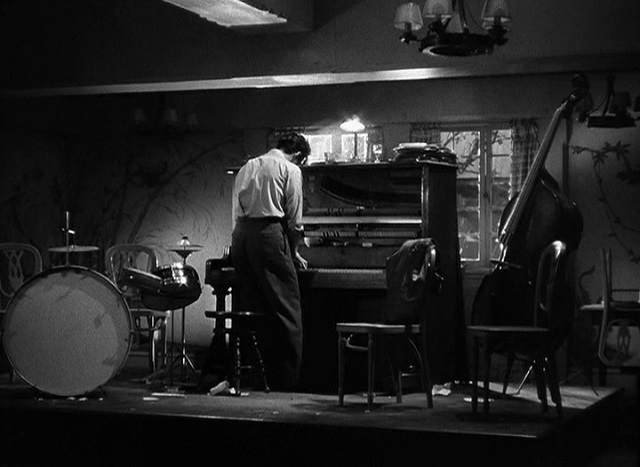 Summary:
"Jigger' Lane forms a band that includes singer Ginger 'Character' Powell, wife of the trumpeter Leo Powell, and Nickie Haroyen and Peppi. All of them dedicate themselves to work as a unit and to play 'blues' music. The dedication isn't paying off in money and, while riding the rails in a boxcar, they meet and befriend a gangster named Del Davis. The film starts as the kind of jaunty musical Bing Crosby might do, (and did do with Birth of the Blues). Then our gang of musicians - inc. Priscilla Lane (Arsenic and Old Lace), Jack Carson and Elia Kazan - arrive at a dive called The Jungle, where many of the classic Noir elements are waiting, including Lloyd Nolan. This may be his best performance, and yet it's not the most memorable acting in the film.

"I'd slap you in the mouth if I thought it would do you any good."


That's Nolan on the left. His character here is just as likely to slap you as pat you on the back. He's your best friend... so long as he likes you. He doesn't have the imposing look of the gangster greats (Cagney and Robinson) but he's just as good with mixing charm and menace. He keeps you on your toes and whichever way he bends, believe me he means it. Sometimes, he even threatens with a barely suppressed chuckle, like being told by your closest pal that he won't hesitate throwing you off a cliff.

On the right is Betty Field, playing a 2nd rate singer and a 1st rate femme fatale. Field is an apple-cheeked, trashy version of Ann Sheridan. In classic femme style she knows exactly how far she can bend a man without breaking them. She knows when to play hurt and when to attack. There's the underlying motivation of the one thing she wants and can't have, which is why she goes after everything else in sight.

This is happier and more musical than pure Noir - the band have a joyful chemistry - but it definitely hangs out on the dark side of the street so that near the end, there's nobody who I comfortably felt was going to get away safe.
Rating: ★ ★ ★ ½
Top

I enjoyed the film but it's not Anatole Litvak's best work. The film goes downhill somewhere in the second half and definitely near the ending. There didn't seem to be any onscreen chemistry between Jigger and the femme fatale Kay. Out of the other below 400 checks films of Anatole Litvak I've seen, I'd recommend The Journey (1959) and Out of the Fog (1941), plus maybe City for Conquest (1940), Goodbye Again (1961), and The Amazing Dr. Clitterhouse (1938).
Top

I've seen over a dozen by Litvak and recommend...
1. Blues in the Night
2. The Amazing Dr. Clitterhouse
3. Out of the Fog
4. City For Conquest
5. The Snake Pit
6. Castle on the Hudson
7. All This, and Heaven Too

I have not seen The Journey or Goodbye Again yet.
Top

The story is underdeveloped and the acting is sub-optimal. However, it is quite enjoyable and the noir musical element is noteworthy. There are some stylistic flourishes, e.g. the editing composed of superimpositions depicting Jigger's "madness", that secures it a solid 6/10 in my book.
Top 300 | RYM | Letterboxd

What can I say, I didn't hate it and rather enjoyed the musical numbers?
Listen, Daddy. Teacher says, 'every time a car alarm bleeps, into heaven a demon sneaks.'
sol can find me here
Top

Dolwphin wrote: ↑
November 19th, 2020, 10:43 pm
There are some stylistic flourishes, e.g. the editing composed of superimpositions depicting Jigger's "madness", that secures it a solid 6/10 in my book.

I read Don Siegel crafted those sequences. He's credited for the montages, listed as an editing credit but no confirmation if he designed and/or shot them too.
Top
Post Reply
7 posts • Page 1 of 1