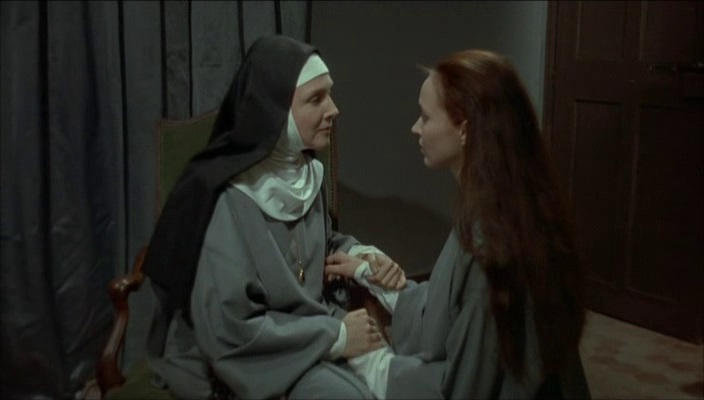 Summary:
Suzanne is forced against her will to take vows as a nun and three mothers superior treat her in radically different ways. Suzanne's virtue brings disaster to everyone in this faithful adaptation of a bitter attack on religious abuses.

Ooh one I've actually seen not that long ago and can discuss - here's my review from my last viewing, at the Wisconsin Film Fest in April 2019:


The new 4K restoration certainly captures the colors well - I had seen this three times before I think, twice in 35mm and once on VHS, all in the 1990s, and I don't recall the colors being so vibrant - and the sound is terrific, Jean-Claude Eloy's dissonant score mixing well with the enhanced natural sounds, birds and wind and dogs etc, that confront Suzanne incessantly as she tries to find ways to deal with her fate as a nun without a vocation, though not without a feeling for God; the only real issue I had is that the image seemed *just* a little softer than I remembered, softer than such a hard story calls for. Rivette is one of my favorite directors and I basically love just about all of his films, and this is certainly in the top half, but ranking becomes rather silly for me beyond that. Rivette, like Eric Rohmer, set nearly all of his features in the modern day, but the few exceptions that each made are striking, and this perhaps the most special in my mind. Anna Karina gives the best performance I've seen from her, indeed one of the best performances by anyone in the New Wave catalog, as Suzanne, forced to take orders because her parents have squandered their money and can't marry her off or do anything else with her, and she goes from one type of Hell to another under three different Mother Superiors, before finally attempting to escape and finding life just as problematic on the outside. Certainly a damnation of the Church as a hierarchical, autocratic institution, and no surprise that it took some time for the film to get cleared to be seen (for adults only) in France. Well at least it got a release there, here in the USA it only showed at retrospectives in big cities and undoubtedly it won't play even as widely now as it did in the 90s or earlier. Beyond the religious elements it's really as much an indictment of the behavior of the powerful of all kinds towards the powerless, and Rivette's somewhat distant, detached mise en scene, coupled with the eerie music and the constant sense of implacable fate make this the only film in his canon that might be compared in any meaningful way with Bresson.
Top

Wasn't a huge fan of this one, only gave it a 7.2/10, with the best part being the acting. I may revisit it at a later date, though (especially since I think it's been restored since I saw it).

This was actually a film that my French teacher showed us in university (I think it was our 17th century French Literature class). I was sick or something and missed the class she played it in, so to help me catch up, she invited me to KG so that I could grab the film and watch it before the final exam. This was back in October 2007, before old and foreign films became more readily available through streaming services (or even available at all if you didn't live in a major city). I didn't manage to see the film in time (I might have even dropped or failed the class, I don't remember), but when I joined the forum in 2014 and someone helped me reactivate my KG account a few months later, it was one of the first films I acquired, and I watched it shortly thereafter in April 2015.

So, not necessarily a great or memorable film for me on it's own, but it's one that holds a cherished place in my journey as a cinephile that I'll never forget. Plus, she was my favourite professor at university, and thinking of this film reminds me of her.
Top

Fergenaprido wrote: ↑
September 30th, 2020, 11:11 am
I was sick or something and missed the class she played it in, so to help me catch up, she invited me to KG so that I could grab the film and watch it before the final exam.