Yesterday I rewatched Rapture for the first time since seeing it on PdA's recommendation years ago. I loved it even more. Last week however, I caught an earlier an even more ignored and overlooked Guillermin film, Thunderstorm, made even before Guillermin's breakthrough.

I think these two films give us a glimpse into what kind of artist John Guillermin could have been if he had not gone to Hollywood, or rather, what kind of artist he indeed was, and I wanted to share a few comparisons I thought were really fascinating and may move a few of you to seek out this earlier work. 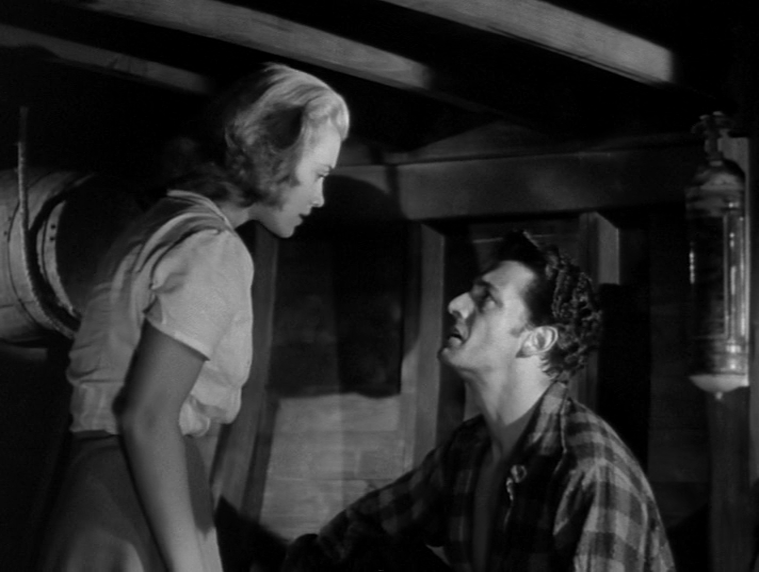 1. Both films are set in quiet seaside towns, with cliffs and a turbulent sea. Interestingly both films are also set abroad, but shot in English: Rapture being set in France and Thunderstorm being set in Spain. Guillermin shot on location, and both times using a native cinematographer.

2. While Thunderstorm is unfortunately not shot in cinemascope, which adds even more tension and beauty to Rapture, both films create strong tension from their visuals (something we also see from him in Guns at Batasi). If Thunderstorm had been shot in cinemascope it might have been almost like looking at the same film - though not quite as creative it is a clear precursor.

3. Both films feature a female lead, with the people around her attempting to control her.

Yes, magic - likely not real magic, actually - clearly not real magic, but this is the most fascinating connection between both films - a clearly false, but still ever-present element of the supernatural. In Rapture, Agnes (Patricia Gozzi) believes she sees her scarecrow become a real man (he is a fugitive) and believes she made him and has a claim on him. In Thunderstorm, Maria (Linda Christian)believes she is cursed and that the effects of her presence reeks havoc on all that cares for her - and reality certainly seems inclined to support her belief.

I just think it is so endlessly fascinating that both films introduce the potential supernatural angle, and while they essentially make it clear in every way they can that it is not real, it still weighs heavy on the film, and that microscopic glimmer of thought/probability is there - while we must also face a lead that believes it is true.

Thunderstorm in itself is surprisingly great. I went in with quite low expectations, and only on the recommendation of Sol and Adam, who also pointed out that Roger was fan - and I have to say I agree completely with all - this is a wonderful little gem that appears completely hidden. At the moment it rests on 6 checks, all from the forum, and all but Roger in the last 2 weeks. I really think this could be another forum mini-discovery.

The plot is more familiar than that of Rapture. We are in a poor fisherman's village ran by the one rich man employing all to do his bidding on starvation wages. One day they find a beautiful woman floating on a boat all by herself, and the men start to become infatuated by her and try to claim her for their own. What is fascinating is that unlike so many similar films blame is not placed on the woman (though the town blames her and Maria blames herself. You get tension between the men and Maria, between the men themselves, between the town and Maria, between the workers and their boss and between all and the sea.

I really think any fan of Rapture should give it a try.
Top

This is a wonderful recommendation for a great hidden gem that I can easily see as a future 500<400 entry. I love the comparisons you make between the two films as the similar themes that they deal with make them fascinating companion pieces even if they were made nearly ten years apart.

I have also been enjoying exploring Guillermin's back catalogue and Thunderstorm stands out (along with Guns at Batasi) as a highlight of his early career, coming close to the magic of Rapture in parts.

I would encourage anyone intrigued by this post to seek out Thunderstorm as it is a fascinating obscurity that deserves to be more well known.
Talking Images Podcast
Letterboxd Blogger ICheckMovies
Top

Thunderstorm will be high up in my 500<400 list this year. A great hidden gem. I loved the tension and the atmosphere. The way in which the main character is able to cause so much disruption in the town without actually doing anything. In fact, I'd say the rest of the town causes the disruption rather than her.

Definitely recommend it. I was the second person to check it (after Roger) and we're now up to seven (all forumers so far). Most have given it a positive review. Check it out if you get a chance.
Talking Images, the iCM forum podcast
iCM forum Twitter page
iCM forum Letterboxd page

Both were ok, but Rapture suffered from poor performances by the French actors and both films suffered from a lack of tension. Both looked good but Thunderstorm was by far the stronger production and the more beautiful thanks to taking advantage of the location and emotive close-ups (particularly as the actors were all very good). I didn't experience much atmosphere or tension in Thunderstorm which is what really let it down for me because there was a lot of potential for it but it felt very middling and bland. Both were interesting thematically, but never quite followed through enough with these ideas to be anything more than 'just good'.
"I do not always know what I want, but I do know what I don't want." - Stanley Kubrick