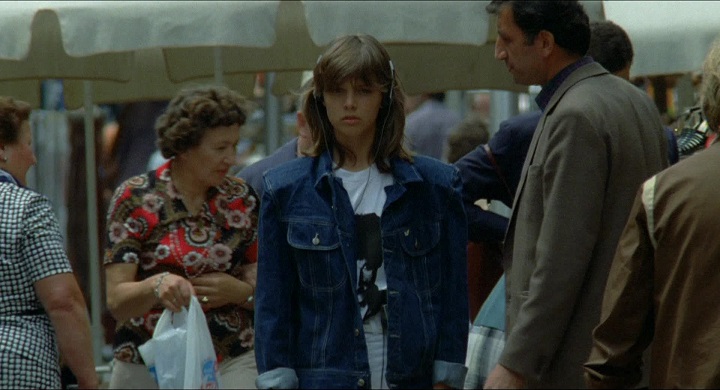 Wow. I just typed about 3 paragraphs since this is one of my favs and the board refreshed itself and wham! gone. Bummer. I have no desire to retype all of that.
Oh well. I'll try again later since I had intended to rewatch this one anyhow.
Top

I think this is the first time in the history of the FotW that a new one has been started before I watched the previous one.
ICM-profile
Fergenaprido: "I find your OCD to be adorable, J"
Top

I have this one on VHS.
Top

Rewatched it last night as a matter of fact. The short version of what I was writing when I lost the post was that this film gets across a decent amount of emotion and tension with very little "effort". It's a minimalist film in some ways and it's pretty streamlined in terms of visual style, etc. the music is fantastic (like all of Schmidt's films I've seen so far) and forms an integral part of the story. Nosbusch is excellent in the lead: it's why the movie works so well for me. She's able to convey that emotion and the stress of obsession without any elaborate drama. And she's the absolute focus of the film; she's in just about every shot and, for most of the first third of the film she is really just wandering around, but it competely enages me for some reason. I am glued every time I watch this and I've seen it four times now.

At some point I might dissect some of the more surreal sequences (like the scene with the girls by the river, the "dream/nightmare" in the car, or the lipstick on the mail carrier's face). These are some of the aspects I haven't seen discussed in blogs or analyses I've read so far.
Top

I didn't look at the genre tags before watching so I was a bit taken by surprise by the last 20 minutes and its change in tone (especially compared to the first half of the film). At the same time, the tone stays consistent on a higher level in the film's minimalist approach.

I'd surely like to hear your thoughts on the 'weird' sequences and details you mentioned, peeptoad. I agree about Désirée Nosbusch's performance being one of the things (besides the ending) that is going to be the most memorable part for me.

As an interesting side note, Nosbusch was herself a Teenie star at that time, being a (co-)host for several shows. (And she had already had an unpleasant encounter with Klaus Kinski who molested her. While preparing for an interview with Kinski, he locked her into his house in the woods from which she had to flee via the balcony). Also, she was born in 1965 if you want to do the maths.
Top

Glad you liked it, Melvelet! Going in blind is probably the best way to view this one actually. I knew beforehand that it was a horror, and a slow burn at that so I was more prepared.
(Incidentally if you haven't seen 13 Tzameti that's another that excellent going in blind. Completely diff type of film though)

One other thing I didn't mention before has to do with the transition (the last 20 minutes you refer to)- Aside from that there are items in certain shots that probably have meaning, but are not the main focus of the shot: e.g. paintings on the wall that Simone examines when they first get to the flat. I'll rewatch this again at some point and check those more closely.

The other scenes I mentioned:
first one is the lipstick on the mail carrier . This is the scene when she leaves class and runs home to check the mail (at a time of day she normally would not) and they confront each other. Nothing is said, but I think this might be significant somehow. Based on the opening scene the mail carrier (and other postal workers) seem a mused and unsympathetic to Simone and are, for her, the nemesis. They get worked into the paranoia pretty easily and are obvious targets for some of the delusion.

The nightmare/dream in the car might just be an extension of Simone's fantasy state. There is obvious angst mixed in with the fantasy and this might just be a more surreal visual tied to that. Not sure if the pink flashing lights mean anything there...

I'm going to rewatch a couple of these scenes before I post more (also I am at work taking a break and have a meeting now). Lost of subtlety with meaning in this film. It begs me to watch again.
Top

Just watched the film and I edited the OP to add a spoiler tag because certain things don't happen until much later in the film.

I like the film. I heard of the film years before as a result of it being on some horror lists. Although the amount of horror in the film is definitely below the expectation I was assuming, but the style of the film was similar enough to what I was expecting.
Top

What was the point of the two naked girls at the river when she just arrived in Berlin? Felt like some completely unnecessary nudity to me.
ICM-profile
Fergenaprido: "I find your OCD to be adorable, J"
Top

joachimt wrote: ↑August 24th, 2020, 8:34 pm What was the point of the two naked girls at the river when she just arrived in Berlin? Felt like some completely unnecessary nudity to me.

That's the one sequence I still can't quite figure. The fact that it occurs at the tail end of a daydream sequence makes its placement more confusing or harder to interpret imo.
Top

This was one of the eighties movies I wouldn't want to have postponed for long. Thanks for voting for it. It's hardly on any static lists, just 2 in fact and both I didnt even know about.
9-
he or A. or Armo or any