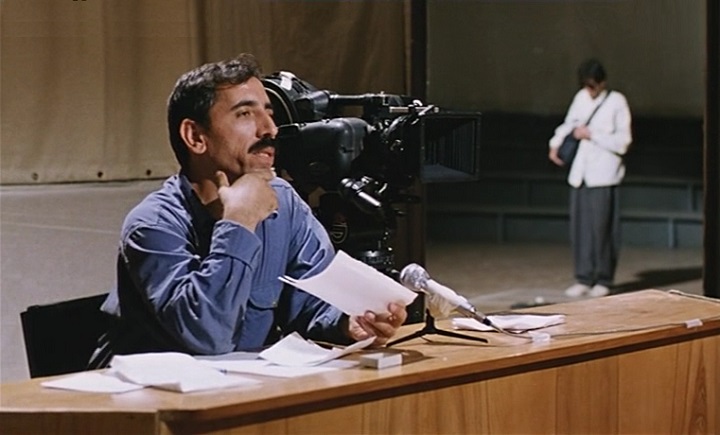 Summary:
Makhmalbaf puts an advertisement in the papers calling for an open casting for his next movie. However when hundreds of people show up, he decides to make a movie about the casting and the screen tests of the would-be actors.

The power of democracy!

The power of democracy!

I'm 5 movies down on perfect run after a slump in movie watching.

As for the subject, I remember some of this docu. Good show.

I saw it when it was relatively new during a near-complete Makhmalbaf retro, don't really remember it that well though I liked it a lot at the time, and liked most of his films from the 90s a lot. I might re-watch it this month.
Top

This might be the first time I've seen the FotW before it was presented...

I watched this a year ago during the Middle East challenge. Fascinating look at normal people wanting normal things, like to be in a movie. It was a great form of people watching, getting to see shyness and brazen goofiness and tons more. The people auditioning were clearly the best part.

I found it lazy conceptually, though. The "movie about people auditioning for a movie" is too simple and uninteresting for me.
Top

Saw this one last year for the challenges and poll. I quite liked it, and it was more interesting than I thought it would be. I don't seem to have written any thought back then, but I remember being slightly perturbed by the director's behaviour, and then increasingly intrigued as the film wore on. The dynamics between the casting panel and the auditonees was quite fascinating at times. I didn't find it lazy conceptually at all; I thought it shed some light on an oft ignored process, or one where you usually only see it from the perspective of the struggling actor instead of the man with the power.

I gave it a 7.6/10, enough to make the bottom of most of my submissions for polls it would qualify for.
Top

There were some amusing parts (love the guy who thinks he looks like Schwarzenegger), but overall I found this deeply tiresome. I know that there's something here about power, art, creative teamwork, the process of filmmaking, subjectivity, and oh my god I don't care.
Top

Mohsen Makhmalbaf comes off as a huge jerk throughout parts of this film. He redeems himself a little bit near the end, but he's still a jerk overall. I don't like the guy after watching this and it makes me not want to watch any of his other films.
Top
Post Reply
8 posts • Page 1 of 1