I'm going to India next month, for the first time, and would like to watch some Indian films as I've only seen a few. However I'd really like them to be realistic/grounded/slice-of-life, rather than the spectacle and melodrama associated with Indian cinema. No Satyajit Ray recommendations, please, as I'm obviously aware of his stuff, but anything else in that style would be great. I suppose I'm particularly interested in 21st century stuff, if possible, but not exclusively. Non-Indian films that are shot in India and capture the culture would also be welcome. Documentaries good too.

Dil Se... by Mani Ratnam comes to mind, as the characters in that movie travel a lot in the beginning.
Gangs of Wasseypur, by Anurag Kashyap, is also interesting as it covers a large part of indian history : it's a godfather-like plot, but it extends on 4 generations, and there is a lot of historical depiction (the use of musical and cinematographical references certainly plays a big part in that era depiction).
A last suggestion would be Swades, We the people, which kind of shows how Indian cinema likes to describe a "typical indian village"...

Anything by Mani Kaul or Ritwik Ghatak
Ship of Theseus

These come immediately to mind. I also really like a film called Baishey Shravana (Mrinal Sen, 1960), and Sen's another good director to watch, but the copy I saw was absolutely terrible in quality, so I hesitate to recommend it to others unless they get a better copy than mine.

Anything by Shyam Benegal, especially Manthan (1976)
And Uski Roti and Pyaasa ofc.
Enjoy your trip flaiky.
My iCM
Top

There's Gandu, by Qaushiq Mukherjee. It should be readily available on Netflix. Not your traditional slice of life cinema, but quite modern and unlike any stereotypical ideas of Indian/arthouse cinema you might have. There are also a few other Mukherjee films on Netflix, The Land of Cards is my favorite but it's anything but realistic/grounded (also unlike anything Bollywood, but still).
My film review archive

cool recommendation! haven't seen anything from him yet, and I'm brand new to Netflix… so, that is working out well!
Top

Luck in your trip flaiky!, i haven't seen much from India, but i would really like to do so, too bad there's no Indian challenge this year, anyway a movie that sounds exactly what you're looking for is one of the World cup representant for india, Thithi (2015) a great movie about life in a small village, with some great characters, other movies that i love from India that could fit in what you are looking for, are, Kummatty (1979) wich is a great fairy tale, yet again set in a small village, and the documentary Jai Bhim Comrade (2011) about Bombay's lower castes struggle for liberation from caste and class opression
Top

Big thanks to everyone so far, there are definitely a few here that I'd like to check out.

Ee.Ma.Yau. (2018) also sounds very much like what I'm looking for. Has anyone seen that?

It looks like this one is set in Tibet...but that's always a great setting, so watchlist'd anyway 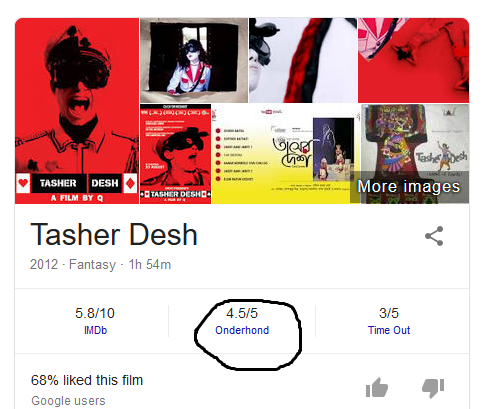 Wooaah, Google considers you an authority on this film.

I don't have much to add but I just want to say I envy anybody getting to eat Indian food - my absolute hands-down nothing-else-is-close favorite cuisine - in India. If my travel horizons ever open up it will be a priority for the food alone.
Top

I think my name is there too when you look for "The Tenants Downstairs".
My film review archive

Mani Kaul is easily one of my fav directors.
Top

OldAle1 wrote: ↑
January 2nd, 2019, 6:35 pm
I don't have much to add but I just want to say I envy anybody getting to eat Indian food - my absolute hands-down nothing-else-is-close favorite cuisine - in India. If my travel horizons ever open up it will be a priority for the food alone.

(A couple of these do involve minimal song and dance)

OldAle1 wrote: ↑
January 2nd, 2019, 6:35 pm
I don't have much to add but I just want to say I envy anybody getting to eat Indian food - my absolute hands-down nothing-else-is-close favorite cuisine - in India. If my travel horizons ever open up it will be a priority for the food alone.

Oh yes, same, I cannot wait for the food (inevitable Delhi Belly and all!)

yeah be careful. i can't eat indian food at all now. lentils and the smell of cumin set me right off

what part of india are you visiting. i was in the north about 10 years ago. would like to visit the south one day too

recommendations pretty much covered above and i like bollywood so...

Yeah, the North: we're doing this tour plus our own excursion to Jaipur at the start. I'd like to see the south too, but I've already been to Sri Lanka and the north will feel more different...plus, after the tour we can [plane] hop over to Nepal. Hopefully another time!
Let the ashes fly
ICM | Letterboxd | All-time stats
Top

oh neat! have a blast. the trains are fun!! we were supposed to visit bhutan too but got snowed out. hope you'll have better luck