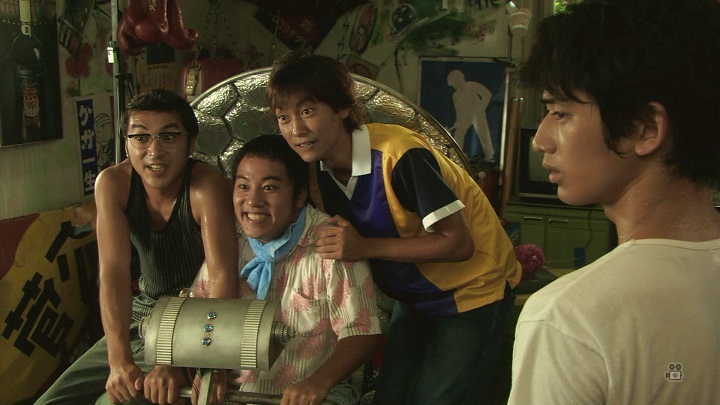 Summary:
A sci-fi club concocts a plan to repair a remote by using a time machine that suddenly appears.

Here is a schedule of all the FotWs.
ICM-profile
Fergenaprido: "I find your OCD to be adorable, J"
Top

Not gonna add to my list, but it was pretty fun. I liked the dynamic of the group especially, and seeing it all pan out. 7/10
ICM
January Challenge: None
But at the bottom, the immanent philosopher sees in the entire universe only the deepest longing for absolute annihilation, and it is as if he clearly hears the call that permeates all spheres of heaven: Redemption! Redemption! Death to our life! and the comforting answer: you will all find annihilation and be redeemed!
Top

I could have sworn that this was a previous FOTW.
Top

I think it was a World Cup movie, maybe.
Top

I think it was a World Cup movie, maybe.

None. I haven't seen it yet and I have seen every FotW and WC movie.
ICM-profile
Fergenaprido: "I find your OCD to be adorable, J"
Top

Out of all the movies I’ve seen on this list, STMB is the worst. I fail to see why someone would find this good or even tolerable. I remember feeling exhausted after watching it and not in a good way. At least with La région centrale and LA plays itself and other movies that I dislike (on the 500<400 list) I can see a reason why others might like it. Here? None!
1/10

(Sorry for the negativity. I normally keep my mouth shut when disliking things other are fond of. Just wanted to actually post in the FotW for a change, especially now when Cocoa left. I do not want this project to die.)
My iCM
Top

Thanks for lowering my expectations.

Sorry about that. I’m 100 percent sure that you’ll like it more than me though.

I remember it was a rather goofy film, so, "not for everyone".
Top

Yes it is goofy but fun IMO.

It is a film about time travel that does not take itself too seriously, but is nevertheless internally consistent insofar as these things go. I personally found it entertaining.

FWIW this is available to stream on Amazon Prime (Japan).
Top

Goofy and fun indeed.
If you've seen One Cut of the Dead and liked it, this one goes in a similar direction, although yep, Summer Time Machine Blues is more goofy.
Current recommendation: In Fabric (2018)

Melvelet wrote: ↑January 13th, 2021, 12:46 pm Goofy and fun indeed.
If you've seen One Cut of the Dead and liked it, this one goes in a similar direction, although yep, Summer Time Machine Blues is more goofy.

I loved One Cut of the Dead.

Melvelet wrote: ↑January 13th, 2021, 12:46 pm Goofy and fun indeed.
If you've seen One Cut of the Dead and liked it, this one goes in a similar direction, although yep, Summer Time Machine Blues is more goofy.

I loved One Cut of the Dead.

I loved One Cut of the Dead, too. STMB was ok...lightweight, fun, goofy. Not a favorite, or one I'd champion widely, but I've seen soooooooooooo much worse.

You know what ... I guess I'll watch this one too. I've avoided it long enough. Not a big One Cut of the Dead fan (I liked it, but the hype is uncalled for), but we'll see where this goes.

3.0* - A cute variation on the usual time travel mumbo jumbo. It's not often you see these narratives executed as straight comedies, but Motohiro finds plenty to make fun of in the back and forth between timelines. It actually beats some of the more serious films handling the same sort of material. A sci-fi club in a small, rural town is struggling with the summer heat. When the remote of their AC dies and a time machine materializes out of nowhere, they plan to go back a day and steal the remote from their former selves. Things get more complicated when a professor explains to them that they have upset the spacetime continuum, jeopardizing everyone's future. Motohiro's direction is light and breezy, there are some good gags and the film has that rural summery vibe, which is always a plus. The performances are a bit loud/over-the-top though, which isn't my favorite type of comedy. A deadpan version of this film would've no doubt been a lot better, but Summer Time Machine Blues was better than expected and delivers some solid entertainment.

Why it's popular here I really don't know though. It's not a terrible film, but it's not that remarkable either. It feels like I've seen this type of thing countless times before, often better too. As for the One Cut of the Dead analogy, I get why it's made but I don't really agree with it, as One Cut really goes for the surprise while this film makes it clear from the very first scenes what is going on, so you know what's coming in the second half of the film. Not bad, but how this is a 500<400 film is completely beyond me.

Onderhond wrote: ↑January 14th, 2021, 8:26 am It feels like I've seen this type of thing countless times before, often better too.

Can you give a few examples?
Top

Don't want to use this as an argument to force people to enjoy this movie more retroactively (it's pointless), but mind that this weird crazy Japanese comedy thingy might have appeared fresher in 2005 than in 2021.
Top

It depends what defines the film for you of course. For me it's part of the Japanese "school club dramedies" niche (including films like Linda, Linda, Linda, Swing Girls, Hula Girls, Water Boys, The Kirishima Thing and no doubt plenty of others I'm forgetting right now. None of these films are about time travel though, none of them are this focused on comedy either, so your mileage may vary

Edit: the comedy reminded me a little too much of this guy. I guess you could add Robot Contest to that list too then

Torgo wrote: ↑January 15th, 2021, 5:10 pm Don't want to use this as an argument to force people to enjoy this movie more retroactively (it's pointless), but mind that this weird crazy Japanese comedy thingy might have appeared fresher in 2005 than in 2021.

I wonder. 2004 brought us Japanese comedies like Survive Style 5+, Taste of Tea and Kamikaze Girls. I doubt this film would've felt incredibly fresh and crazy after that. The years before we had films like Party 7, Monday, The Happiness of The Katakuris and Battlefield Baseball. This feels .. quite safe and normal I think. But yeah, if you missed all that I guess it's definitely goofier that the average comedy.

It's the style of comedy that I liked. I've seen Linda, Linda, Linda, Swing Girls, Hula Girls, but like you say, they're less comedy-focused. I also liked the school setting.

I think Survive Style 5+ and Kamikaze Girls are better comparisons. I like both, but Summer Time Machine Blues is my favorite of the three. I also like The Taste of Tea, but I think that's a different style.

Thanks for the recommendations. Monday was already on my watchlist, but I haven't gotten around to watching it yet.
Top

Edit: as for Monday, I would put that closer to Taste of Tea than the other ones I mentioned.

Fun here and there, very silly, but also annoying, but I kinda enjoyed it. 6/10
ICM-profile
Fergenaprido: "I find your OCD to be adorable, J"
Top