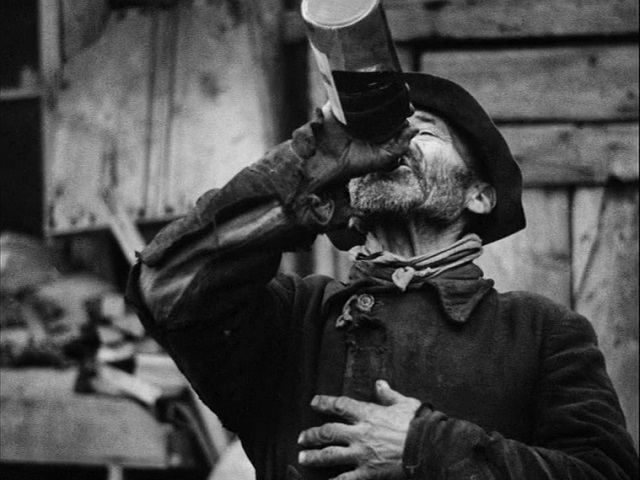 Summary:
Pictures of the Old World is an unquestioned masterpiece of European documentary cinema, with existential radicalism that offers a contrast to the shallowness of hundreds of other documentary films showing images from the outskirts of civilization. The outskirts here are a Slovakian town in the Tatra Mountains. Though censored for 17 years, Dusan Hanáks poetic visual essay is not a political or even social film. It goes to far deeper and more fundamental levels of human experience. Inspired by the photographs of Martin Martinek, the films power lies in its unusual portraits of people whose raw visual beauty radiates from their very souls. Some, like the village cosmos aficionado or the disabled old man who climbs stairs on his knees, are hard to forget.

Sounds way up my alley! Is it available anywhere other than invite-only sites?
Top

Saw it almost exactly a year ago, but I don't remember anything from it. Not bad, but not great either. I gave it a 6.8, which is slightly below average for me. It's relatively short, though, so I think it's still worth viewing.
Top

Despite some tender and profound moments, a little underwhelming. I'm not crazy about the quickly-flipped-scrapbook style, which gives it the feeling of a preview for a great, very long film; as it is I feel I have some sense of the inhabitants of this old world but only intriguing glimpses of the place itself. I don't know if it's the (lack of) context or how they're filmed, but many of these little tableaus -- eg a cat slinking out of its door, then its owner walking out of his, with three chickens following him onto the threshold -- feel like they should have some poetic appeal, but end up feeling just pedestrian, which is maybe part of the point. There are some amazing shots though: a cow with blinders, a glowing graveyard, sheep in the forest, and a makeshift bagpipe performance on a misty field are among the highlights. I love the omnipresence of animals and the recurring presence of folk music. The classical score, on the other hand, feels a bit overstated for the otherwise detached, gritty style, as do some of the dubbed-in sound effects. There's also a bizarre detour into space exploration inspired by one interview, especially out of place given the film's otherwise excessive tightness, maybe to comment on the backwardness of progress or to contrast old and new worlds. Anyhow I'm left with more questions than answers, but it's a solid piece of fragmentary documentary art that probably influenced a number of films I like more. Wish this rip had had better subtitles too, if only to learn what's credited to Jan Svankmajer.
Top

prodigalgodson wrote: ↑June 27th, 2020, 9:35 amWish this rip had had better subtitles too, if only to learn what's credited to Jan Svankmajer.

The copy I have has rather good subtitles in 8 languages, including for all of the credits. I just checked and Svankmajer is only credited with a number of other people as "Collaborator" or "Cooperator", depending on your preferred translation.
Top

prodigalgodson wrote: ↑June 27th, 2020, 9:35 amWish this rip had had better subtitles too, if only to learn what's credited to Jan Svankmajer.

The copy I have has rather good subtitles in 8 languages, including for all of the credits. I just checked and Svankmajer is only credited with a number of other people as "Collaborator" or "Cooperator", depending on your preferred translation.

Ah nice, thanks for the info!
Top

I really enjoyed this, even though I wouldn't normally say this is my type of movie. There were just so many arresting images and snippets of narration/dialogue.
Top
Post Reply
7 posts • Page 1 of 1