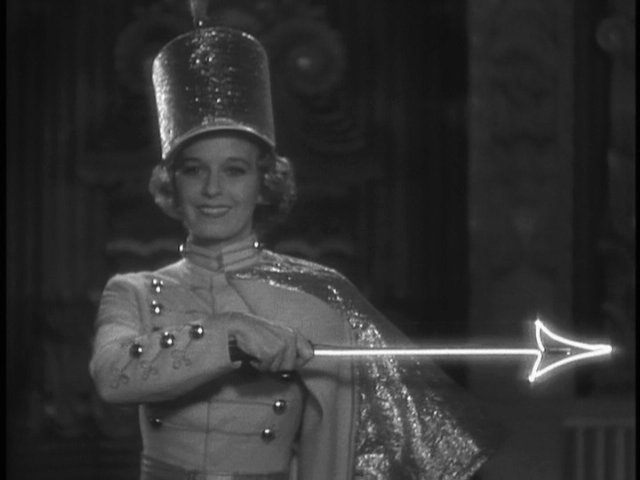 Summary:
A naive girl just out of a cloistered orphanage finds that being a 'good fairy' to strangers makes life awfully complicated.

I just finished watching this on Youtube. Don't let the Spanish fool you, it's the right film. Enjoyable, funny, well-written, and I thought the pacing good -- the 97 minutes went by quite easily. The one nit I'm willing to pick is the continuity person seemed to be asleep during some of the coverage shots, but that's really a minor point. Once we get past the basic premise - a young, naive girl who has lived in an orphanage is warned that she can't be too careful in her dealings with the male gender - it's light and I was interested to see where it would go. And while the heroine's trouble is Hays office approved and not quite what we expect, it's still fun to see how things will resolve.

The ending was a bit abrupt but overall it's well put together. I'll give it 7 stars.
Top

Just watched this and thought it was horrible. I don't know whether I hated Margaret Sullavan's character, whether I hated her acting, or both. Her character's constant lying, followed by a pattern of her whining about unlikely situations that she caused through her lying, was painful to watch. Even her celebrating was frustrating to watch. She wasn't the only annoying character, but her constant whining was like nails on a chalkboard. The script is terrible. We get a few early scenes of Margaret Sullavan working as an usher for a movie theater and then no scenes or even small references to her still working there. Same with the character's living arrangement. We are constantly reminded that she used to live in an asylum/orphanage, but then it's implied that she is forced to live elsewhere once offered the job, and then there is one scene of her leaving/getting off work which implies that she's going home only to end up in a different situation as a result of her interaction with a man, so does the character even still has a job and a place to live throughout the film... it's incredibly weird how she has time to snoop two men like a detective and routinely be at the places they're at to interact with them while she should realistically have a job and also time (and a place) to sleep. If her character does all the things she does on screen and still works her job, then does she even sleep? Also, if she still has a job throughout the film, it's hard to imagine her not getting into other shenanigans, which would make the point that there would be more job scenes if she still has a job.

It was also frustrating to watch her character go back to visit a man who previously scared her because he looked violent whenever angry. The relationship was like a domestic abuse victim returning to their partner (even though she had already told him she was married and there was no logical reason to continue the relationship).
Top

I'm partly with Cocoa. I agree with him on the girl. She couldn't stop whining, so she got on my nerves. The men were okay though and there were some funny moments. 6/10
ICM-profile
Fergenaprido: "I find your OCD to be adorable, J"
Top

Could this be the earliest movie to mention vegetarianism? Unfortunately they shrug it off (and then go on about their favorite fur too). Might as well watch a racist movie next. Any ideas?
https://www.imdb.com/search/keyword/?ke ... 910%2C1940