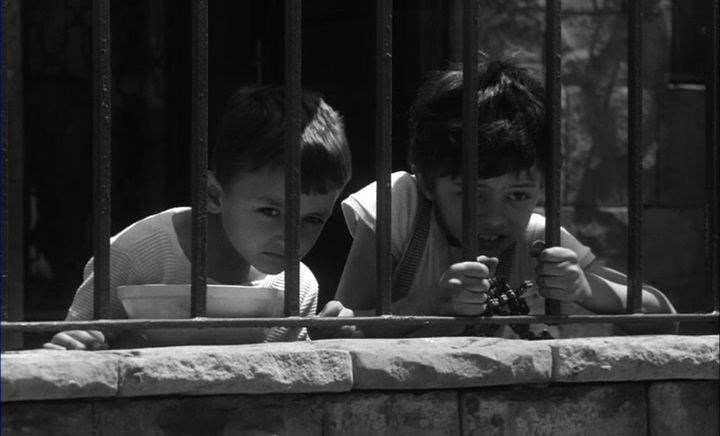 Summary:
Impersonating a knight is one of the favorite games of nine-year-old protagonist. Now as Don Quixote, now as D'Artagnan he is fighting evil, he is searching for justice and defending the weak. Together with his friends, packed in cardboard armor, they play all day long. As he is playing, however, he unwittingly witnesses the relation between his parents and gradually comes to understand that the world of the adults is far removed from the canons of knightly honor. His parents love him, but never seem to find the time to listen to his concerns. The deceit, corruption and luck of respect in his own family alienate the small boy. The only adult, whom the boy trusts, is his uncle to whom he is attached by a genuine, equal, man-to-man friendship. He takes him to the cinema and theater performances and talks to him like with his peer. Will this sensitive kid ever succeed in building an internal armor against selfishness and rudeness?

This is the first World Cup film to be a film of the week during my time hosting FotW. (This isn't the first ever WC film being a FotW as there were multiple WC films as FotW during joachimt's hosting.)

There aren't a lot of films from the Balkans that are eligible for FotW that aren't either a WC film or a co-production. Most of the films that are eligible are mostly 1000<400 films. If you include Greece as a country from that region, then we already had the most voted for film that also fits this challenge last week with Istoria mias kalpikis liras (1955). Some websites include Greece and a portion of Turkey as part of the Balkans and a bunch of websites don't include them.I didn't include Greece in my initial search, but I did so today and there were only four Greek films not including the film we did last week with three of those four films being past WC films iirc, and the highest film out of those only received one vote and was also a WC film on the 1000<400 list so it didn't matter lol.
Top

I quite enjoyed this film when I saw it for the WC.


Fergenaprido wrote: ↑May 13th, 2018, 6:30 pmRitzar bez bronya (Knight Without Armor) - perhaps the most pleasant surprise of the three, because it was absolutely not what I expected. The father character was irritating, but thankfully he didn't play a big role after the first third. That kid, though... I got so much enjoyment watching how he reacted to everything. A good gem from an underrepresented country; sad that the film's rating has dropped a bit on imdb since the match started.

I watched this movie at the beginning of last month thanks to Nathan Treadway I my Facebook challenge. Unfortunately I only gave the movie a 5/10 and here is part of the review i left in my thread.

I had no problem with the acting or the production, all were done pretty well, my problem is that not much really progressed with the movie. The way it was set up was more like an anthology, a few different scenarios that Vanyo found himself but they barely connect together. Then their was so many questions unanswered at the end of each section and there seemed to be no real growth from what Vanyo learned. Maybe a rewatch is in order in the future to catch what I may have missed.
Top

Cute film iirc. I liked the film, but I didn't necessary loved it.
Top

A pleasant movie, though it felt a bit slack dramatically. The true appeal is the authenticity it brings to the child's actions, games, friends, and thoughts.