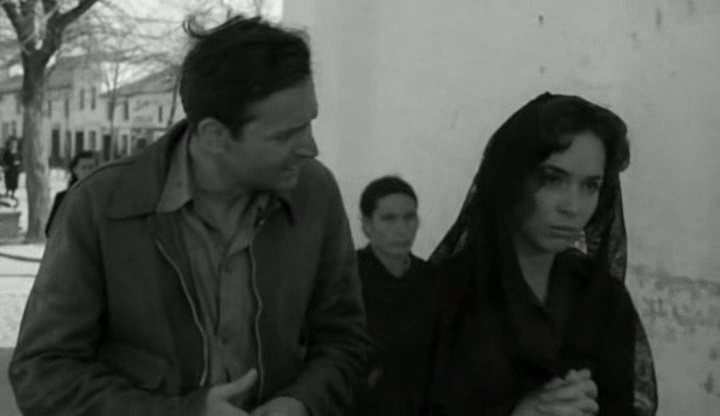 Summary:
A wealthy businessman attempts to run to Mexico to escape capture for embezzlement. On the way, he switches identities for a visa but that only complicates matters.

This fits next month's 1000<400 challenge if anyone wants to wait a few days before watching it. Three out of the other four films on the January schedule are also 1000<400 films.
Top

Not really sure what to say. First off, not knowing anything about the story besides the title, I didn't find the 'Mexican' exteriors very convincing: it looked too much like a cute Spanish village to me and the agaves were way too wilted. Just didn't look anything like the border I knew. (Hint: the flora was all wrong)

Second, could Steiger's character been any less sympathetic? I get this is something of the point, but other than his relationship with Dolores (besides being a name, means "pains" in Spanish), it's not easy to care much for this guy or his plight. I also find his German ancestry intriguing: why especially did he have to be German (though granted this was made a little over a decade after the capitulation of the Nazi state)?

And then there's money: his, theirs, and that which other characters covet and what they'll do for it. It's rather easy to root for those getting rich from a proper soaking.

A reasonable thriller that is well-constructed and paced if one can get past the unsympathetic lead (and those around him). Given that this was made for the UK market, most viewers probably won't notice or care about the unconvincing exteriors, but lacking a compelling story, I could only go for 7 stars.
Top

Here's what I wrote when I saw it for the noir challenge:

There are noirs that feature suave leading men and beautiful women, sharp dialogue and witty one-liners, elegant suits and slinky dresses. I love these movies. And then there are noirs that are focused on moral turpitude, low motives, the degrading and humiliating aspects of human nature and human actions. This tradition owes a lot to pulp, and I love these movies too.

The categories sometimes overlap, but Across the Bridge definitely belongs to the latter. It feels almost like a Jim Thompson novel, although it's based on a story by Graham Greene. There may be only one positive character in the whole movie, and she's a minor figure. Everyone else is venal. Rod Steiger, full of tics and fury, carries the movie.
Top

I first saw this on Norwegian TV ca 1970. What sticks with me is the radical stripping the Steiger character undergoes - he's lost one thing after another and has nothing left but the dog who follows him despite multiple shooings -- and then the scene in the desert....

8/10
ICM-profile
Fergenaprido: "I find your OCD to be adorable, J"
Top

The ending of this film just seemed so out of character that it ruined the entire film for me.
Top

Yeah, I get what you are saying about the ending. It certainly wasn't my favorite part of the film, but clearly there was an artistic statement being made. And as 3eyes put it, it's about the character being stripped of all artifice ... do extraordinary circumstances change people's behavior?

Also makes me wonder if those who prefer character study to character arc might react differently to this film. They certainly aren't mutually exclusive, but if one prefers a good character study, it makes sense that the ending seems oddly out character. But as character arcs go, this is one downward trajectory and he's caught in a trap of his own making, no?
Top
Post Reply
8 posts • Page 1 of 1