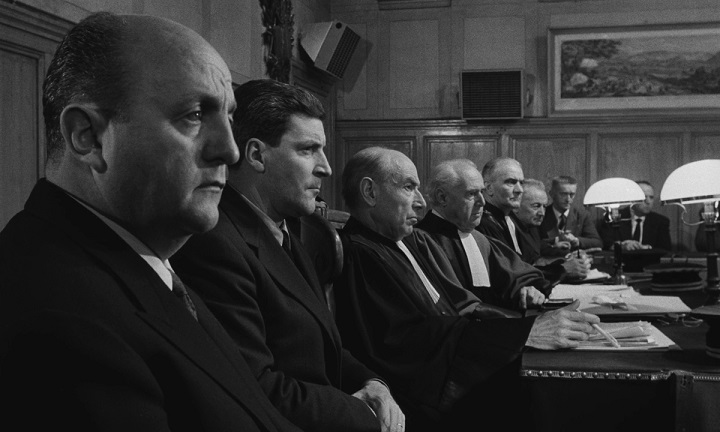 Summary:
In a moment of madness a respectable pharmacist Unable to take in what he has done, he flees from the scene of the crime and behaves as if nothing has happened.


Here is a schedule of all the FotW
Top

Watched it last month. The opening scene was superb.
A strong 8/10.
My iCM
Top

This was excellent. I got the impression that I was watching something pretty special just a few minutes in and it didn't disappoint. A gripping storyline and some sublime camerawork - watch out for a spellbinding reflective shot as the protagonist gazes into a glass. I hit the favourite button and will add to my 500<400 noms for next year.

Four of my last five favourites have been French films, I think I need to take this into consideration when prioritising films from my watchlist.
Talking Images Podcast
Letterboxd Blogger ICheckMovies
Top

Found this one a bit troubling - and not in an entirely good way. First off we have a bucolic opening sequence with an equally bucolic rendition of Vivaldi's Four Seasons: Summer concerto. Then, off camera, is an argument. Were not meant to find firm footing here. Why?

Initially I found being in the protagonist's POV annoying if for no other reason than I found it somewhat hard to accept him doing what what he was doing. But clearly that was needed to set up the rest of the film, for better or worse, and I got over it so to speak.

But then there's a shot where he's mulling over what he's done and his recollections of a woman. Wasn't it the morning after? And yet the trees above the characters are devoid of foliage. Summer isn't summer? Or is this about mood? The lack of something?

Found the trial interesting, as is often the case, less for what actually happens and more for seeing something quite different than what we expect in a trial in the US. While there are mechanisms for jurors to ask questions, it's nothing like is portrayed in this film. Very fascinating. (And I'm inclined to accept the film's veracity: didn't get the feeling of Hollywood mendacity here.)

But it's the third act that pacts the punches and holds a few. I'm still not sure what to think. First thought was that ours is not the only time to struggle with "what is truth?" Clearly. But there seemed to be something more than just the facts as presented, something the filmmaker(s) wanted to say, about truth, in France a mere two decades after, when French citizens and their German neighbors were living with what they had done, what they had accepted, what they had hid, what they denied. Or as Shakespeare put it more eloquently:


Out damned spot! Out I say!—One, two. Why, then, ’tis time to do ’t. Hell is murky!—Fie, my lord, fie! A soldier, and afeard? What need we fear who knows it, when none can call our power to account?—Yet who would have thought the old man to have had so much blood in him.

Beautifully shot, as I read on another box cover years ago, "in glorious black and white." This choice, while possibly financial, seems to add a starkness and creates opportunities like the aforementioned reflection in a drink glass. The artistry is omnipresent and worthy of respect. Acting and design all work well, but there's just something about the story that doesn't entirely sit right with me after a first viewing. Gave it 8 out of 10.
Top

I understand the problems sol has with the pov of this movie. I too was wondering at first if we were supposed to sympathize with him or something like that. His action was presented as some kind of accident or at least his thoughts made it seem like that. It felt a bit unreal. On the other hand I do suppose things like this can happen and than it's an interesting question how someone deals with it in his head. I never sympathized with him, but I thought it was interesting to follow his doubts and troubles. The result was a black comedy to me, especially the way things went in the final part of the movie.

We all agree this is beautifully shot, do we? I especially loved the way perspective was used to give depths to the shots.

9/10
ICM-profile
Fergenaprido: "I find your OCD to be adorable, J"
Top

Yes, beautifully shot, but, um, I don't see any posts by sol.
Top

I loved the photography in this, and agree that the opening sequence was brilliant. However for me the pacing was a little inconsistent--long meandering conversations in bars, for example, that did not reinforce the narrative in a Chokovian sense. Despite this I liked the psychological aspects and the way the director used the church bells to highlight the unraveling of Duval's mental stability.
Top

Whoops, I meant you.

I'm planning to watch this today or tomorrow, but I noticed that the file I got from 72aicm is 104 minutes, and imdb lists the movie as 90 minutes. That seems like more of a discrepancy than a slightly different frame rate can explain. Any ideas?
Top

no, but I watched the file shared by 72aicm
Top

blocho wrote: ↑December 14th, 2019, 11:18 pm I'm planning to watch this today or tomorrow, but I noticed that the file I got from 72aicm is 104 minutes, and imdb lists the movie as 90 minutes. That seems like more of a discrepancy than a slightly different frame rate can explain. Any ideas?

Dunno, but the blu-ray is 104 min long. Took a look and the shortest version I could find on the web was 100m. A slightly tighter edit would’ve improved the film imo, but I guess the IMDb’s runtime is wrong.
(I have no idea how long the cinema release was though.)
My iCM
Top

I felt a bit disappointed. The plot (a killer is placed on the jury for the man who is wrongfully accused of his crime) is something straight out of American noir, and it feels somewhat akin to The Big Clock. The movie depends entirely on the character of the pharmacist, and we're privileged with an interior monologue that helps us to understand him. And that is where things went awry. For all its fine qualities, this movie didn't deliver a convincing portrait of the protagonist.
Top
Post Reply
12 posts • Page 1 of 1