I have no idea how Wheeler got re-elected. He's unpopular (so I thought) among Portlanders of all stripes. Guess he has a lot of "shy" supporters.
Top

sebby wrote: ↑November 6th, 2020, 8:18 am I have no idea how Wheeler got re-elected. He's unpopular (so I thought) among Portlanders of all stripes. Guess he has a lot of "shy" supporters.

Anarchistnews.org tries to answer the existential quandry of "WHY WE BREAK ALL THE WINDOWS". I've struggled with the logic and this is one place I actually read and recommend reading the comments. Also, this is the first I've run across this website - not sure of the quality, but since anarchist generally refuse to talk with other media, it's impossible to get a feeling for what they are thinking.

In keeping with themes presented in the link above^, it appears anarchists hit the Mexican consulate in Portland tonight (among other places) in the city.

Totally seems like there are just good and bad people on both sides!
Top

well, they both seem to like to burn things: one side like garbage cans and piles of carboard; the other, churches.

I don't understand why you fail to see the equivalency!

This is one of the best articles I've seen in terms of really addressing the protests in Portland and how they have morphed.
In America’s whitest city, Black activists struggle to separate themselves from anarchists
Top

More than six months later, the long promised NYC Department of Investigation report on the protests and police riots of May/June is out. I've just spent the last two hours reading the entire report. For those who quite reasonably don't want to read such a long document, here's an effective summary. There are some problems (it consistently uses terms like "excessive enforcement" instead of "police brutality" or "criminal assault), but the report is excellent for the most part. It is highly damning of the NYPD, which is surprising only to the extent that a city agency is willing to publicly criticize the city's largest criminal gang.

Notably, Mayor De Blasio released a mealy-mouthed, rambling statement in response that did a lot of deflecting and blame-shifting. But he did admit two things: He messed up and the police messed up. Given that he's spent the past six months describing the NYPD's performance during its weeklong fit of rage as excellent work, I guess that's progress.

All that being said, this is just a report. It matters only to the extent it influences the public. What's most important are the upcoming mayoral and city council elections. They are the only route to real reform.
Top

blocho wrote: ↑December 19th, 2020, 3:28 am What's most important are the upcoming mayoral and city council elections. They are the only route to real reform.

You got to hand it to the NYPD. They really don't understand irony.

Things have been relatively quiet though now that spring's coming ... the weekend was busy with a myriad of protesting activity over the weekend in Portland, so I expect this is the beginning of another unpleasant summer protest season. Yes, if you missed it, it got kinda ugly with the PPD 'ketteling' everyone at the protest and someone from PPD on record saying something to the effect that everyone there had committed some criminal act. However, of the over 100 ketteled - all of whom had to have their name and birthdate written on tape which had to be applied to their chest for photographs, only about 10% actually ended up being arrested and the number charged always goes down from there.

Another sore spot - in the defund wave of early summer, Portland finally acted to remove a small fraction of funding for certain controversial programs, one of which was the gun violence team. Of course gun violence has seen a surge like the rest of the country, so now the Mayor (who runs the police in Portland's unusual bureau system) wants to refund and reconstitute such a group. IDK how I feel as I see issues all around the table on this one, but one thing I've got no trouble saying - the defund movement is currently stalled. I never expected it to actually do much and so was probably more successful than I expected but it appears the pendulum is heading towards "re-fund" less than a year later. I've not seen any actual evidence that the most ballyhooed promises to defund, Minneapolis and Seattle, are actually going anywhere. Could it be because 'the establishment' and the 'center' just aren't convinced there is a way forward without police? Still, Portland finally got a street team up and running that will respond to mental health calls (and I believe they're also tasked with some nuisance complaints related to homeless campers): if nothing else, this is a good sign.

The horror of the young man shot just north of the Columbia River in Washington state continues to unfold with a judge now under fire for his hot mic bias slip. Everything about this case pisses me off.

But it's not just the cops: the whole criminal justice system needs to be cleansed.
Top

I agree completely. Politicians have almost completely jumped ship on the police reform movement (I far prefer that term over the "defund movement"). It hangs on only in certain cities (like NYC) where politicians still think there's enthusiasm for it among the electorate. But even here, most of the current mayoral candidates are paying lip service -- they all talk about reforming criminal justice, but they rely on empty platitudes. Where they make specific promises, it's always for policies that are minor or impossible to implement through city government. It's just too easy for politicians to opt for the status quo.

Given that we've seen increases in police funding (often to increase "community policing") and widespread legislative proposals to limit the rights of protestors or even legalize attacks on protestors (Florida), I think this era in the police reform movement may ultimately be a net negative. At least on a national level. I'm still hopeful that some local governments may make progress. Take this story. A year ago, this incident would have been swept under the rug. Even now, I'm flabbergasted that there were actual consequences for police brutality. It can only be the result of constant public pressure. Police leadership will almost never do the right thing when it comes to holding cops accountable, but they may make concessions like this to handle the pressure.
Top

Yes, it does seem that certain jurisdictions are more willing to listen to citizens when there is widespread polling data supporting reform. (I used the term "defund" loosely to match current rhetoric and set it apart from the never-ending promise of change and improvement that never seems to come - but we're essentially talking the same thing at this point.) I'm still disheartened every time I see a grand jury passing on filing charges since I know this is when the system isn't working. But the bright spot - if we can look at it that way - is many more cops have actually faced internal justice (like in the article you linked) than I ever remember. Maybe it's just getting headlines. Maybe something has finally started to change. Does it matter as long as bad cops are held accountable for their horrible actions? Maybe, maybe, someday we'll get to a place where they face murder charges: I'm afraid that's what it will take. 34 shots at a fleeing suspect for a low-level drug sting? Clearly most of America considered that acceptable 20 years ago. Hell, maybe even two. That's definitely changing.

And then there's the mess the London Met has landed itself in. Talk about stupid!
Top

@blocho (and any lurkers): you might get a kick out of this latest policing scandal. Short story, someone called to report that a city commissioner (guess what race) hit her and fled. The president of police association released that information publicly. After minimal investigation, the police have ruled out the commissioner as a suspect and the president of the union has resigned and there are calls for a wider investigation.
Top

Interesting story. The head of one of the NYPD unions did this a few years ago and received no punishment. He's currently under investigation for illegally releasing the arrest record (including home address and other personal details) of the mayor's daughter within hours of her being arrested during a protest last summer.

I consider myself a staunch union supporter, but I increasingly think that the police has to be treated like the military in certain areas. Members of the military do not have the right to form a union and they cannot publicly participate in political campaigning. Those are severe restrictions, but they make sense because we need the most powerful armed organization in the world to remain non-partisan and under the control of elected officials. The same should be true of the police.
Top

well, when I read about the Duante Wright shooting yesterday I pretty much knew, "here we go again."

Things got ugly both last night (Sunday) and tonight (Monday). The police are responding much more robustly now though the current plan seems to stop the property damage by basically pushing protestors back. That's what I'm reading, but will have to see what people are writing about it tomorrow. I'm guessing it's going to be a very long, miserable dry season.

There has been some movement to change policing in the current legislative session - we'll just have to wait and see what the sausage factory ends up producing. It seemed relatively hopeful as "baby steps". But one step backward, the gang interdiction team that Portland cancelled last year in response to the BLM movement is being reintroduced as gun violence team. No word how many of the former members will be tasked to the team. They also don't have anything like their old budget, at least initially, and a good bit of funding has been dedicated to policing alternatives. So that feels like two steps forward, one step back, but then again, gun violence has been a real problem like most larger cities. I've not seen any breakdown though on how much of that is gang related and please note, this isn't a racial issue in my mind - we have Black, Latino, Asian, Aryan, and other gangs so it's absolutely "all of the above" in my mind, but we don't know how this team will see it. There has also been an increase in domestic violence, so I'm not clear if that will be part of their mandate as well or what, but the announcement came with a warning that will will mean less response to all the other things police are supposed to do. My only hope is that the alternatives to police start ramping up.
Top 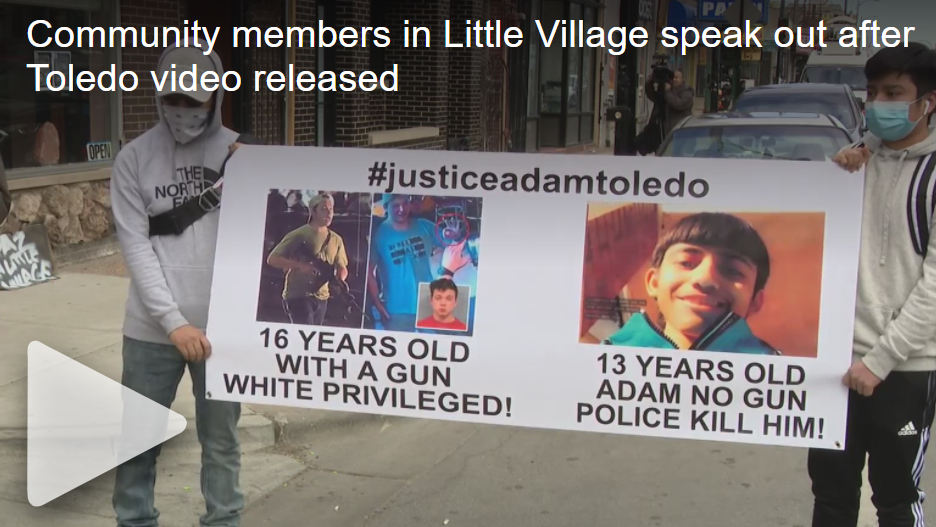 just did a screencap of the video placeholder (or whatever it's really called) since it speaks volumes, at least to me.