Thanks for hosting, shugs.

15. The Hanging Tree (1959)
A strong town Western, with Gary Cooper as the doctor who comes to a mining camp, carrying a strong gun hand, talent at the poker table, and a dark past. For that setup and because the impetus for the plot is the survivor of an Indian attack on a stagecoach, it reminded me of Deadwood to the extent that I suspect that there was a strong influence. Good supporting turns by Karl Malden and a crazed George C. Scott in his first movie role.

16. The Great Northfield Minnesota Raid (1972)
This is the sixth movie I've seen about the James-Younger gang, and I don't think any among them were very good (I'm not counting A Time for Dying in which Jesse James randomly and ahistorically shows up for a moment). So I figure this is the best of those six movies. It's distinguished from the others in focusing solely on the Northfield hold-up and in its general approach of humorous mockery. Nearly everyone gets painted as players in an absurd historical episode in this movie. Jesse, for one, is depicted as a near-delusional blowhard, which is refreshing, though Cole Younger instead gets the heroic treatment, which detracts from the revisionist flavor.

17. The Ballad of Buster Scruggs (2018)
I've found in the past that nearly every Coen Brothers movie improves upon a repeat viewing, and this is no exception. Seeing it for the second time, I was better able to appreciate the way the six stories interweaved thematically. An excellent movie.

And that's it. Good times. Let's do it again next year.
Top

Quite violent, but I found it to be a very suspenseful and dark western, and I love the score by Riz Ortolani. Probably a challenger in my 500<400 list this year...

Final update for me. I had a great time again. Thanks for hosting, shugs!

I'm sure you are aware of this cinephage but it was Maurice, and not Jacques. Great looking film. I do need to see more silent westerns.
That's all, folks!
Top

I must say it was a great movie. I strongly recommend The covered wagon, by James Cruze. If you haven't seen it, it's quite a good silent western.
Top

I must say it was a great movie. I strongly recommend The covered wagon, by James Cruze. If you haven't seen it, it's quite a good silent western.

Always glad to get recommendations. I'll make a note of it for next year. Thanks!
That's all, folks!
Top 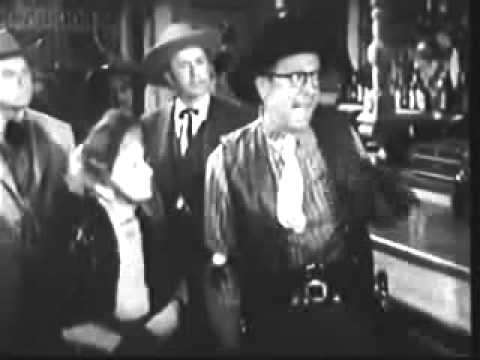 This gets off to a hilarious start with Phil Silvers visibly unnerving his opponent by eating an egg and staggering about blind without his glasses on, and things only get funnier as he is made sheriff and takes absurd measures such as excluding gunslingers from glee clubs to avoid fights (!) and calling them "naughty, naughty, naughty", which just baffles everyone. Where the film really takes off though is with the introduction of Jack Benny near the end.

Thanks for the recommendation, 'beatnik. That was awesome. And a good final note to end the challenge on.

Yep. I'm hanging up my boots. Thanks for hosting shugs, and providing amazing stats as always. I actually have a few hours left before midnight, but this Challenge has really drained me this month (indulging in way too many mindless B westerns) so I would rather not cram anything else in. Others will overtake me on the leaderboard, I know, but much like Henry Fonda's sheriff in My Name is Nobody (what a great film that turned out to be), I would much rather peacefully fade out rather than end on a bang.

Glad you enjoyed it, sol. This was one of the films that I watched this month that I really found funny and laughed or chuckled a lot while watching. Silvers and Benny were both at the top of their game and very funny.

I think the only person who really ended on a bang this month was Punq!

And that's it for me, pardners. I ended on both a low and a high note this time. Two Beaudine B's that were not as much fun as I remembered - although I still love the bat with a top hat - and one of my favorites which held up just fine.

Thanks for the stats, shugs, I really enjoyed perusing them. Thanks for hosting too!

And congrats to punq for pulling a lot of B westerns out of your hat at an incredible pace.

Very bloody - horror-film type bloody, really, and I've seen this film listed as "horror" at times - western about a group of convicts being led from one prison to another through mountain passes by a Sergeant and... his teen-aged or early-twenties beautiful daughter! There IS an explanation for why she's along at one point, but it's not convincing - seems mostly to have an excuse for a rape scene, frankly. And much of the rest of the plot is either silly (gold chains?) or muddled, but still there's a certain way in which the nihilism here works and the slow whittling down of the group is accomplished in some interesting ways. By spaghetti standards it ends up pretty average in quality I'd say, but it's certainly a bit different from your usual Euro-western of this time so props for that.

I'm gonna guess 7th or 8th viewing. What to say about this film that hasn't been said? It's my favorite Mel Brooks film and probably my favorite western comedy, or at least my favorite where the emphasis is clearly on the humor. Because it's a parody and spoof of not just westerns but other film tropes of the period - like blaxploitation - and because it has both a broad brush and plenty of little subtle bits, it gets better for me every time, or at least I get more of the jokes with more film knowledge to bring to it. I don't think I knew "Van" Johnson last time, for instance, and Cleavon Little's "urban" attire and attitude make more sense to me now after a whole lot of Jim Brown and Fred Williamson under my belt. And the title song by Frankie Laine is, for my money, the best western theme song ever - serious or not:

Yesterday was this guy's 90th birthday: 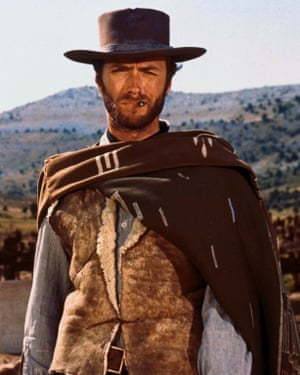 so I decided to finish with

Probably about the 10th viewing. I saw this 6 times first run; I think it was the first film I'd seen that many times in the cinema since Star Wars 15 years earlier, and it's still one of the ten films I've seen the most in the cinema and probably one of about 20-25 that I've seen at least 10x total. It made me a Clint Eastwood fan, I guess for life because I haven't abandoned him yet. But this was the first viewing in at least a decade and it was bittersweet; I wanted to re-watch it with my mom, but never got around to it. I suppose I delayed for a long time because I was afraid it wouldn't hold up, that happens sometimes, and my opinion of Eastwood in general has taken something of a downturn in the last 7-8 years, and not just because of his politics. But I needn't have worried; while this still comes in second to The Outlaw Josey Wales among the westerns he directed, and a certain 3-hour Italian film with Eli Wallach and Lee Van Cleef is probably also ahead of it, this remains a pretty terrific film, a melancholy and pessimistic work to be sure but one leavened by just enough humor and even moments of possibility (maybe the Schofield Kid turns out all right after all?) to keep the overall dour mood from overwhelming. I had in fact forgotten a lot of the humor - I especially like Gene Hackman's Little Bill, one of the funnier psychopaths around, as he's talking to Beauchamp (Saul Rubinek) about what REALLY happened with English Bob and that guy in the bar he killed that time. Pretty near perfect casting, lovely understated score by Lennie Niehaus (a longtime Eastwood collaborator who passed away this weekend, just short of his 91st birthday), beautiful and typically dark and naturally-lit Jack Green cinematography. It's only maybe my 4th or 5th favorite Clint film but I can totally see why it has become his masterpiece in the eyes of so many critics, particularly those with an affinity for westerns. Not that it has anything particularly novel to say, not that even it's pretty harsh take on violence and it's relationship to drinking and the follies of youth is anything new, but the old theme of the end of the west and the problem of the gunfighter has only rarely been done as well, as brutally, as sadly.

That's all for me, hanging up the saddle on this one. Thanks for running it shugs!
Top

(Screenshots from Ford's magnificent, moving, redemptive, even mystical parable, '3 Godfathers' and from Lewis's compelling and unflinching 'Terror in a Texas Town; a film that in its own stark and stoic way poeticizes the West and its tragedies, its power dynamics and its possibilities...) 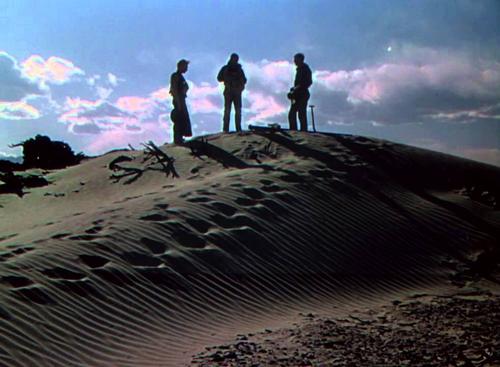 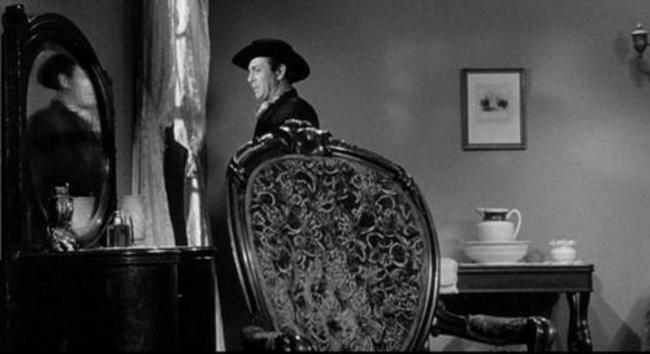 Thank you for hosting, shugs. It was a lot of fun once again. I'm already looking forward to Western month 2021!

Sad to hear of the death of Lennie Niehaus. I loved and admired his work with Eastwood over those many decades.

Thanks for mentioning it, Ale.
That's all, folks!
Top

Howdy cowboys! The challenge is now officially over.

Congrats to PUNQ for winning, followed closely behind by psychotronicbeatnik and the one and only AssonFire, and to everyone for participating!

Stats! They include only features, no love for anything else.

We had 32 people participating in the challenge. A total of 739 points have been accumulated, for an average of 23.09 points per user.
There have been 560 unique films watched.
MOST WATCHED MOVIES
The most watched movie has been Lonesome Cowboys with 5 different watches.

MOST WATCHED GENRES
Western is the most watched genre.

MOST WATCHED COUNTRIES
USA is the most watched country.

MOST WATCHED YEARS
1946 is the most watched year, thanks to PUNQ, with 47 watches.