They need to get working on a release of Out 1 now.
Top

Out 1 is already licensed in the US. but appears to be OOP.
Top

Which could be a sign that the license changed/expired.
Top

Which could be a sign that the license changed/expired.

could be, but the label that released it, Carlotta USA, seems to have ceased operations (after a grand total of... four releases?), which doesn't necessarily mean they've lost licenses. Their parent company in Europe is still going strong. I imagine they'd be open to sub-licensing those films, but I also can't imagine Out 1 is at the top of any US boutique label's want list.
Top

Damn, OldAle is gonna love these announcements, I think the Rivette film and Defending Your Life are big favorites of his. I'm happy to see Secrets & Lies get a Blu-ray release, it seems to have been strangely hard to find on disc in the US for a film that was an Academy Award Best Picture nominee and a Palme d'Or winner.

Yes VERY happy with this. I have DYL on an old crappy DVD, and I have C&J on the pretty good BFI DVD from years back (R2) but I will definitely get upgrades for two all-time favorites for sure. I could imagine getting the Leigh and Mambety films also but they are lesser priorities and I probably ought to watch each again - likely saw them both only once, around the time the Liegh film came out and 25-year-old memories shouldn't be trusted. I'm interested in the WKW box too I guess but again, probably ought to watch a couple of those again (and I've never seen 2046). I have no problem with "blind" purchases (whatever that means) but am a little more skeptical when it comes to Criterion-type prices.

In any case one of the best months for the label I can remember.
Top

Another round of Criterion announcements. April releases:

And a couple of upgrades of prior releases:

Solid list though the only must-buy for me is Irma Vep. I feel like extras may make the difference with some of these, have to look more closely.
Top

I own the old Criterion DVD of the Godard and the Arrow Blu of the Assayas. Definitely want the Mann and the Bong. I'll check out the Borzage on the Channel first.

Fairly big Borzage fan here, this is not IMO one of his best, though to be fair I seem to be more critical of his sound work than a lot of people, and this is probably the second-best of his films from this period after The Mortal Storm.
Top

OldAle1 wrote: ↑January 15th, 2021, 8:11 pm Fairly big Borzage fan here, this is not IMO one of his best, though to be fair I seem to be more critical of his sound work than a lot of people, and this is probably the second-best of his films from this period after The Mortal Storm.

So far, the best film I've seen from him is No Greater Glory, which I really love. Interesting that you mention The Mortal Storm, because I just saw a friend mention it positively on Facebook in reference to this Criterion announcement. She's fond of Borzage and I like her taste in film.

Irma Vep is on HBO Max (which I recently got access to) last I checked, I haven’t seen the film yet but it’s one of those that’s been on my watchlist forever. So I’ll see it there before deciding if I want to get the Blu-ray.
I’m to remember every man I've seen fall into a plate of spaghetti???

Knaldskalle wrote: ↑November 29th, 2020, 9:33 pm Holy smokes! I only just learned that Pathe released a limited edition blu-ray of the restored version of Abel Gance's La Roue (1923) back in June. It's a 4-disc set with the movie now taking up 3 discs on its own and a runtime of 418 minutes (that's just short of 7 hours). By comparison, the DVD I saw some years ago was "only" 263 minutes, so they almost doubled the runtime. 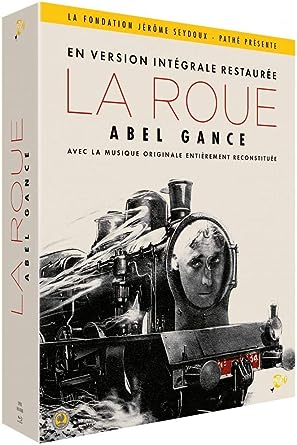 I really want this, but that price tag...

Does anybody know more about this? Is there a (cheaper) regular edition in the works? Does anyone know if it's scheduled for release in other markets (eg. Germany, UK, US)?

I got it for my birthday

I don't know when will be the next time I'll have 7 hours to spare but I'm looking forward to it
"Art is like a fire, it is born from the very thing it burns" - Jean-Luc Godard
Top

Latest round of Criterion Collection announcements - May releases:

Is that the first Hou Hsiao-Hsen film for Criterion?
Top

I watched a couple of Marlon Riggs's films last year. excellent stuff not only in content but form as well. Definitely going to pick that set up. Probably not the others.
Top

At least at this point, Riggs' whole catalog is on Kanopy. I watched three of his shorter films earlier.
Top

They are all on the Criterion Channel as well.
Top

No spinenumber. Should this be on the list?
ICM-profile
Fergenaprido: "I find your OCD to be adorable, J"
Top

I added 8 titles to the list. Pickup on South Street and Visions of Eight were already on the list.
ICM-profile
Fergenaprido: "I find your OCD to be adorable, J"
Top

I looked at this page:
https://www.criterion.com/boxsets/4430- ... -blackwell
I should have clicked one page further. I'll add them both.
ICM-profile
Fergenaprido: "I find your OCD to be adorable, J"
Top

I looked at this page:
https://www.criterion.com/boxsets/4430- ... -blackwell
I should have clicked one page further. I'll add them both.

Hehe, yeah, with those box sets you gotta delve further to the pages for the individual films within to check for the spine numbers. Thanks for updating the list!
I’m to remember every man I've seen fall into a plate of spaghetti???

Arrow released this on blu-ray some years ago and they used the old master that was also used for the Criterion DVD release. Reading the notes regarding the release, there's nothing about a new scan or anything, so it's entirely possible that it's the same old master again.

You can get the Arrow release for around 15 GBP, so that might be more appealing than the $30 price tag in July? The Arrow one does have a horrid cover, though...

I like these announcements. Never would have predicted a release of Deep Cover, that’s pretty cool.
I’m to remember every man I've seen fall into a plate of spaghetti???

Working Girls is a masterpiece and I hope this will give it the attention is deserves.
Top

Amazing it's taken so long for Bringing Up Baby and Mirror to hit Criterion. Rights issues I guess?
Top

brokenface wrote: ↑April 15th, 2021, 5:34 pm Amazing it's taken so long for Bringing Up Baby and Mirror to hit Criterion. Rights issues I guess?

Probably. Or, in the case of very well-known and already-many-times-released films like these, the desire to have the best transfers. I just wish they'd put out a box of all the Tarkovsky films and get it done (ideally including all shorts) so I don't have to keep waffling over whether to buy individual releases. For that matter a box set of the 4 Grant/Hepburn collaborations would be pretty cool.
Top

I just bought the Artificial Eye release of Mirror... Oh well. Not a fave anyways. I just hope someone will put out a good release of Nostalghia and Offret soon. Both are supposed to be in rough shape on their respective blu-ray releases.

Has Mirror really been released that much by other publishers? I am only aware of a couple other releases. Bringing Up Baby, on the other hand, has what seems like hundreds of different versions available.


I agree with Knaldskalle, I would rather have a nice updated version of Nostalghia.

Well, this will be the first Blu-ray of Bringing Up Baby anywhere in the world. And having watched the Warner DVD from the mid-00s a few months ago, this new 4K restoration should be a huge improvement. I'm not an A/V snob, but the old transfer has not aged well.

As for Mirror - I believe the only previous versions in R1 were a long OOP Kino DVD and a release by Ruscico, whose DVDs tend to be about on par with Facets in terms of quality (ie, slightly better than VHS.) It has fared better in the UK, though.

It's one of my top 20 movies, and I still only have the old Artificial Eye DVD - so this will be an easy upgrade for me.
Top

I must say, I'm digging their slightly more adventurous announcements of the past few months. I hadn't even heard of Working Girls, Deep Cover, or Streetwise.
Top

Timec wrote: ↑April 16th, 2021, 12:34 pm I must say, I'm digging their slightly more adventurous announcements of the past few months. I hadn't even heard of Working Girls, Deep Cover, or Streetwise.

I think they all fall very broadly into the category of films that were well-known when new and recent, in this case in the 80s and 90s, but that have largely faded from view. And perhaps they never got much traction outside the USA. When I worked in video stores from the late 80s to the late 90s, they were certainly all mainstream titles that all of our stores carried - even Streetwise, though a documentary about a subject some of our mostly well-to-do customers wouldn't much care about, was a fairly "popular" film within at least the doc niche.
Top
Post Reply
1077 posts